The traditional, somewhat stereotypical image of the researcher of things past has not changed much in recent times. There is nothing easier than to imagine a scholar sitting at a scarcely illuminated wooden desk, surrounded by piles of old hardbound volumes, spending hours on end rummaging through the sheets in search of a clue.

In the field of eighteenth-century studies, this is certainly still the case. Scholars often go on a pilgrimage to prestigious repositories such as the British Library. However, in the last fifteen years or so, technology has started to offer attractive alternatives to the pleasure of travelling to London. Powered by Gale-Cengage, the Eighteenth-Century Collections Online (commonly referred to as ECCO) is a well-known resource that provides access to English-language and foreign-language publications printed in Britain, Ireland and the American colonies during the eighteenth century. This extensive collection contains over 180,000 titles (200,000 volumes) and allows full-text searching of some 32 million pages. These are digital editions based on the Eighteenth Century microfilming that started in 1981 and the English Short Title Catalogue. 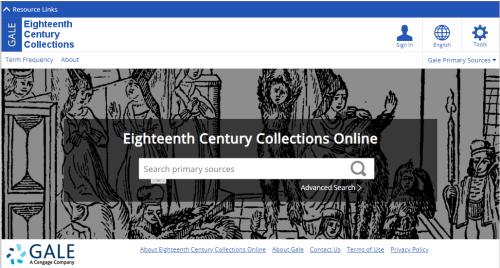 Moving away from its classic web-1.0 design, the Gale-Cengage team recently decided to revamp the layout of ECCO – indeed, of their entire portfolio of archive products, which include among others the Seventeenth- and Eighteenth-Century Burney Newspapers Collection. The aim is to make the Gale Primary Sources experience more consistent and intuitive for the user. At the head of this delicate operation are product managers Doran Steele and Megan Sullivan, who lead a nine-person team of software developers, content engineers, researchers and designers. Not quite the IT-only type of personnel, Doran and Megan are scholars themselves, respectively holding degrees in History and Information Science and a remarkable passion for all things past. They are responsible for the maintenance of the existing ECCO interface, as well as the development of the upcoming design refresh.

During a recent interview they gave to the authors of this post, Doran and Megan declared their objective of evolving ECCO in line ‘with user expectations of modern online research experiences’. Their driving force was stated very clearly as a bottom-up process. ‘This redesign’, they explained, ‘is informed by user feedback and market research’. A beta version of the new site has been available since the second half of 2018 to enable the Gale-Cengage team to gather feedback about the new design. The product managers specified that the final transition to the ‘new’ ECCO will only be completed once they feel confident that the new experience ‘successfully meets the needs of our users’. The final goal is a better user experience, ‘one that is faster and more intuitive’. To achieve this, a range of new features have been included, such as more filters on search results; results more relevant to the search queries; data visualization tools; improved subject indexing; more options for adjusting the image; and the ability to download in a text format the OCR (optical character recognition) version of a volume. The latter feature will be a particularly welcome innovation for scholars that often need to look up the occurrence of a single word or cut and paste long chunks of text. 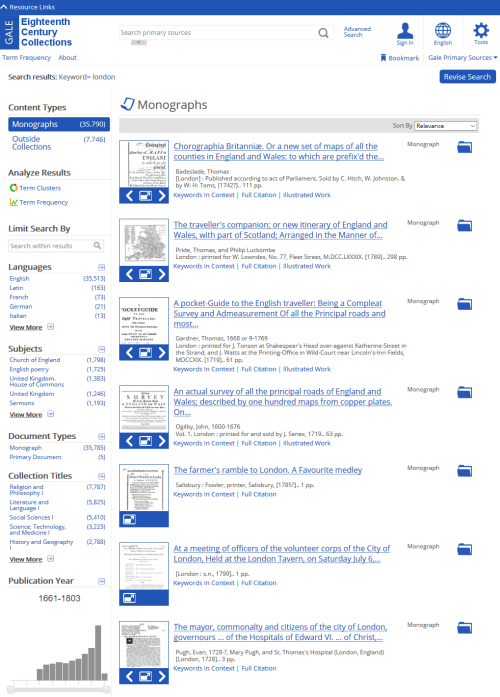 The options for adjusting the page view are another significant novelty. The beta version boasts new settings to quickly select the preferred zoom level, as well as sliders to increase or decrease the brightness and contrast of the page. These improvements are particularly welcome considering that the quality of the scans remains unchanged. The page quality is not directly related to ECCO. The portal simply allows the consultation of the digitised microfilms included in the first collection (also known as ECCO 1, comprising over 154.000 texts) and the digitisation of a second, smaller collection of books (ECCO 2, over 52.000 titles). This raises an important issue. A plethora of relatively unknown, yet precious eighteenth-century material remains difficult to consult because, on top of the uneven quality in the texts that came out of eighteenth-century printing presses, the original microfilming technology that was employed for the first collection yielded relatively low-resolution results. This causes some hiccups with OCR recognition, thus discouraging the use of quantitative methodologies. But the issue is all the more salient when the category of eighteenth-century visuals is taken into account. At a time when British engravers multiplied in numbers to illustrate the newly-discovered wonders of the natural world or the archaeological remains of Roman cities in England, illustrations became an essential aspect of the eighteenth-century book market and reading experience. While for essential texts such as William Stukeley’s Itinerarium curiosum (1724) or Eleazar Albin and William Derham’s A Natural History of Birds (1734) more refined scans can be found elsewhere, a large number of texts is digitally available only through ECCO 1. Scholars interested in images are either to focus on well-known texts that have been digitised by other providers – with serious consequences in terms of canonicity – or eventually need to plan a visit to major libraries to consult the relevant volumes in person, somehow defeating the very idea of digital reading. Either way, the study of visual culture is somewhat inhibited. Nevertheless, the ‘new’ ECCO promises to enhance the user experience and to offer even more opportunities to engage with outstanding repositories of primary material. If you already had a chance to use the new version, we encourage you to get in touch with Doran and Megan: as your feedback and suggestions can improve ECCO even further. 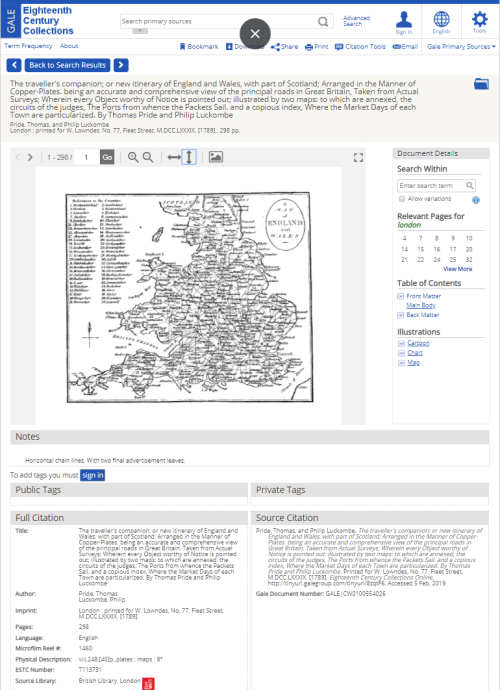 Posted by Digital Research Team at 11:15 AM