On 7th February 2019, the Imaging Team from the British Library Qatar National Library Partnership drew up the blinds in the studio and turned it into an artist’s workshop once again for our second Hack Day. The team produced their Hack ideas and responded creatively to the collection items we are digitising and uploading to the Qatar Digital Library under the theme of International Women’s Day. Taking place on 8th March, we worked a month in advance in order to ensure our ideas could develop and be ready to share in time. International Women’s Day is celebrated globally and aims to end worldwide discrimination. The day is also dedicated to celebrating the social, economic, cultural and political achievements of women now and in the past. 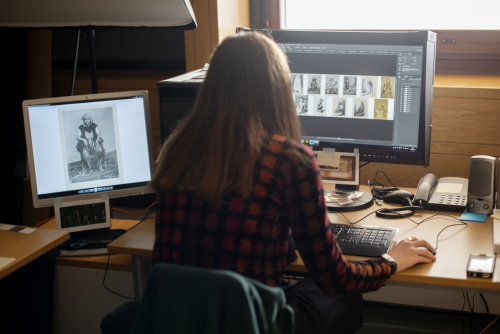 To advertise the Hack Day, Hannah Nagle produced a leaflet and two posters that superimposed information about the upcoming day onto images of items from the collection. The posters included details about the Prep Session on 24th January. This was a productive meeting where we were able to give informal presentations to our colleagues on the project and staff from the wider library. It allowed us to exchange ideas, receive feedback and talk about possible collaborations between staff (while also feasting on Hack Snacks provided by Sotirios Alpanis). 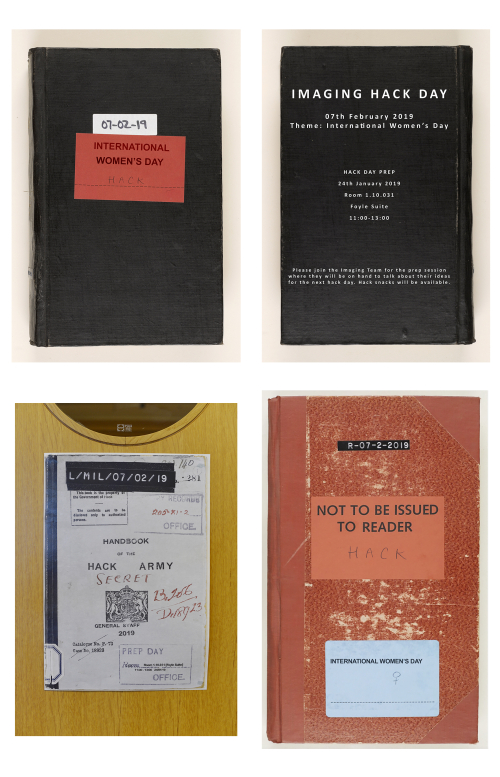 In the final run up to 7th February, clear themes and patterns in our approach had already begun to emerge. As you will see below, many of us wanted to bring light to stories about women, empower the photographs of women who will forever remain nameless and bring focus to the idea of gender within the collection.

Both Rebecca Harris and Daniel Loveday created visuals to be used on social media platforms to replace profile pictures and banners during the build up to International Women’s Day. Dan used the International Women’s Day logo to create a GIF. Within the logo it flips through portraits of women we have very little information about from the archive. ‘I thought this would be a different way to explore how to empower our nameless women.’

Rebecca created a banner and five interactive photographs. ‘Both works are intended for use on Twitter and have been designed to draw traffic back towards the Qatar Digital Library and specifically the women found within it.’ Rebecca used the application ‘Thinglink’ to create the interactive photographs seen in the screenshot below. You can also see the banner in use on the @BLQatar Twitter page: https://twitter.com/BLQatar 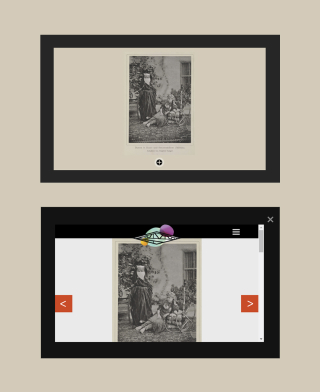 Jordi Clopes took a different approach and decided to focus on handwriting. Taking two letters written by Ms. Ruth Honor Hotblack, he extracted, resized and saved the individual characters to create the new and personalised ‘Ruth Honor Typography’. With some characters missing, Jordi created these in the style of Hotblack’s handwriting. Using the app ‘Calligraphr’ to create the font, Jordi wrote a piece of text and then superimposed it onto an image of an empty page from a book in the collection. You can see an example of the letters Jordi used and Jordi’s font in the images below.

‘With more time and by using another female author more prolific in the collection, a nicer font could be created and, like the ‘Ruth Honor Typography’, could be installed onto any computer to be used in text editing software like Microsoft Word and Outlook.’ 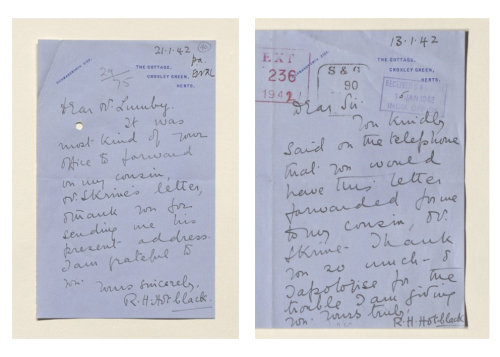 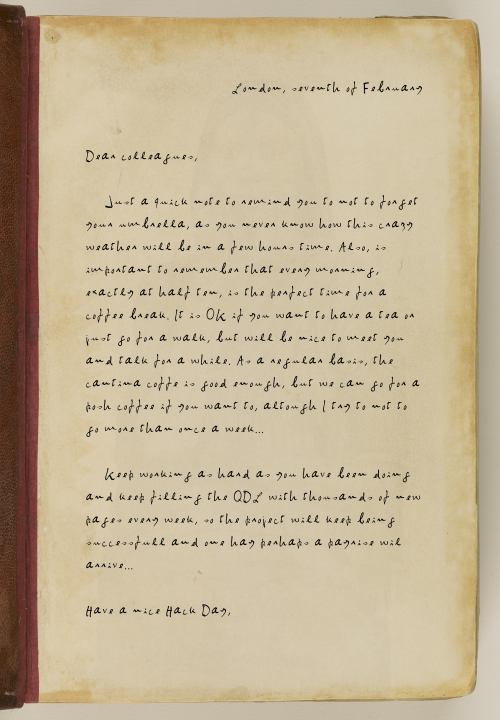 Hannah Nagle chose to focus on data visualisations. Using the Qatar Digital Library, she collected a set of data on the reliability of the search engine to source photographs of women. Using this information Hannah created a zine called ‘She Was Here’. Its aim is to highlight photographs of women in the collection, particularly where the search engine has not given them appropriate prominence. The zine is also a collection of experimentations on representing data in imaginative ways. These include collages and manipulating photographs to highlight the women in the photographs. The first half of the zine explores the data through graphs and statistics while the second half is a creative exploration of the photographs of unnamed women from the search results. Hannah used visual techniques to comment on the lack of information recorded about them while giving them space and focus outside of the archive.

Darran Murray worked with four studio portraits of enslaved women. ‘These images have no identification of who they were, where they came from, where they were enslaved, or anything about their experience. For the Hack Day I incorporated new imagery and text into these images in the hope that the images used will provoke the viewer to re-think how they consider these women.’

Our Quality Assurance Officer worked on her project ‘Sounds of the Past’, aiming to showcase the lives and songs of female singers in the Arab world. The project focuses on the singers whose songs can be found in the Qatar Digital Library’s sound archive. The application used is Esri’s ArcGIS Story Maps and helped to create a more engaging and interactive narrative with text, images, sound and videos. 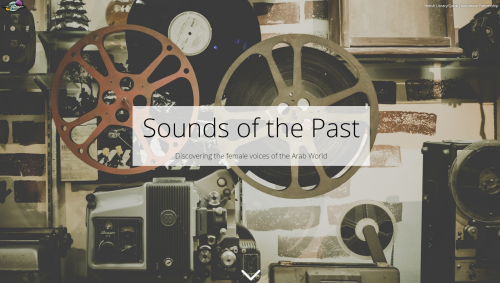 ‘These women each took to the practice of letter and journal writing to record their day-to-day experiences - a highly mediated activity where the author wrote with their audience in mind and constructed their texts according to how they thought their lives should appear.’ In the future, Melanie wants to include interaction between these accounts to emulate the relationships these women would have had in real life via comments and likes. Melanie also wants to consider how these women would exploit social media platforms to fulfil their own personal missions. Watch this space and follow the link for more posts from Lady Curzon: https://www.instagram.com/lady_mary_curzon/

Matt Lee’s work for both this and the previous Hack Day explored alternative ways of drawing meaning from the collection items we digitise. ‘Since our first Imaging Hack Day, my aim has been to create a range of visual typologies from elements such as stamps, typography, colours and textures. By collecting and organising visual elements by general type I hope to provide a perspective of the collection items that we otherwise would not notice.’

For the second Hack Day, Matt created images that place, in sequence, every written description or mention of gender within randomly selected collection items. The result is a visual tapestry that shows the quantity and types of words that are used in reference to gender. To differentiate between the two genders one has been inverted. 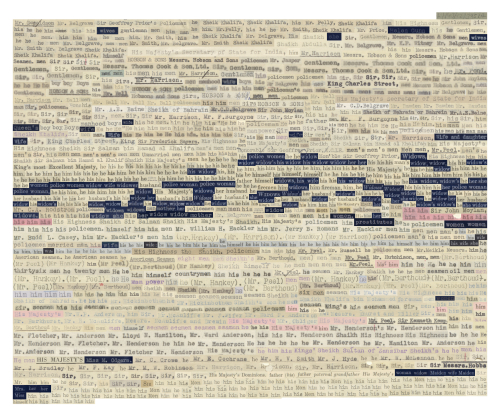 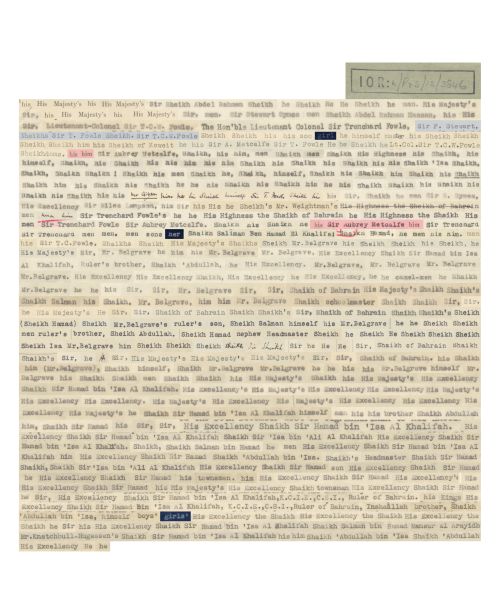 If you would like to explore the photographs and documents used in our Hack Day creations from the Qatar Digital Library or find out more about the India Office Records please follow the links below:

You can also read about our first Hack Day in the blog posts below:

Posted by Digital Research Team at 9:54 AM