The Emerging Formats project, started in 2017 by the British Library and the other five UK Legal Deposit Libraries, has been investigating the rise of new complex digital publications that could pose new challenges for libraries and other cultural institutions in terms of collection and preservation. In particular, this project has chosen to prioritise three formats: eBook mobile apps, web-based interactive narratives, and structured data.

These formats reflect the changes and developments in both technology and storytelling in contemporary digital culture. This project meets the Legal Deposit Libraries’ purpose to respond to innovation and to represent the changing nature and diversity of the UK publishing industry. It also fulfills the libraries’ role of long term preservation, as these formats are by their technical nature ephemeral and at risk of loss.

After holding a workshop last November to better define the challenges related to complex digital objects preservation, the British Library organised a series of user experience testing sessions, with the help of an external consultant, Bunnyfoot Ltd. A first round of interviews was carried out at the British Library and at the library of Trinity College Dublin and it identified a strong user interest in collecting and preserving emerging formats, which was later confirmed by two service design group workshops at Bunnyfoot Lab. 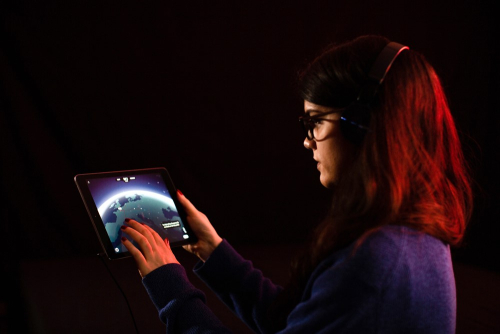 Interacting with the 80 Days app for iPad

We are now in the process of testing different collection management methods, using a number of publications selected during the scoping phase as case studies. For example, we are collecting Inkle’s eBook mobile app 80 Days in different file formats (Android app; PC version) and through different acquisition methods (file transfer; download via access code) to test their viability and the different implications they might have in terms of access and preservation. 80 Days is a narrative-based interactive adventure, which offers a unique take on Jules Verne’s Around the World in Eighty Days – set in an alternative steampunk universe, the story requires the reader’s active participation in order to progress, with thousands of different routes and possible outcomes.

In the case of capturing web-based interactive fiction, two different web archiving tools have been tested – The British Library’s own Annotation and Curation Tool (ACT) and Rhizome’s WebRecorder. While each tool has distinct characteristics which might make it more suitable to a specific type of interactive fiction, both tools proved effective in capturing web-based narrative to a degree. A collection around the topic of e-publishing trends and emerging formats is currently being developed on the UK Web Archive website, with the possibility of nominating yours or someone else's work for inclusion.

As well as investigating collecting methods for complex objects, we are also exploring the requirements for access. At present, only the websites that we have collected using our ACT tool are available in the Library. We are also exploring the possibility of collecting contextual information around these publications. Collecting descriptive material around an object has been tried for time based digital media and digital games. Capturing and preserving sources of information such as websites, trailers, and press kits might prove invaluable in clarifying authorial intent and object use once a format is obsolete or cannot be accessed anymore.

To find out further information about the Emerging Formats project, please see our project page.