According to Tate, Net Art is art which uses ‘a computer in some form or other, whether to download imagery that is then exhibited online, or to build programs that create the artwork.’ Tate’s recent event, Lives of Net Art, sought to explore some of these unique digital works and the challenges and opportunities associated with creating, curating and collecting them. Highlights included Tate in Space, a BorderXing Guide and Rhizome’s preservation tools and goals.

Tate in Space was a 2002 project by Susan Collins which imagined how and why a British art institution might launch a gallery into space. Essentially an ARG (Alternate Reality Game) before they were a known concept, Tate in Space worked almost too well. Various newspapers, particularly those overseas, took the tongue-in-cheek work at face value and reported as if Tate really had launched a satellite. This provoked concern from the British National Space Centre, who got in touch to ensure all the necessary permissions had been obtained…

Heath Bunting’s BorderXing Guide considered space in an entirely different manner – the spaces between countries and how they are interpreted. Visiting borders across Europe and exploring their viability for making crossings, Bunting meticulously recorded his journeys and made them available via his website. Naturally, border agents became very interested in Bunting’s movements, and this led to his next work, The Status Project, an online database cataloguing how our identities are constructed from the information held about us.

What both these pieces had in common was that the ‘work’ could not be reduced to its website. Experiences outside of the work, reactions to the work (both public and governmental) and related online and offline content all come together in order for the viewer to contextualise it and make sense of it. They are net art not only in the sense of the technology used in part of their construction, but also in the sense of the network of meaning that radiates from them. It is this that Rhizome attempts to, at least partially address with their Webrecorder tool, a curation tool capable of capturing dynamic websites and online content.

Webrecorder also enables the building of collections so that net art can not only be captured on the website on which it appears, but also in relation to other articles, sites and data that help to frame the work for audiences viewing it outside of its original context. However, Preservation Director Dragan Espenschied was keen to stress that such collections can perhaps never truly recreate the work as it was, but instead aim to create a more fitting record of its existence than merely collecting software and hardware. 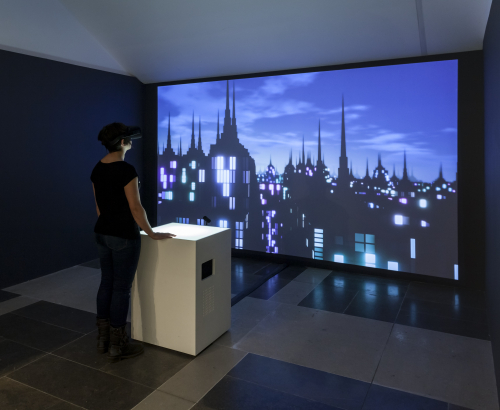 The British Library may soon face a similar challenge for its latest exhibition, Imaginary Cities by artist in residence Michael Takeo Magruder, which opened on 5th April and is on display until Sunday 14th July 2019. Drawing on 19th century maps found in the Library’s One Million Images from Scanned Books collection, the installations not only reflect real world cities and the techniques and practices involved in their construction, but also the digital structures associated with cityscapes, which change and regenerate via the user data of their visitors. Can such a work ever be considered to have been collected? Or, like the cities it seeks to represent, will it leave only a digital footprint of a highly specific experience?