Our highlights from Digital Humanities 2019: Mia and Yann

In this series of posts, Digital Curator (and Co-Investigator on the Living with Machines project), Digital Curator Dr Mia Ridge has collected impressions of the Digital Humanities conference, held in Utrecht from July 8 - 12. In this post, Mia and Yann Ryan, Curator, Newspaper Data, share their impressions. See also Rossitza and Daniel's post, and Nora and Giorgia's post.

As my colleague Rossitza posted beforehand, a lot of the Digital Scholarship team were at the DH2019 conference. Before we left, I asked everyone to note which sessions they were looking forward to, what they'll bring back from the conference to work, and anything interesting or cool they spotted at the conference.

I’d reviewed some conference proposals so I knew there’d be lots of interesting talks, but I was particularly looking forward to lots of conversations at the conference - some online, some in person. (Apparently I tweeted quite a lot). A lot of those conversations ended up being around improving the discoverability and research experience with digitised newspapers. There was a strong theme around thinking about cultural heritage organisations as partners in research rather than simply as ‘data providers’. If you’re a researcher or GLAM practitioner who’d like to continue the conversation, join the Periodica discussion list or check out notes from the impromptu meetup on the Friday at DH2019 Lunch session - Researchers & Libraries working together on improving digitised newspapers.

I went to some sessions that were outside my usual areas of focus (media studies, VR/AR) and others that were familiar territory (designing data structures, working with union catalogue data). I’ve shared my more detailed but very rough and ready DH2019 conference notes on my own blog. Finally, I really enjoyed the 'Libraries and DH conversation', and both the libraries and newspapers conversations will inform my work in digital scholarship and on Living with Machines. 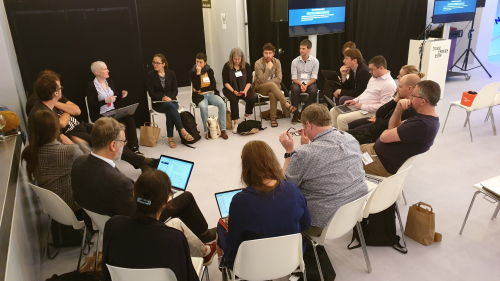 DH2019 was my first mega-conference and I found it a really useful, if overwhelming experience. Picking talks was a bit like trying to work out your schedule at Glastonbury: at both it’s worth keeping in mind you’re always going to miss something, and anyway the best bits always happen in the spaces in between: whether that is browsing the posters or just hanging around the communal area chatting to new friends.

It was fun to see the ways in which derived newspaper data – word embeddings, named entities and so forth – are being used by researchers in practice, and I loved hearing about the ways in which this material is bringing new insights to historical themes and concepts. It was also a great place to learn about new projects: I was particularly excited by the Impresso project (a platform for browsing digitised newspapers) and the Amsterdam Time Machine.

I learned a great deal about how researchers are working with data, as well as the format and size of newspaper datasets they need or expect. The Heritage Made Digital project will release open datasets based on the newspapers we’re digitising, and hearing how others are using similar material will help to inform the best way to carry that out.

My single favourite thing was Repetition And Popularity In Early Modern Songs, a poster for a project which measured the repetitiveness of early modern song lyrics against the number of times they were reprinted. Turns out more repetitive songs got reprinted sooner and lasted longer, which is a bit like modern pop music!

Posted by Digital Research Team at 10:09 AM