A New System for the Digital Paleography of Middle Eastern Manuscripts

For much of the Middle Ages, the world’s most geographically expansive church was one that few in the twenty first century have ever hear of. Stretching from Turkey, throughout the Middle East, into Afghanistan, Tibet, India, and even China, the Syriac Church of the East reminds us that, for much of church history, the geographic center of Christianity was not in Rome, nor in Constantinople, but rather in Baghdad. But this particular church was only one of many ancient churches whose members did not write in the relatively well-studied languages of Greek and Latin but rather in a dialect of Aramaic called Syriac. The British Library has the world’s largest and most important collection of manuscripts from these Syriac churches. This corpus of almost 1100 Syriac codices includes the majority of the earliest surviving texts from these churches. But in order to properly analyze these works one must first figure out when and where they were written.

Because only a few libraries allow for the carbon dating of their materials, the most common way to localize a manuscript in space and time is the analysis of its handwriting, a practice called paleography. Paleography will always remain as much an art as a science. But at its base, much of paleography is shape comparison, a task that in recent years computers have become increasingly good at. Starting in 2011 I began assembling a forty-seven-person digital humanities team to explore the feasibility of computer assisted paleography for Syriac. That is, could one use big data, visual analytics, and recent advances in the digital analysis of handwriting to better understand Syriac manuscripts and Syriac manuscript culture.

This June we launched the first public-facing part of our project titled the “Digital Analysis of Syriac Handwriting” or DASH. DASH consists of digital page images from 152 manuscripts distributed across thirteen libraries each with a scribal note telling us when they were written. Together these constitutes 90% of the world’s surviving Syriac manuscripts securely dated to before the twelfth century. DASH also has just under 90,000 individually identified and trimmed early Syriac letters. This extensive data on Syriac handwriting allows scholars to better estimate the composition date of other Syriac manuscripts as well as to explore the overall development of Syriac script.

Using the DASH interface one can view these manuscripts in a Stanford designed manuscript viewer called Mirador. Below is a screen shot showing four British Library manuscripts all written in the opening years of the eleventh century by a scribe named Jeshua son of Andrew. They provide a rare opportunity to observe how consistent a scribes handwriting may be across manuscripts they wrote at different times. 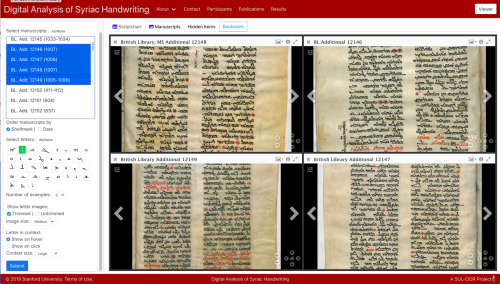 DASH also creates instant script charts allowing one to rapidly compare individual letter forms. Below are the beginnings of such a chart tracing Jeshua’s handwriting across the same four manuscripts. Using DASH one can also look beyond a single scribe and instead trace the chronological trajectory of multiple letters and their relationships to each other. This allows scholars, for the first time, to fully visualize how Syriac scripts developed. 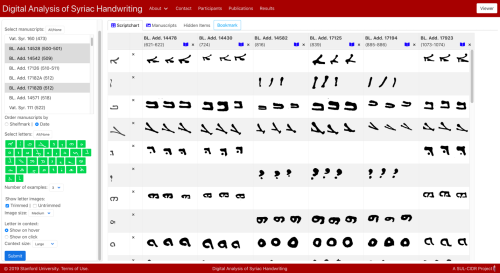 This data has already revolutionized our understanding of Syriac. Open-source and with its code on GitHub, the project’s most far-reaching goal, however, is to serve as a template for digital paleography work in other language groups. So regardless of your own knowledge a Syriac, take a quick peek at dash.Stanford.edu. Play with some gorgeous manuscripts from the British Library and other depositories, leave a comment on the website, and contact us if our team can be of help as you develop your own research projects.

Posted by Digital Research Team at 10:10 AM