Are you working with digitised printed collections that you want to 'unlock' for keyword search and text mining? Maybe you have already heard about Transkribus but thought it could only be used for automated recognition of handwritten texts. If so you might be surprised to hear it also does a pretty good job with printed texts too. You might be even more surprised to hear it does an impressive job with printed texts in Indian scripts! At least that is what we have found from recent testing with a batch of 19th century printed books written in Bengali script that have been digitised through the British Library’s Two Centuries of Indian Print project.

Transkribus is a READ project and available as a free tool for users who want to automate recognition of historical documents. The British Library has already had some success using Transkribus on manuscripts from our India Office collection, and it was that which inspired me to see how it would perform on the Bengali texts, which provides an altogether different type of challenge.

For a start, most text recognition solutions either do not support Indian scripts, or do not reach close to the same level of recognition as they do with documents written in English or other Latin scripts. In part this is down to supply and demand. Mainstream providers of tools have prioritised Western customers, yet there is also the relative lack of digitised Indian texts that can be used to train text recognition engines.

These text recognition engines have also been well trained on modern dictionaries and a collection of historical texts like the Bengali books will often contain words which are no longer in use. Their aged physicality also brings with it the delights of faded print, blotchy paper and other paper-based gremlins that keeps conservationists in work yet disrupts automated text recognition. Throw in an extensive alphabet that contains more diverse and complicated character forms than English and you can start to piece together how difficult it can be to train recognition engines to achieve comparable results with Bengali texts.

So it was with more with hope than expectation I approached Transkribus. We began by selecting 50 pages from the Bengali books representing the variety of typographical and layout styles within the wider collection of c. 500,000 pages as much as possible. Not an easy task! We uploaded these to Transkribus, manually segmenting paragraphs into text regions and automating line recognition. We then manually transcribed the texts to create a ground truth which, together with the scanned page images, were used to train the recurrent neural network within Transkribus to create a model for the 5,700 transcribed words. 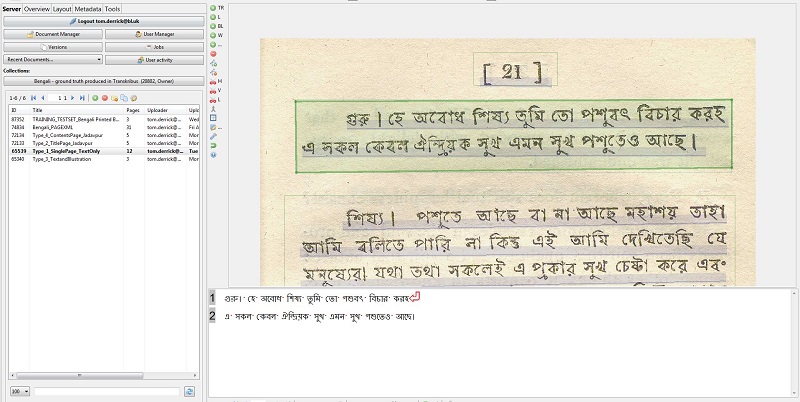 Screenshot of a page from one of the British Library's Bengali books within the Transkribus viewer showing segmentation of the page by green bounding boxes around paragraphs and underlined text lines. Typed transcriptions of the text are shown below the page image.

The model was tested on a few pages from the wider collection and the results clearly communicated via the graph below. The model achieved an average character error rate (CER) of 21.9%, which is comparable to the best results we have seen from other text recognition services. Word accuracy of 61% was based on the number of words that were misspelled in the automated transcription compared to the ground truth. Eventually we would like to use automated transcriptions to support keyword searching of the Bengali books online and the higher the word accuracy increases the chances of users pulling back all relevant hits from their keyword search. We noticed the results often missed the upper zone of certain Bengali characters, i.e. the part of the character or glyph which resides above the matra line that connects characters in Bengali words. Further training focused on recognition of these characters may improve the results.

Screenshot of a graph showing the learning curve of the Bengali model using the Transkribus HTR tool which achieved 21.91% character error rate

Our training set of 50 pages is very small compared to other projects using Transkribus and so we think the accuracy could be vastly improved by creating more transcriptions and re-training the model. However, we're happy with these initial results and would encourage others in a similar position to give Transkribus a try.