In this post, Nicolas Moretto, Metadata Systems Analyst at the British Library, reflects on his work trip to India.

Earlier this year I was given the opportunity to attend a workshop on “Digitisation Workflows & Digital Research Studies Methodologies” held at the National Centre for Biological Sciences (NCBS) in Bangalore, India.

The workshop, which was held on the NCBS campus in the northern part of Bangalore, was jointly organised by Tom Derrick (Two Centuries of Indian Print - 2CIP) and our host Venkat Srinivasan who is the archivist at NCBS. Tom represented the 2CIP project while I attended to cover different metadata aspects. The event was attended by colleagues from 26 different institutions. Tom and I were kindly provided with accommodation on the campus. 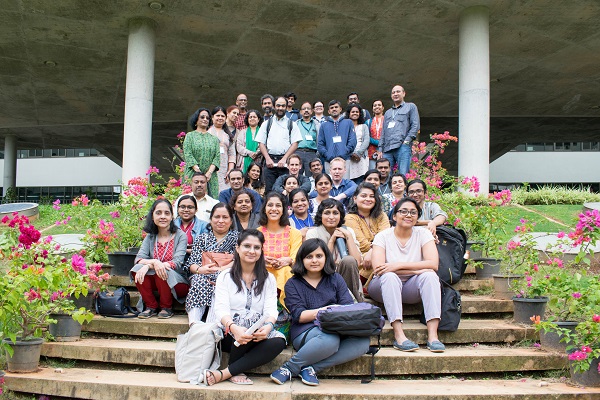 Attendees of the workshop outside the NCBS main building

The workshop was intended as an opportunity to learn more about cataloguing, digitisation and OCR, and for the Indian participants to meet colleagues from Bangalore and other parts of India, share experiences, exchange ideas and discuss common standards and best practices. The chance to meet with colleagues working on similar activities – and encountering similar challenges – was an important aspect of the workshop. Most attendees were not professional archivists but had come into archives from academic and other backgrounds and had been exposed to archives and cultural heritage in different ways. All participants shared a high level of enthusiasm for archives and a passion for preserving cultural heritage and the memory of their communities. 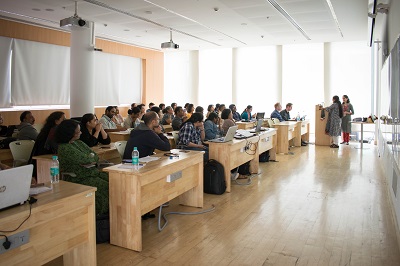 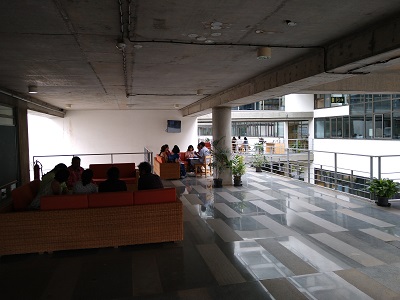 On the left: The Safeda Room at NCBS. On the right: the NCBS campus offered space for discussions during the breaks

The topics of the two-day workshop ranged from talks on description and arrangement of material (archival and related discovery standards), presentations on specific projects to digitisation workflows and OCR. Tom gave a practical demo of OCR tools for Indic scripts. I gave a presentation on each day, covering metadata description as well as reuse and discovery.

Ten of the Indian institutions presented five-minute lightning talks covering a diverse range of initiatives and describing their archival collections. The Ashoka Archives of Contemporary India presented their collection, which includes the Mahatma Ghandi papers as well as material from other Indian politicians and academics. The Keystone Foundation gave an overview of the opportunities and challenges around their work with indigenous communities in India. Their aim is to challenge traditional portrayals of indigenous culture by employing oral history interviews, which give a voice to parts of the culture that would otherwise remain unheard. The French Institute of Pondicherry featured material that had been digitised for several Endangered Archives Programme (EAP) projects, including ceiling murals and glass frames. The participants from FLAME University presented a project of digitising Indian cookbooks, showing the interdependencies between caste and cooking. The multimedia resource Sahapedia (https://www.sahapedia.org/) was presented as a way of curating Indian heritage in an online environment. All participants were looking for ways to make cultural heritage more accessible using digital tools. On the afternoon of the second day, the participants had an opportunity to undertake a hands-on activity testing OCR tools using their own material.

The workshop was well received and feedback was overall positive. The participants voiced interest in receiving more in-depth practical training and how-to guides around cataloguing and metadata capture, setting up systems as well as preservation and conservation. 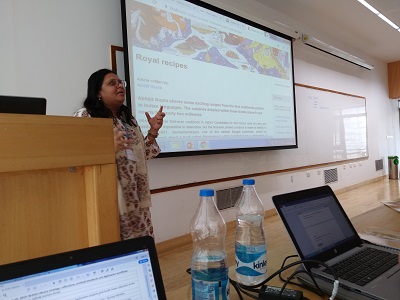 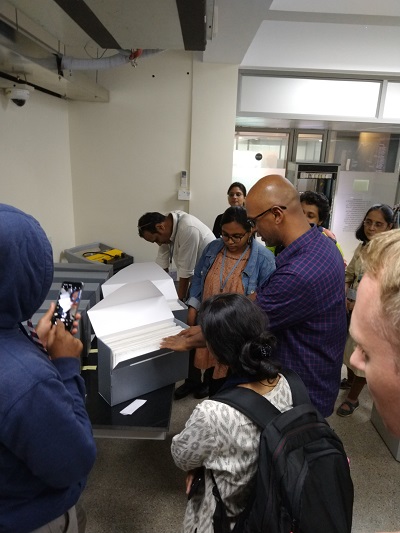 On the left: MayaDodd from FLAME University presents the Indian recipes project. On the right: Venkat giving a tour of the NCBS archive

On the evening of the first day, Venkat gave us a tour of the NCBS archives, which he had built up from scratch, working with NCBS researchers and with the help of student volunteers. The archive was remarkably open, inviting in students and staff even if they did not have an explicit research interest. Venkat was very interested in maintaining it as an open space. His archive is accompanied by an open and evolving exhibition space, which students can contribute to.

Setting up archives in India is not an easy undertaking, and Venkat has put in a tremendous effort to make it work. Even the essentials can be difficult to come by, since there is no supplier for archival materials in India for example, and Venkat had to import all his acid-free boxes from Germany.

On my last day, I accompanied Tom on a visit to the Karnataka State Central Library. The Director of the Department of Public Libraries, Dr. Satish Kumar Hosamani was not present, but his team kindly offered to give us a tour of the library. The Librarian showed us the round reading room and newspaper reading room and the collection of rare books and manuscripts. The State Library is planning to digitise these in the near future. This activity is currently awaiting approval and funding from the Karnataka state government. 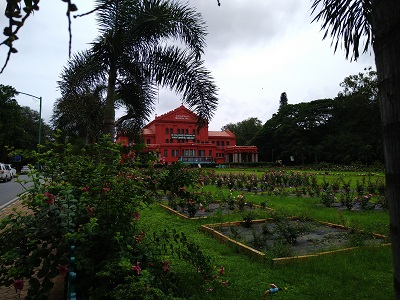 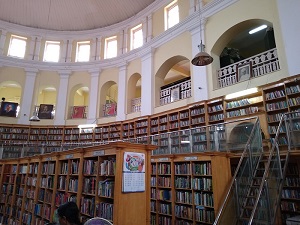 Trying to find our way to the library, we discovered the existence of a “British Library Road” in Bangalore but were unable to reach it due to the customary extremely heavy traffic in Bangalore. Getting to and from destinations usually took a long time. The best way to get around over short distances was by “Tuk-tuk”, the ever-present means of transport in Indian cities. 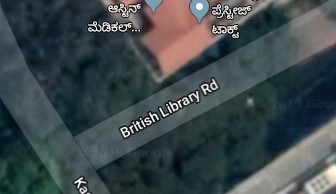 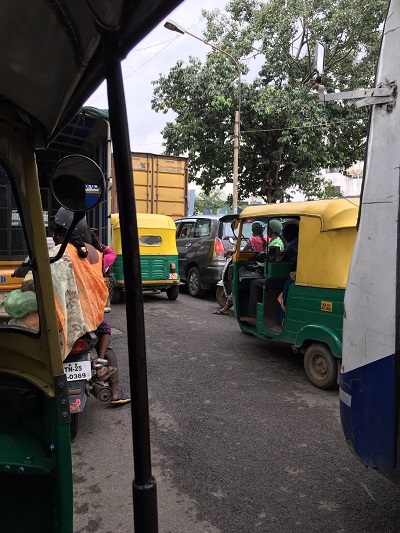 On the left: British Library Road in Bangalore. On the right: view from a Tuk-Tuk - the traffic in Bangalore was eternally gridlocked!