On October 16th 2019, the BL/QFP Project opened its doors to its third and biggest Hack Day to date. After the success of the first two, it was decided to extend participation beyond the Imaging Team and invite everyone from the rest of the project to get involved. We wanted to utilise the unique way the BL/QFP is set up within the Library, with different teams and specialities all working in one place, and emphasise collaboration across these different teams. The diverse people and teams within the BL/QFP bring a wide variety of skills and experience, from language and collections knowledge to artistic and technicial expertise. By bringing these together, we were able to learn from and teach each other whilst engaging with the collections and producing a variety of fascinating and thought-provoking hacks.

During the launch workshop the vast array of skills and expertise within the team were evident, as well as the abundant enthusiasm and ambition people had. After the proposed projects were raised and discussed, five teams were formed focusing on a wide range of ideas. On the day, almost half of the BL/QFP staff participated in some way, proving the collaboration objective was well and truly met. The diverse outputs, from animations and games to pinhole cameras and data visualisations, were presented at a “show and tell”, and some were displayed on the BL/QFP Twitter page.

Below is a summary of the day, including descriptions of the hacks from each of the five teams, enjoy!

For our Hack Day project, we wanted to make the Qatar Digital Library (QDL) more accessible to non-experts, or people who might not be looking at it with a specific research aim. With this in mind, we decided to develop some quick and easy games to engage users with the collections. Using free browser-based software, we created a word search, jigsaw puzzles, crosswords, and a game of hangman. These all drew on the collections which were already digitised. Where possible, we tried to include links to the items on the QDL. Although the free software had some limitations, we feel that these games offer a foundation to build on in the future.

Our Hack Day project centred on what the Library's Imaging Services can do with the technology and expertise they offer, in particular photogrammetry. Photogrammetry is a photographic process where any type of object can be rendered into a 3D image for display on a 2D screen. This process is beneficial as it displays the complete item, allowing users to see and understand collection items without having to handle them.

We chose an Astrolabe Quadrant from the collection and created a rendition but also an animation of the same object. As you can see from both renditions, they have certain advantages over a single photograph of a 3D object, bringing the object to life. 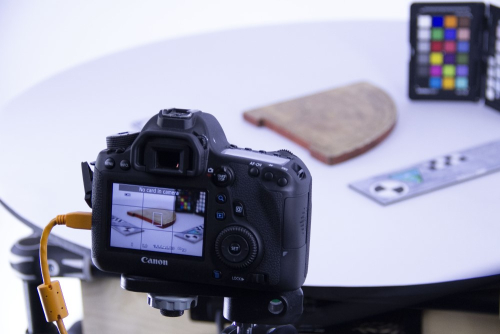 Our team explored early types of photography. First off, we created a camera obscura in one of the bays in our Imaging Studio by blocking out the light and creating a small hole by the window. An optical phenomenon, this simple hack allowed us to create an upside-down projection of the London skyline, complete with moving clouds and the Shard. Viewing sessions were arranged throughout the day and resulted in a stream of curious visitors.

As well as the camera obscura, we each built our own pinhole cameras using card, stripy tape and light-sensitive paper. Once we can set up a temporary darkroom we plan to take and develop photographs illustrating different aspects of the BL/QFP Project. Lastly, an experiment using cyanotype paper in an old brownie camera is still in progress, taking a long exposure still-life of a spirit level borrowed from the Conservation Team. 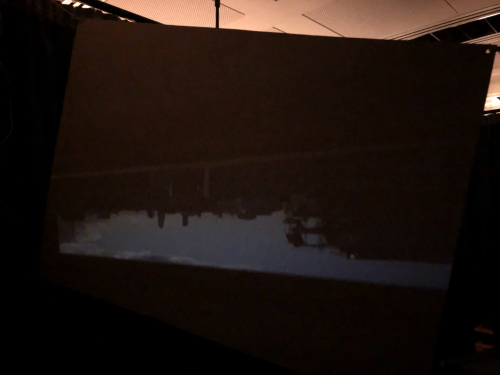 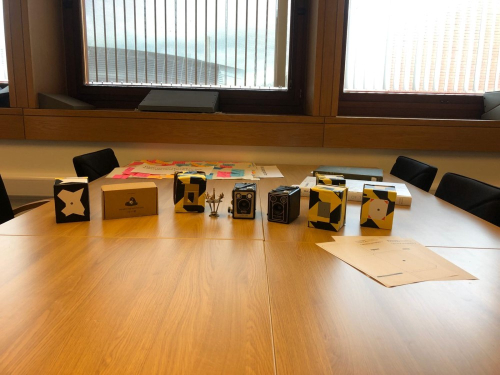 Behind The Scenes: Visualisations

Our Hack Day project aimed to illuminate some aspects of our digitisation workflow that are not directly represented in the material displayed on the QDL. We wanted to represent and celebrate some of the hard work that goes into the creation of digitised material, particularly the tasks and processes that most people wouldn’t necessarily think about. The 45+ people involved in our workflow have a huge variety of skills and expertise, and it was some of this that we wanted to capture. We decided to use ‘every day’ objects from our workflow and picture them in interesting ways. Then pick out some interesting facts and figures about the processes they represent. Using Photoshop these two were combined to present the facts in their ‘every-day’ setting. QDL Homepage combined with a picture of the BL/QFP Team 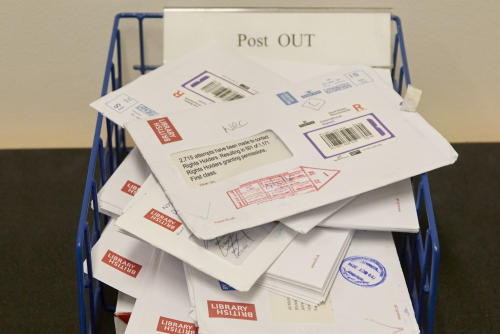 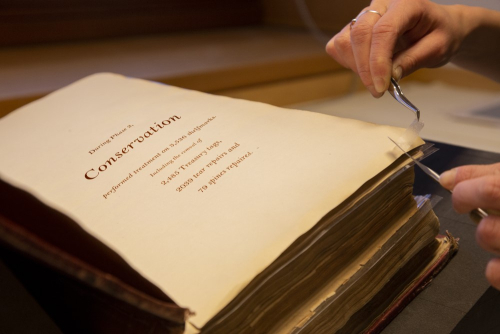 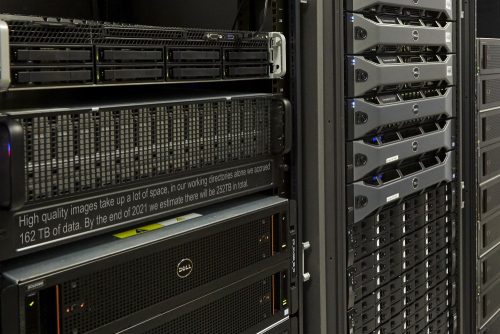 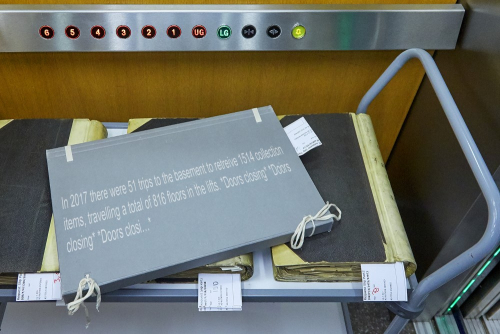 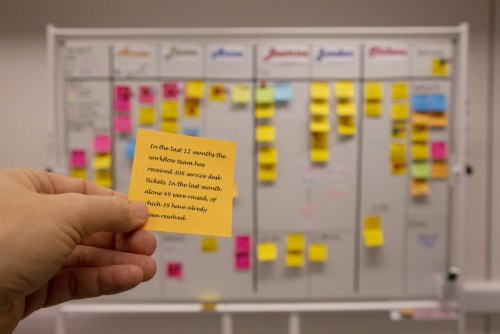 The Workflow Team’s Kanban Board 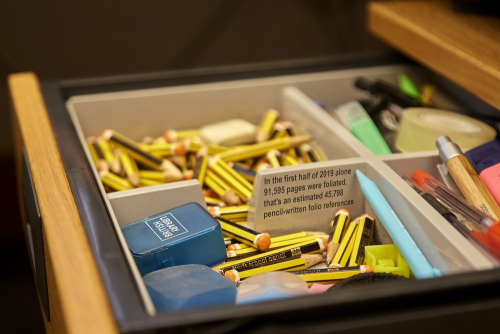 We had the idea to display data about the Project in visually dynamic and appealing ways. We thought we could experiment with displaying authority terms used in the Project’s catalogue records and see what we could learn about data manipulation and data visualisation along the way.

Whilst we were able to export data about the Project and collections from SharePoint (the platform we use to manage items through the digitisation workflow) and IAMS (the Library's cataloguing system for archives, manuscripts, photographs and other visual materials), we needed to tidy up the data to make it useful. For example, the IAMS data is exported as code in an XML file format so Sotirios experimented with extracting particular elements. This work highlighted how data visualisations rely on having well-organised and complete data.

Using Microsoft Power BI, we tried a variety of ways for displaying the data, including network and force-directed graphs. These graphs show relationships between data points, such as the authority terms assigned to different shelfmarks. We also created other visualisations, such as pie charts, that quantified specific aspects of the data, for example showing the numbers of person authorities according to gender, or the language of their name. The challenge being to create something visually appealing but still meaningful.

Working in collaboration with the Library’s BAME Staff Network, we wanted to investigate people’s perceptions of weaponry displayed in our offices. We prepared a survey and sent it out to the BL/QFP Project staff, asking them to fill it in. A work in progress, the results, quotes and related imagery will be collated into a zine illustrating the survey responses to the weapons. We will be using original photographs, images from the QDL and public domain images found on Flickr, including from the British Library’s Flickr account. With this, we hope to start a conversation about what the weaponry can represent to different people and why this is important to keep in mind. 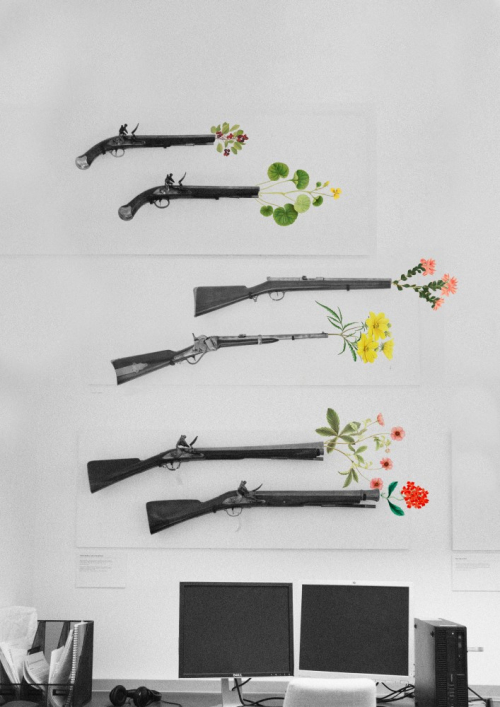 If you would like to explore the photographs and documents used in our Hack Day projects from the Qatar Digital Library or find out more about the India Office Records please follow the links below:

The BL/QFP Project’s Imaging Team won the Staff Award at the British Library Labs Symposium 2019 for their Hack Days.