Do you want to see my butterfly collection? 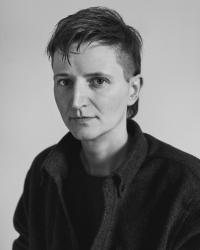 Sara Lucas Agutoli lives and works between London and Bologna.  Her academic research focuses on the concepts of true and false in art, in particular in photography. In her art S. L. Agutoli merges popular themes with a learned and symbolic system of citations. Working with different media, she reflects on the idea of ongoing transformation – of the spaces, of the body, as well as of aesthetics – and creates personal architectures drawing on her inner experiences, knowledge and visions.

When occupied with my full time job, I often spend the time wandering on the net, looking for pictures that trigger my interest, either because they are odd and curious or aesthetically pleasant and elegant.

Since 2011 I’ve enjoyed calling myself a cyber-flâneur1:. unlike the Parisian strollers described by Baudelaire, I walked through cyber avenues, getting lost amid different digital archives. I glimpsed through collections of images instead of windows, stared at close-ups of manuscripts instead of sunsets on rivers. The net was my city and I just followed my nose walking through it. I wanted to make my curiosity an aesthetic operation. In doing so I’ve come to believe that online archives are my personal church of Saint-Julien-le-Puvre, the chosen venue for my cyber-dadaist performances,
see: https://www.moma.org/collection/works/184056

For years my working activity followed a pattern: a few months of research – during which I spend hours and hours on Flickr Commons browsing online archives of museums and institutions saving selected images on my hard disk–, followed by months in the studio working creatively with the pictures accumulated.

I did accumulate images and emotions, from advertising to family album pictures. I wanted to explore how photography was used in different parts of the world, eras and in different economical contexts.

In 2011, while in Montreal for my first art residence, I analysed the different uses of vernacular photography in the 50s in North America and Italy. To do so, I used the open archives of most of the North American Libraries (New York Public library, Congregation of Sister of St. Joseph in Canada, California Historical Society and many others) and a private physical archive located in a tin box in my grandmother house.

This lead to a series of pictures inspired by this contrast. The series was exhibited in a solo show called Fermez les yeux. 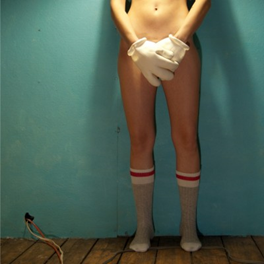 The vastness and the richness of topics of the images I accumulated triggered constantly my creativity and my sense of humour. They often made me ask myself  “why do those pictures exist”?

The images – especially those more vernacular, random and unforeseen – became the objects trouvés I could rework using my imagination and reality.

During this dadaist-inspired net-surfing, the most fertile encounter of the last years has been the one with the collections of two of the major London institutions: the British Library and the Wellcome Collection digital archives.

I was about to move from Italy to London and so my artistic research was about to change, inspired by this encounter.

I started to become interested in the aesthetics of the Victorian era and in the concept of the museum as an extension of a wunderkammer.

I started collecting  images of naturalia 2 and decided to transform them into artificialia in my studio.  And so I did, merging and morphing creatively these images. In 2013 I produced a digital collage of a butterfly scientific illustration and a medical vulva lithography and it was exhibited in public space in Bologna during CHEAP poster Festival. 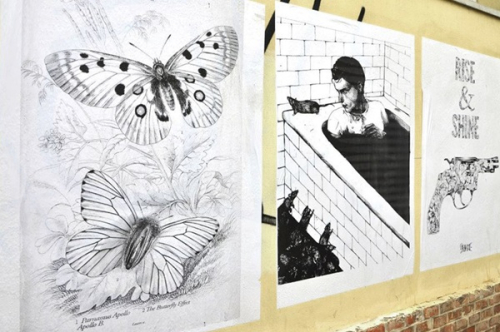 Posters as part of the CHEAP poster festival

This collage of images from the British Library and the Wellcome Collection became the first piece of the larger project Il muro delle meraviglie – the wall of wonders – for which I chose to use the wall of my living room in my home/atelier in NW London.

Il muro delle meraviglie started like a joke to mock the colonialist aesthetic of Victorian museum collections and it became a work of art. Among the wonders I added subsequently, you can find that first collage of the butterfly and the vulva, which I decided to call  “Do you want to see my butterfly collection?” to make my queer/ feminist perspective encounter the delicacy of the naturalistic illustration of butterfly.

The title, in Italian, refers to an apparently naïve question which has an explicit sexual allusion.

The person who asks “come see my butterflies’ collection” might be suggesting it to obtain something more, as the butterfly is used as a metaphor for the female sex. 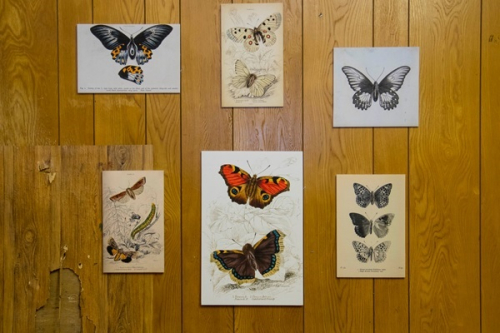 This work criticises the male chauvinist obsession for cataloguing, intended as an activity aimed more at showing off, than simply showing.

It represents a feminist critique and re-appropriation of such images.

Here the butterflies become proper “c*nts” and give visibility to the female genitalia.

It has been exhibited for the first time in 2013 on the streets of Bologna (IT) during CHEAP festival and at Queer demonstration thanks to C*ntemporary.

If I didn’t have access to the BL and the Wellcome digital archives, all of this wouldn’t have been possible.

Finally, I would like to thank the support I have received from BL Labs and am excited about the new experiments and projects waiting for me around the corner.