My research, writing and broader critical practice are inextricably linked. For example, the short story “Ghillie’s Mum”, recently nominated for the BBC Short Story Award, was an exploration of fraught parent / child relationships, which fed into my interactive novella Writers Are Not Strangers, which was in turn the culmination of research into the way readers and players respond to writers and creators both directly and indirectly.

“The Memory Archivist” BL Labs Artistic award winner 2019, offers a similar blending of creative work, research and reflection. The basis for the project was the creation of a collection of works of interactive fiction for the UK Web Archive (UKWA) as part of an investigation into whether it was possible to capture interactive works with existing web archiving tools. The project used WebRecorder and Web ACT to add almost 200 items to the UKWA. An analysis of these items was then undertaken, which indicated various recurring themes, tools and techniques used across the works. These were then incorporated into “The Memory Archivist” in various ways. Opening screen for the Memory Archivist

The interactive fiction tool Twine was the most widely used by UK creators across the creative works, and was therefore used to create “The Memory Archivist”. Key themes such as pets, public transport and ghosts were used as the basis for the memories the player character may record. Elements of the experience of, and challenges relating to, capturing interactive works (and archival objects more generally) were also incorporated into the narrative and interactivity. When the player-character attempts to replay some of the memories they have recorded, they will find them captured only partially, or with changes to their appearance.

There were other, more direct, ways in which the Library’s digital content was included too, in the form of  repurposing code. ‘Link select’ functionality was adapted from Jonathan Laury’s Ostrich and CSS style sheets from Brevity Quest by Chris Longhurst were edited to give certain sections their distinctive look. An image from the Library’s Flickr collection was used as the central motif for the piece not only because it comes from an online digital archive, but because it is itself a motif from an archive – a French 19th Century genealogical record. Sepia tones were used for the colour palette to reflect the nostalgic nature of the piece. 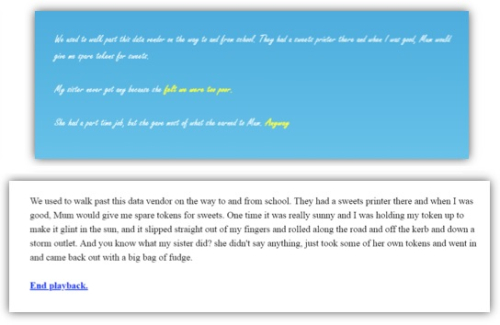 Together, these elements aim to emphasise the fact that archives are a way to connect memories, people and experiences across time and space and in spite of technological challenges, while also acknowledging that they can only ever be partial and decontextualised.

The research into web archiving was presented at the International Internet Preservation Consortium in Zagreb and the Digital Preservation Coalition’s Web Archiving & Preservation Working Group event in Edinburgh.

Other blog posts from Lynda's related work are available here: