Posted on behalf of Lesley Phillips, a former Derbyshire local studies librarian in the UK and BL Labs Community Commendation Award winner for 2019 by Mahendra Mahey, Manager of BL Labs.

Lesley explains how the British Library's digital collections of playbills and digtised newspapers enabled her to compile a detailed account of the career of the actor-manager John Faucit Saville in the East Midlands 1843-1855.

John Faucit Saville was born in Norwich in 1807, the son of two actors then performing with the Norwich Company as Mr and Mrs Faucit. His parents separated when he was 14 years old and just entering on his stage career. His mother, then a leading actress at Drury Lane, moved in with the celebrated actor William Farren, and continued to perform as Mrs Faucit, while his father became a manager and changed his surname to Saville (his real name).

On the evening that the fatal news [of his wife's desertion] reached him [Mr John Faucit] left the theatre and walked over the beach. His lips trembled and he was severely agitated. Many persons addressed him, but he broke from them and went to the house of a particular friend. The facts were then known only to himself. Though a man of temperate habits, he drank upwards of two bottles of wine without being visibly affected. He paced the room and seemed unconscious of the presence of anyone. To his friend's inquiries he made no reply. He once said “My heart is almost broke, but you will soon know why”.

Despite the rift between his parents, John Faucit Saville had all the advantages that famous friends and relatives could bring in the theatrical world, but during his time as an aspiring actor it soon became clear that he would never be a great star. In 1841 he began to put his energies into becoming a manager, like his father before him. He took a lease of Brighton Theatre in his wife's home town, but struggled to make a success of it.

Like the other managers of his day he was faced with a decline in the fashion for rational amusements and the rise of 'beer and circuses'. This did not deter him from making a further attempt at establishing a theatrical circuit. For this he came to the East Midlands and South Yorkshire, where the decline of the old circuit and the retirement of Thomas Manly had laid the field bare for a new man. Saville must surely have had great confidence in his own ability to be successful here, given that the old, experienced manager had begun to struggle.

Saville took on the ailing circuit, and soon discovered that he was forced to make compromises. He was careful to please the local authorities as to the respectability of his productions, and yet managed to provide more lowbrow entertainments to bring in the audiences. Even so, after a few years he was forced to reign in his ambitions and eventually reduce his circuit, and he even went back on tour as an itinerant actor from time to time to supplement his income. Saville's career had significant implications for the survival of some of the theatres of the East Midlands, as he lived through the final disintegration of the circuit.

Over the years, John Faucit Saville's acting career had taken him to Paris, Edinburgh, and Dublin, as well as many parts of England. Without the use of digital online resources it would be almost impossible to trace a career such as his, to explore his background, and bring together the details of his life and work. 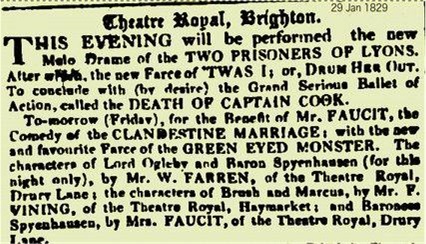 The digitised newspapers of the British Newspaper Archive https://www.britishnewspaperarchive.co.uk enabled me to uncover the Saville family origins in Bedford, and to follow John Faucit Saville's career from the heights of the London stage, to management at Brighton and then to the Midlands. 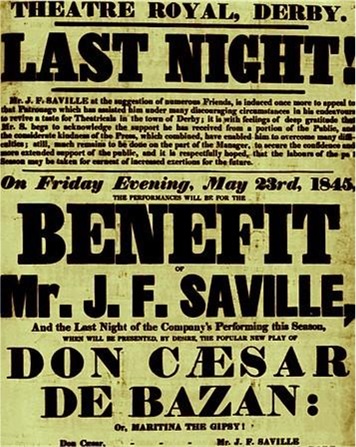 The dataset of playbills available to download from the British Library web site https://data.bl.uk/playbills/pb1.html enabled me to build up a detailed picture of Saville's work, the performers and plays he used, and the way he used them. It was still necessary to visit some libraries and archives for additional information, but I could never have put together such a rich collection of information without these digital resources.

My research has been put into a self-published book, filled with newspaper reviews of Saville's productions, and stories about his company. This is not just a narrow look at regional theatre; there are also some references to figures of national importance in theatre history. John Faucit Saville's sister, Helen Faucit, was a great star of her day, and his half-brother Henry Farren made his stage debut in Derbyshire with Saville's company. John Faucit Saville's wife Marianne performed with Macready on his farewell tour and also played at Windsor for Queen Victoria. The main interest for me, however, was the way theatre history reveals how national and local events impacted on society and public behaviour, and how the theatre connected with the life of the ordinary working man and woman. 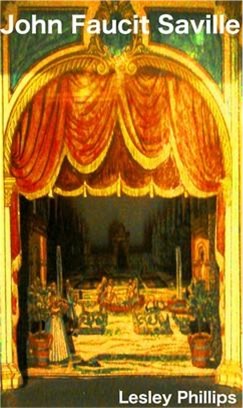 Front cover of my self-published book about John Faucit Saville

If you are interested in playbills generally, you might want to help British Library provide more information about individual ones through a crowdsourcing project, entitled 'In the Spotlight'.