How to make art when we’re working apart

Like many at the British Library, the last couple of months has seen my role as a Senior Imaging Support Officer drastically change. While working from home, it has been impossible for me to carry on my normal digitisation work. Despite this, the time spent at home has reminded me why the work I do can be so important. Digitised collections have become essential during this time in allowing institutions to carry on engaging with the public at a time when their doors are closed. The potential and opportunity accessing heritage collections from the comfort of your own home can bring is being highlighted every day.

Research and academic use of online collections is recognised. However, the vast creative potential is still not always identified by users and institutions. This is something I have been interested in for a long time and I am always keen to produce work that changes people’s perceptions of how people can use online collections. The Hack Days I have taken part in over the last couple of years at the British Library have given me a chance to explore this, producing creative responses to the Qatar Digital Library. Whether through zine making, print making or colourisation, I have been able to produce this work thanks to the digitised material made available for free.

The format and layout of websites designed to showcase digitised collections is normally more geared towards researchers and academics. When using online collections creatively, I want to work with a website that is image focused rather than text based. As a result, I have found institution’s uploading to Flickr to be the easiest to use. The Library of Congress, The National Archives and The National Archives of Estonia are just some of the accounts I have used in the past. This meant that when I found myself working from home, one of the first things I wanted to do was work with the British Library’s Flickr account. With over a million images uploaded in 2013, there are some incredible images to use and I have long recognised its potential for use in creative projects. All of these images have been uploaded without copyright restrictions so that they can be used by anyone for free. Yes - including commercially! The images are taken from the pages of 17th, 18th and 19th century books. Digitised by Microsoft, they gifted the scanned images to the British Library allowing them to be released into the Public Domain.You can read more about this collection here.

It’s also important to note this certainly isn’t the first time the British Library Flickr images have been used creatively. Among others, artists like David Normal, Michael Takeo Magruder, Mario Klingemann and Jiayi Chong have all produced very different work using the book illustrations from this collection.

I knew I wanted to produce a series of collages but without access to a printer I was unable to print any of the images out. However, downloading the images allowed me to begin making digital collages. I used both Microsoft Word and Adobe Photoshop to create them. The collages I produced were in a similar vein to some of the images and artwork included in zines I have made in the past. These were normally made to illustrate a piece of text or data. However, this time I wanted to do something purely for fun, bringing random images together with lots of colour to create weird and wonderful images.

I began scrolling through the photo stream, collecting images into a folder on my computer. I enjoyed the serendipitous nature the Flickr interface brings and there were so many images I found just by chance rather than by using the search bar. There are also useful albums under different themes, including cats and cycling, which helped during my initial search. You can see some of the collages I created below. 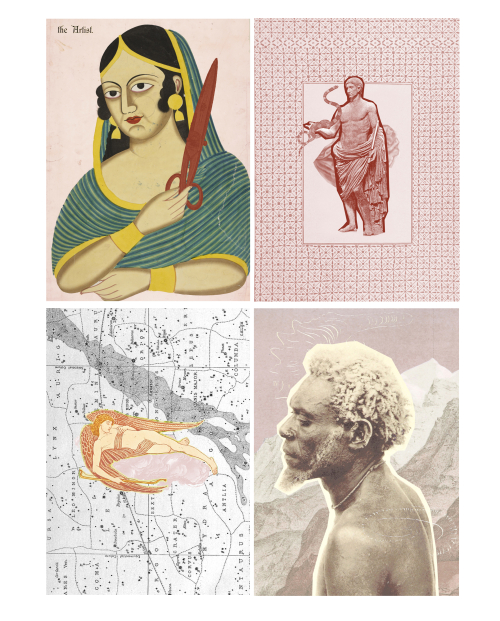 As I was creating them, I realised that not only were they enjoyable to make, the process was giving me something to put my mind to. It took me away from the stress and the uncertainty of everything going on around me and once again proved the benefits creativity has on mental health. Studies have shown that getting creative can have a similar affect to meditating. It helps you to relax, lifts your mood and allows you to express yourself in ways you wouldn’t normally. Additionally, there’s no wrong or right when making art. It can be a bit of freedom without any pressure or stress - something so many of us need right now.

Having realised and experienced the benefits of this myself, I began putting together a guide on how to make collages using images from the British Library Flickr page. ‘How to make art when we’re working apart’ contains simple instructions on how to produce a collage, both digital and physical. If you don’t have access to printer, the guide focuses on using Microsoft Word to produce a digital collage. I am also currently producing a second guide for anyone interested in gaining a basic understanding of how to use Adobe Photoshop. Included is a list of artists who use collage in their work, along with a simple ‘formula’ of how to make a collage for those who are feeling a bit stuck. The guide is for anyone interested in creating a bit of art while stuck indoors. Even if you’re not creatively minded, it’s easy to use and ideal for anyone looking to give themselves a small distraction from the situation we all find ourselves in. 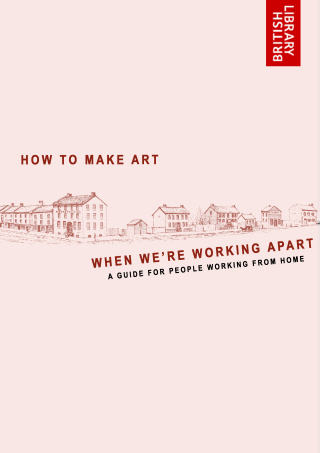