Making Watermarks Visible: A Collaborative Project between Conservation and Imaging

Some of the earliest documents being digitised by the British Library Qatar Foundation Partnership are a series of ship’s journals dating from 1605 - 1705, relating to the East India Company’s voyages. Whilst working with these documents, conservators Heather Murphy and Camille Dekeyser-Thuet noticed within the papers a series of interesting examples of early watermark design. Curious about the potential information these could give regarding the journals, Camille and Heather began undertaking research, hoping to learn more about the date and provenance of the papers, trade and production patterns involved in the paper industry of the time, and the practice of watermarking paper. There is a wealth of valuable and interesting information to be gained from the study of watermarks, especially within a project such as the BLQFP which provides the opportunity for study within both IOR and Arabic manuscript material. We hope to publish more information relating to this online with the Qatar Digital Library in the form of Expert articles and visual content.

The first step within this project involved tracing the watermark designs with the help of a light sheet in order to begin gathering a collection of images to form the basis of further research. It was clear that in order to make the best possible use of the visual information contained within these watermarks, they would need to be imaged in a way which would make them available to audiences in both a visually appealing and academically beneficial form, beyond the capabilities of simply hand tracing the designs.

Hand tracings of the watermark designs

This began a collaboration with two members of the BLQFP imaging team, Senior Imaging Technician Jordi Clopes-Masjuan and Senior Imaging Support Technician Matt Lee, who, together with Heather and Camille, were able to devise and facilitate a method of imaging and subsequent editing which enabled new access to the designs. The next step involved the construction of a bespoke support made from Vivak (commonly used for exhibition mounts and stands). This inert plastic is both pliable and transparent, which allowed the simultaneous backlighting and support of the journal pages required to successfully capture the watermarks. 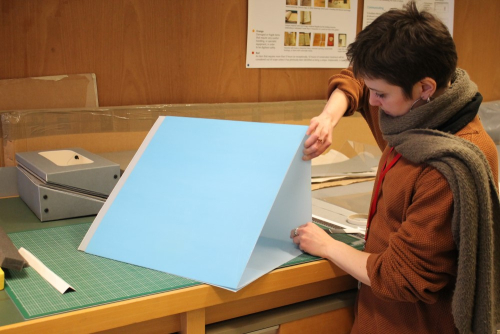 Creation of the Vivak support 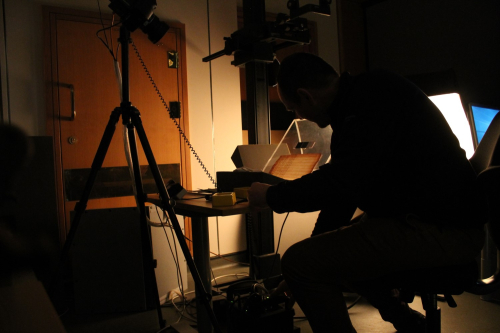 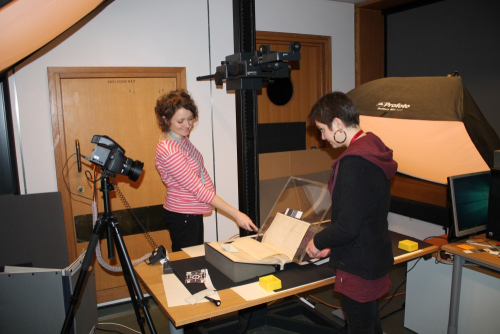 Studio setup for capturing the watermarks

Before capturing, Jordi suggested we create two comparison images of the watermarks. This involved capturing the watermarks as they normally appear on the digitised image (almost or completely invisible), and how they appear illuminated when the page is backlit. The theory behind this was quite simple: “to obtain two consecutive images from the same folio, in the exact same position, but using a specific light set-up for each image”.

By doing so, the idea was for the first image to appear in the same way as the standard, searchable images on the QDL portal. To create these standard image captures, the studio lights were placed near the camera with incident light towards the document.

The second image was taken immediately after, but this time only backlight was used (light behind the document). In using these two different lighting techniques, the first image allowed us to see the content of the document, but the second image revealed the texture and character of the paper, including conservation marks, possible corrections to the writing, as well as the watermarks.

One unexpected occurrence during imaging was, due to the varying texture and thickness of the papers, the power of the backlight had to be re-adjusted for each watermark. 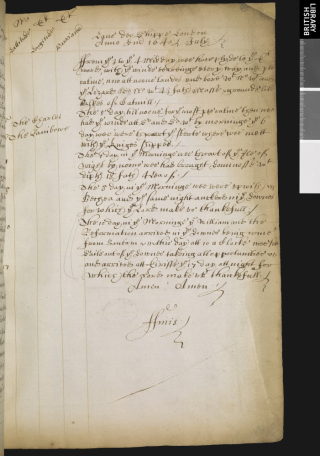 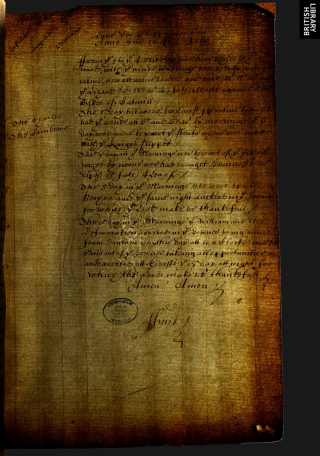 Previous to our adopted approach, other imaging techniques were also investigated:

Once we had successfully captured the images, Photoshop proved vital in allowing us to increase the contrast of the watermark and make it more visible. Because every image captured was different, the approach to edit the images was also different. This required varying adjustments of levels, curves, saturation or brightness, and combining these with different fusion modes to attain the best result. In the end, the tools used were not as important as the final image. The last stage within Photoshop was for both images of the same folio to be cropped and exported with the exact same settings, allowing the comparative images to match as precisely as possible.

The next step involved creating a digital line drawing of each watermark. Matt Lee, a Senior Imaging Support Technician, imported the high-resolution image captures onto an iPad and used the Procreate drawing app to trace the watermarks with a stylus pen. To develop an approach that provided accurate and consistent results, Matt first tested brushes and experimented with line qualities and thicknesses. Selecting the Dry Ink brush, he traced the light outlines of each watermark on a separate transparent layer. The tracings were initially drawn in white to highlight the designs on paper and these were later inverted to create black line drawings that were edited and refined.

Tracing the watermarks directly from the screen of an iPad provided a level of accuracy and efficiency that would be difficult to achieve on a computer with a graphics tablet, trackpad or computer mouse. There were several challenges in tracing the watermarks from the image captures. For example, the technique employed by Jordi was very effective in highlighting the watermarks, but it also made the laid and chain lines in the paper more prominent and these would merge or overlap with the light outline of the design.

Some of the watermarks also appeared distorted, incomplete or had handwritten text on the paper which obscured the details of the design. It was important that the tracings were accurate and some gaps had to be left. However, through the drawing process, the eye began to pick out more detail and the most exciting moment was when a vague outline of a horse revealed itself to be a unicorn with inset lettering. 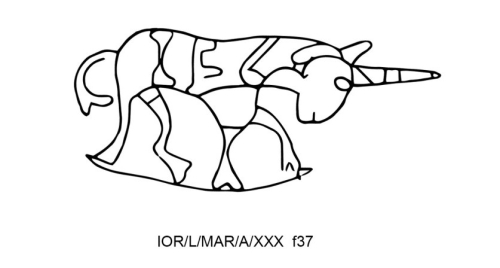 In total 78 drawings of varying complexity and design were made for this project. To preserve the transparent backgrounds of the drawings, they were exported first as PNG files. These were then imported into Adobe Illustrator and converted to vector drawings that can be viewed at a larger size without loss of image quality. 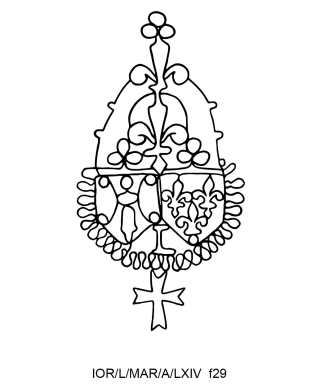 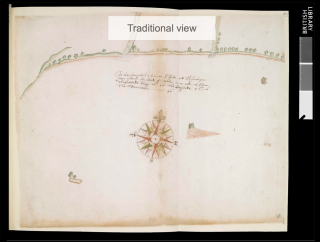 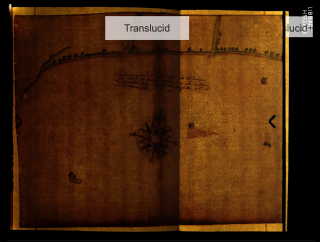 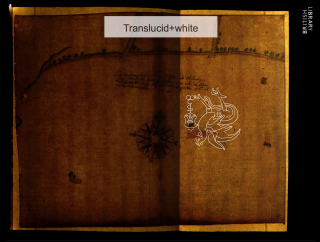 Jordi was able to take these images and, by using a multiple slider tool, was able to display them on an offline website. This enabled us to demonstrate this tool to our team and present the watermarks in the way we had been wishing from the beginning, allowing people to both study and appreciate the designs.

Posted by Digital Research Team at 7:28 AM