Supervised jointly by Stella Wisdom from the British Library, Roger Sabin and Ian Hague from UAL, my research looks to explore the potential for digital comics to take advantage of digital technologies and the digital environment to foster inclusivity and diversity. I aim to examine the status of marginal voices within UK digital comics, while addressing the opportunities and challenges these comics present for the British Library’s collection and preservation policies. 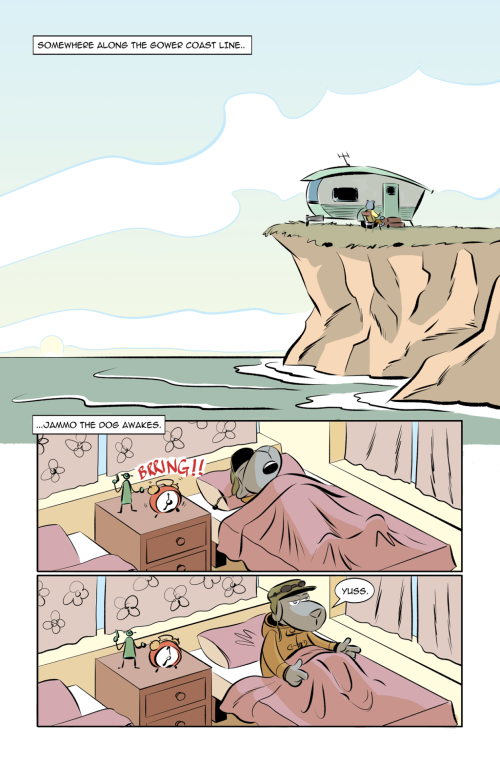 The opening panels from G Bear and Jammo by Jaime Huxtable, showing their caravan on The Gower Peninsula in South Wales, copyright © Jaime Huxtable

Digital comics have been identified as complex digital publications, meaning this research project is connected to the work of the broader Emerging Formats Project. On top of embracing technological change, digital comics have the potential to reflect, embrace and contribute to social and cultural change in the UK. Digital comics not only present new ways of telling stories, but whose story is told.

One of the comic creators, whose work I have been recently examining is Jaime Huxtable, a Welsh cartoonist/illustrator based in Worthing, West Sussex. He has worked on a variety of digital comics projects, from webcomics to interactive comics, and also runs various comics related workshops.

Samir's Christmas by Jaime Huxtable, this promotional comic strip was created for Freedom From Torture’s 2019 Christmas Care Box Appeal. This comic was  made into a short animated video by Hands Up, copyright © Jaime Huxtable

My thesis will explore whether the ways UK digital comics are published and consumed means that they can foreground marginal, alternative voices similar to the way underground comix and zine culture has. Comics scholarship has focused on the technological aspects of digital comics, meaning their potentially significant contribution reflecting and embracing social and cultural change in the UK has not been explored. I want to establish whether the fact digital comics can circumvent traditional gatekeepers means they provide space to foreground marginal voices. I will also explore the challenges and opportunities digital comics might present for legal deposit collection development policy.

As well as being a member of the Comics Research Hub (CoRH) at UAL, I have already begun working with colleagues from the UK Web Archive, and hope to be able to make a significant contribution to the Web Comic Archive. Issues around collection development and management are central to my research, I feel very fortunate to be based at the British Library, to have the chance to learn from and hopefully contribute to practice here.

If anyone would like to know more about my research, or recommend any digital comics for me to look at, please do contact me at Tom.Gebhart@bl.uk or @thmsgbhrt on Twitter. UK digital comic creators and publishers can use the ComicHaus app to send their digital comics directly to The British Library digital archive. More details about this process are here.

Posted by Digital Research Team at 9:56 AM