Ira Aldridge In the Spotlight

In this post, Dr Mia Ridge gives a sense of why sightings of Ira Aldridge in our historical playbills collection resonate...

Ira Aldridge is one of the most popular 'celebrity spottings' shared by volunteers working with historical playbills on our In the Spotlight project. Born on this day in New York in 1807, Aldridge was the first Black actor to play a Shakespearean role in Britain. 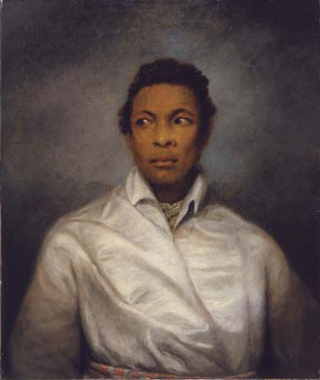 Portrait of Aldridge by James Northcote

Educated at the African Free School and with some experience at the African Grove Theatre in New York, the teenaged Aldridge emigrated to Britain from the US in 1824 and quickly had an impact. In 1826 painter James Northcote captured him as Othello, a portrait which became the first acquisition by the Manchester Art Gallery. (If you're reading this before August 15th, you can attend an online tour exploring his work.)

While his initial reviews were mixed, he took The Times' mocking reference to him as the 'African Roscius' and used both the references to the famous Roman actor and his African ancestry in promotional playbills. Caught up in debates about the abolition of slavery and facing racism in reviews from critics about his performances in London's theatres, Aldridge toured the regions, particularly British cities with anti-slavery sympathies. He performed a range of roles, and his Shakespearean roles eventually including Othello, Shylock, Macbeth, King Lear and Richard III.

From 1852, he toured Europe, particularly Germany, Poland and Russia. This 'List showing the theatres and plays in various European cities where Ira Aldridge, the African Roscius, acted during the years 1827-1867, compiled by Arturo Alfonso Schomburg, shows how widely he travelled and the roles he performed.

As the 1841 playbill from Doncaster's Theatre Royal (below) shows, the tale of his African ancestry grew more creative over time. The playbill also advertises a lecture and memoirs from Aldridge on various topics. In the years around the abolition of slavery in the British Empire, he spoke powerfully and directly to audiences about the injustices of slavery and racism. Playbills like this demonstrate how Aldridge managed to both pander to and play with perceptions of 'the African'.

This is necessarily a very brief overview of Aldridge's life and impact but I hope it's given you a sense of why it's so exciting to catch a glimpse of Aldridge in our collections. 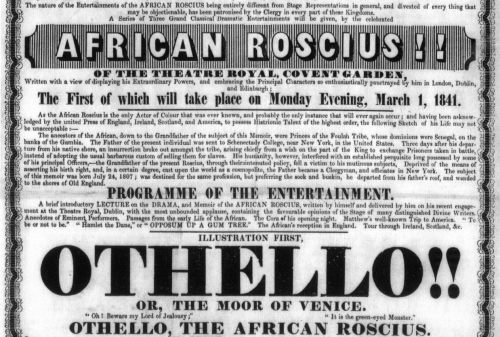 Sources used and further reading include:

My thanks to everyone who suggested references for this post, in particular: Christian Algar, Naomi Billingsley, Nora McGregor, Susan Reed from the British Library; Dorothy Berry from the Houghton Library at Harvard and In the Spotlight participants including beccabooks10, Nosnibor3, Elizabeth Danskin (who shared a link to this video about his daughter, Amanda Aldridge), Nicola Hayes, and Sylvia Morris (who has written extensively about Aldridge on her blog).