Not Just for Kids: UK Digital Comics, from creation to consumption

This is a guest post by Linda Berube, an AHRC Collaborative Doctoral Partnership student based at the British Library and City, University of London. If you would like to know more about Linda's research, please do email her at Linda.Berube@city.ac.uk.

“There are those who claim that Britain no longer has a comics industry.” (John Freeman, downthetubes.net, quoting Lewis Stringer)

Freeman goes onto say that despite the evidence supporting such a view (have you ever really looked at a WH Smith comics rack? He has: see his photo of one here), the British comics industry is not just all licenced content from the United States, and it has continued to produce new publications. Maybe the newsstand is not necessarily the best place to look for them.
For the newsstand does not tell the whole story. Comics are not all kiddie and superhero characters now, if they ever were (Sabin 1993). Not that there is anything wrong with that content, but prevailing attitudes about the perceived lack of seriousness of these types of comics can inhibit a consideration of comics as cultural objects in their own right, worthy of research. Novelist Susan Hill (2017) expresses a widely held view when she stated: "Is it better for young people to read nothing at all than read graphic novels-which are really only comics for an older age group?". No amount of book awards, academic departments or academic journals have eliminated such sentiments[1].

The best place for looking at all UK comics have to offer is online. Digital comics have not only brought a whole new audience but new creators, as well as new business models and creative processes. My Arts and Humanities Research Council’s Collaborative Doctoral Partnership Programme funded research will take a deep dive into these models and processes, from creation to consumption. For this work, I have the considerable support of supervisors Ian Cooke and Stella Wisdom (British Library) and Ernesto Priego and Stephann Makri (Human-Computer Interaction Design Centre, City, University of London)[2].

This particular point in time offers an excellent opportunity to consider the digital comics, and specifically UK, landscape. We seem to be past the initial enthusiasm for digital technologies when babies and bathwater were ejected with abandon (see McCloud 2000, for example), and probably still in the middle of a retrenchment, so to speak, of that enthusiasm (see Priego 2011 pp278-280). To date, there have been few attempts at viewing the creation to consumption process of print comics in their entirety, and no complete studies of the production and communication models of digital comics. While Benatti (2019) analysed the changes to the roles of authors, readers, and publishers prompted by the creation of webcomics, she admits that “the uncertain future of the comics print communications circuit makes the establishment of a parallel digital circuit…more necessary than ever for the development of the comics medium”. (p316)

Figure 2: Helen Greetham is part of the international Spider Forest Webcomic collective, one way of distributing and marketing digital comics

Benatti was using the wider publishing industry’s process models and the disruption caused by digital technology as a lens through which to view webcomics. Indeed, historians have discovered cohesive patterns in the development of ideas, especially as embodied in print books. These patterns, most often described as cycles, chains, or circuits, follow the book through various channels of creation, production, and consumption. (See Darnton 1982, diagram of Communication Circuit below, for example). However, they have undergone a significant transformation, disruption even, when considered in the context of the digital environment (Murray and Squires 2013 have update Darnton for the digital and self-publishing age). And at first, it seemed that the disruption would prove terminal for certain types of communication, but most especially books and newspapers in print.

What about the production patterns for comics within this publishing context? Have print comics given way to digital comics? And are digital comics the revolution they once seemed?
My research, a scoping study in its first year looking at the UK comics landscape and interviewing comics gatekeepers-mediators (CGMs)[3], seeks to address the gap in the understanding of the creation to consumption process for digital comics. This first year’s work will be followed up by research into the creative process of digital comics writers and artists and what readers might contribute to that process. It will be the first such research to investigate cohesive patterns and production models through interdisciplinary empirical research for UK digital comics: analysing how an idea and digital comic object is formed, communicated, discussed and transformed by all the participants involved, from authors to CGMs to readers.

Freeman, John (2020).   ‘British Comics Industry Q&A’, downthetubes.net: exploring comics and more on the web since 1998. Quoting British comics creator and archivist Lew Stringer in a 2015 assessment of news stand comics on his Blimey! It’s Another Blog About Comics blog.  Available at: https://downthetubes.net/?page_id=7110).

1. For example, the Pulitzer Prize[Maus]; The Guardian’s First Book Award 2001 [Jimmy Corrigan]; Man Booker Prize longlist [Sabrina], not to mention the Journal of Graphic Novels and Comics. The fact that graphic novels are singled out from comics here is another entire blog post… ↩︎

2. Ernesto does a nice line in comics himself: see Parables of Care. Creative Responses to Dementia Care, As Told by Carers and I Know How This Ends: Stories of Dementia Care, as well as The Lockdown Chronicles. ↩︎

3. The word ‘publisher’, at least in its traditional sense, just does not seem to apply to the various means of production and distribution. ↩︎

Posted by Digital Research Team at 8:39 AM

Having a Hoot for International Owl Awareness Day

Who doesn’t love owls? Here at the British Library we certainly do.

Often used as a symbol of knowledge, they are the perfect library bird. A little owl is associated and frequently depicted with the Greek goddess of wisdom Athena. The University of Bath even awarded Professor Yoda the European eagle owl a library card in recognition of his valuable service deterring seagulls from nesting on their campus.

The British Library may not have issued a reader pass to an owl (as far as I am aware!), but we do have a wealth of owl sound recordings in our wildlife and environmental sounds collection, you can read about and listen to some of these here.

British Library digitised image from page 45 of "Travels in Various Countries of Europe, Asia and Africa."

Owls can also be discovered in our UK Web Archive. Our UK Web Archivists recently examined the Shine dataset to explore which UK owl species is the most popular on the archived .uk domain. Read here to find out which owl is the winner.

They also curate an Online Enthusiast Communities in the UK collection, which features bird watching and some owl related websites in the Animal related hobbies subsection. If you know of websites that you think should be included in this collection, then please fill in their online nomination form.

Here in Digital Scholarship I recently found many fabulous illustrations of owls in our Mechanical Curator Flickr image collection of over a million Public Domain images. So to honour owls on International Owl Awareness Day, I put together an owl album.

These owl illustrations are freely available, without copyright restrictions, for all types of creative projects, including digital collages. My colleague Hannah Nagle blogged about making collages recently and provided this handy guide. For finding more general images of nature for your collages, you may find it useful to browse other Mechanical Curator themed albums, such as Flora & Fauna, as these are rich resources for finding illustrations of trees, plants, animals and birds.

British Library digitised image from page 136 of "A Final Reckoning, a tale of Bush Life in Australia. With illustrations by W. B. Wollen"

If you creatively use our Mechanical Curator Flickr images, please do share them with us on twitter, using the hashtag #BLdigital, we always love to see what people have done with them. Plus if you use any of our owls today, remember to include the #InternationalOwlAwarenessDay hashtag too!

We also urge you to be eagle-eyed (sorry wrong bird!) and look out for some special animated owls during the 4th August, like this one below, which uses both sounds and images taken from our collections. These have been created by Carlos Rarugal, our arty Assistant Web Archivist and will shared from the Wildlife, Web Archive and Digital Scholarship Twitter accounts.

One of the benefits of making digital art, is that there is no risks of spilling paint or glue on your furniture! As noted in this tweet from Damyanti Patel "Thanks for the instructions, my kids were entertained & I had no mess to clean up after their art so a clear win win, they really enjoyed looking through the albums". I honestly did not ask them to do this, but it is really cool that her children included this fantastic owl in the centre of one of their digital collages:

Showed the kids this collage guide from the BL & they created some fab images https://t.co/VqJDZ0mYqu pic.twitter.com/IC9b9vJtIS

I quite enjoy it when my library life and goth life connect! During the covid-19 lockdown I have attended several online club nights. A few months ago I was delighted to see that one of these; How Did I Get Here? Alternative 80s Night! regularly uses the British Library Flickr images to create their event flyers, using illustrations of people in strange predicaments to complement the name of their club; like this sad lady sitting inside a bird cage, in the flyer below.

Their next online event is Saturday 22nd August and you can tune in here. If you are a night owl, you could even make some digital collages, while listening to some great tunes. Sounds like a great night in to me! 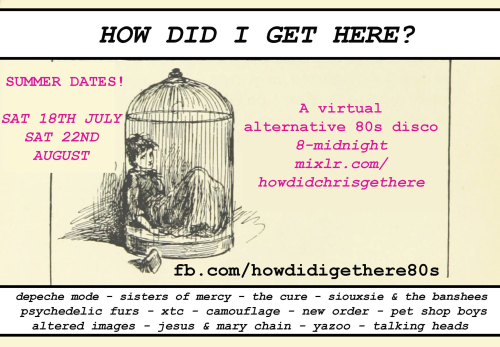 Flyer image for How Did I Get Here? Alternative 80s Night!

Posted by Digital Research Team at 8:26 AM