Visualising the journey of a manuscript’s creation

Working for the Qatar Digital Library (QDL), I recently catalogued British Library oriental manuscript 2361, a musical compendium copied in Mughal India during the reign of Aurangzeb (1618-1707; ruled from 1658). The QDL is a British Library-Qatar Foundation collaborative project to digitise and share Gulf-related archival records, maps and audio recordings as well as Arabic scientific manuscripts. 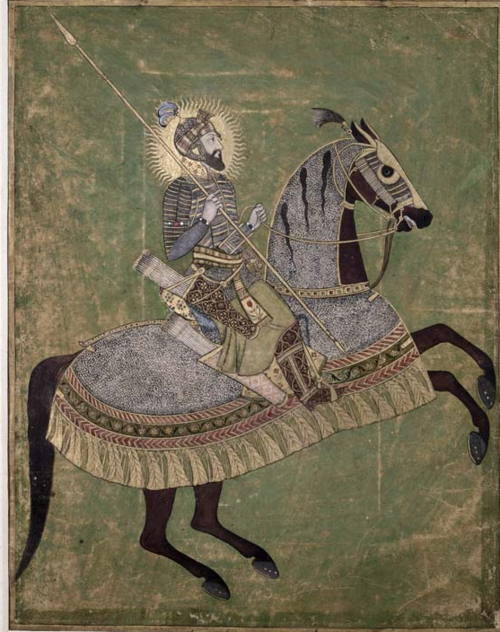 The colophons to Or. 2361 fourteen texts contain an unusually large – but jumbled-up – quantity of information about the places and dates it was copied and checked, revealing that it was largely created during a journey taken by the imperial court in 1663. Seeking to make sense of the mass of bibliographic information and unpick the narrative of the manuscript’s creation, I recorded all this data in a spreadsheet. This helped to clarify some patterns- but wasn’t fun to look at! To accompany an Asian and African Studies blog post, I wanted to find an interactive digital tool to develop the visual and spatial aspects of the story and convey the landscapes and distances experienced by the manuscript’s scribes and patron during its mobile production.

Figure 3: Dull but useful spreadsheet of copy data for Or. 2361.

Many fascinating digital tools can present large datasets, including map co-ordinates. However, I needed to retell a linear, progressive narrative with fewer data points. Inspired by a QNF-BL colleague’s work on Geoffrey Prior’s trip to Muscat, I settled on StoryMap, one of an expanding suite of open-source reporting, data management, research, and storytelling tools developed by Knight Lab at Northwestern University, USA.

Requiring no coding ability, the back-end of this free, easy-to-use tool resembles PowerPoint. The user creates a series of slides to which text, images, captions and copyright information can be added. Links to further online media, such as the millions of images published on the QDL, can easily be added.

The basic incarnation of StoryMap is accessed via an author interface which is intuitive and clear, but has its quirks. Slide layouts can’t be varied, and image manipulation must be completed pre-upload, which can get fiddly. Text was faint unless entirely in bold, especially against a backdrop image. A bug randomly rendered bits of uploaded text as hyperlinks, whereas intentional hyperlinks are not obvious.

StoryMap’s most interesting feature is an interactive map that uses OpenStreetMap data. Locations are inputted as co-ordinates, or manually by searching for a place-name or dropping a pin. This geographical data links together to produce an overview map summarised on the opening slide, with subsequent views zooming to successive locations in the journey.

I had to add location data manually as the co-ordinates input function didn’t work. Only one of the various map styles suited the historical subject-matter; however its modern street layout felt contradictory. The ‘ideal’ map – structured with global co-ordinates but correct for a specific historical moment – probably doesn’t exist (one for the next project?).

With clearly signposted advanced guidance, support forum, and a link to a GitHub repository, more technically-minded users could take StoryMap to the next level, not least in importing custom maps via Mapbox. Alternative platforms such as Esri’s Classic Story Maps can of course also be explored.

However, for many users, Knight Lab StoryMap’s appeal will lie in its ease of usage and accessibility; it produces polished, engaging outputs quickly with a bare minimum of technical input and is easy to embed in web-text or social media. Thanks to Knight Lab for producing this free tool!

See the finished StoryMap, A Mughal musical miscellany: The journey of Or. 2361.

Posted by Digital Research Team at 10:03 AM