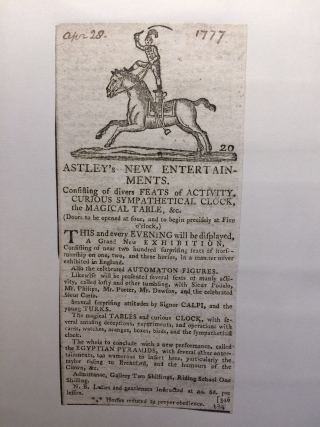 Picture of cutting taken from the Astley's newspaper clippings archive Th.Cts.35 (held at the British Library)

What do you think of when you hear the word “circus”? Lions, tigers, elephants? Ringmasters in coat-tails? Trapeze artists? In fact, most of the images that we commonly associate with circus derive from nineteenth-century examples of the genre. Circus when it first started out in the late eighteenth century was a different kind of entertainment altogether. Yes, there were animal acts, including equestrian riding stunts, and there were also acrobatics. But early circus also included automatons and air balloons, pantomime and fireworks, musical acts and re-enactments of events like the storming of the Bastille. In short, it was a microcosm of the Georgian world which served to re-present important political and cultural activities by re-mixing them with varieties of astonishing physical entertainments. 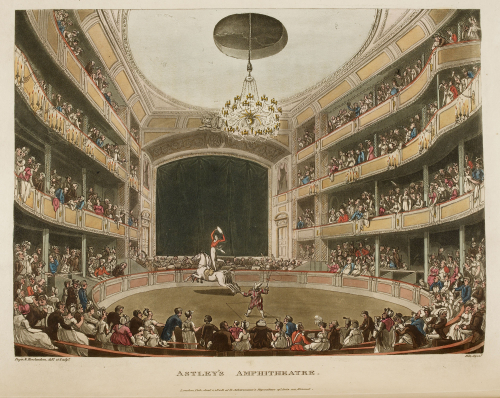 The database that I created, “Reconstructing Early Circus: Entertainments at Astley’s Amphitheatre, 1768-1833” (https://dhil.lib.sfu.ca/circus/), based on materials held by the British Library, aims to bring early circus back from offstage and to connect the ephemeral traces of this eighteenth-century entertainment with the concerns of our contemporary age. 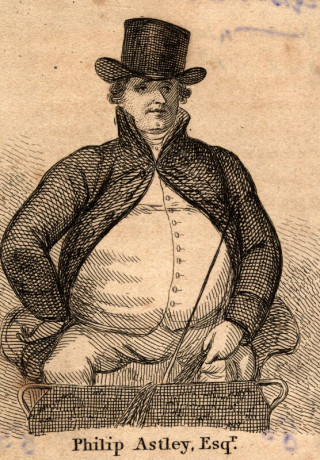 The man credited with “inventing” the form of entertainment known now as circus was Philip Astley. Astley was certainly not the first person to perform popular equestrian entertainments for money, but he is acknowledged to have been the first person to have had the idea of using an enclosed space where he could present his equestrian shows to a paying audience. Over the years, Astley’s Amphitheatre and Riding School evolved to include both a ring and a stage. Astley was an astute businessman and was able to expand his enterprise to include circuses in Dublin and Paris. His success also encouraged other entertainment entrepreneurs to try their hand at the circus business. Sites of entertainment similar to Astley’s sprang up within London and other locations in the British archipelago as well as in Europe and North America, including Jones’s Equestrian Amphitheatre in Whitechapel (1786), Swan’s Amphitheatre in Birmingham (1787), the Edinburgh Equestrian Circus (1790), Ricketts's Equestrian Pantheon in Boston (1794) and Montreal (1797), and the Royal Circus, Equestrian and Philharmonic Academy in London (1782). Circus was not just as a type of entertainment in the metropolis; it was also a transnational phenomenon. 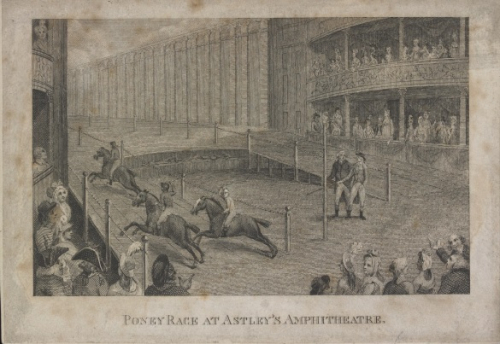 I drew the data for  “Reconstructing Early Circus” from the British Library’s “Astley’s Cuttings From Newspapers” (Th. Cts. 35-37). This source consists of three volumes of close to 3,000 newspaper advertisements of entertainments featured at Astley’s from 1768 to 1833, along with a few manuscript materials and a lock of Astley’s daughter’s hair. The clippings were collected by the theatre manager, James Winston, for a history of theatre which he never published. Working with my research assistant, Emma Pink, I photographed each of the clippings from the BL volumes in the reading room and got 4 undergraduate students to transcribe them. Then I worked with the personnel at Simon Fraser University’s Digital Humanities Research Lab to create the website. Users can browse through the sixty-year history of Astley’s or, using the search function, they can identify the frequency of particular acts or performers, for example. The materials represent a rich treasure trove for scholars of: Romantic-era cultural and media studies; British history; economic and business history; performance studies; fine arts; and cultural memory studies.

As I continue to expand and improve on the site, I hope to use my database to explore connections between early circus and other popular entertainments of the day as well as to expand the site to examine circus locations in transatlantic locations.

Examining the Astley archives allows us to learn more about leisure in the long eighteenth century as well as about the connections between popular entertainment and political and social concerns in Georgian times, and, by extension, in our own era. Lions and tigers and ringmasters you won’t find here, but check out the “little Learned Military Horse,” the trained bees, and, of course, the equestrian feats of Astley himself for more insight into this neglected popular entertainment from 200 years ago. 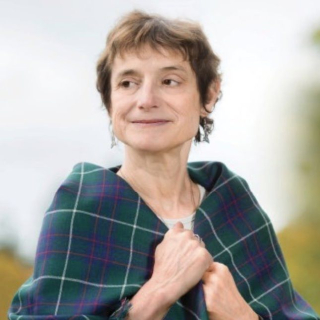 Leith Davis is Professor of English at Simon Fraser University in British Columbia, Canada where she researches and teaches eighteenth-century literature and media history. She is the author of Acts of Union: Scotland and the Negotiation of the British Nation (Stanford UP, 1998) and Music, Postcolonialism and Gender: The Construction of Irish Identity, 1724-1874 (Notre Dame UP, 2005) as well as co-editor of Scotland and the Borders of Romanticism (Cambridge: Cambridge UP, 2004) and Robert Burns and Transatlantic Culture (Ashgate, 2012). She is currently completing a monograph entitled Mediating Cultural Memory in Britain and Ireland, 1688-1745 which explores sites of cultural memory in the British archipelago within the context of the shifting media ecology of the eighteenth century.

This year's public awards 2020 are open for submission, the deadline for entry is NOON (GMT) Monday 30 November 2020

Whilst we welcome projects on any use of our digital collections and data (especially in research, artistic, educational and community categories), we are particularly interested in entries in our public awards that have focused on anti-racist work, about the pandemic or that are using computational methods such as the use of Jupyter Notebooks.

Work will be showcased at the online BL Labs Annual Symposium between 1400 - 1700 on Tuesday 15 December, for more information and a booking form please visit the BL Labs Symposium 2020 webpage.

Posted by Digital Research Team at 10:57 AM