This week is International Games Week in libraries - “an initiative run by volunteers from around the world to reconnect communities through their libraries around the educational, recreational, and social value of all types of games.”

As a volunteer, participant and collaborator on game events organised by Stella Wisdom in the British Library's Digital Scholarship Team, I’ve particularly enjoyed the International Games Week events held at the Library during previous years, including Adventure X and WordPlay. It’s fitting that a national library acknowledges the value of narratives in games and interactive fiction, as well as those held in books and other formats. 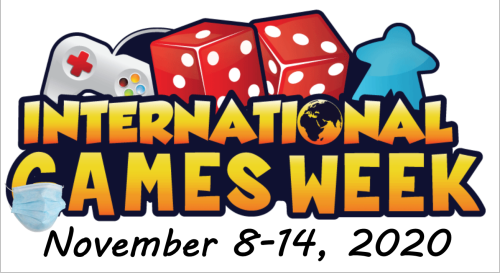 In this post, I wanted to highlight some things that cut across projects I’ve been involved in with the British Library. These include curating UK websites and running online game jams, in addition to the game events mentioned above.

Back in 2018, I co-organised the online Gothic Novel Jam with Stella. In terms of the gothic and supernatural, it’s appropriate that this blog post is published today on Friday the 13th! We’ve blogged about this jam previously, but in summary, the intention was to encourage participants to create games, interactive fiction and other creative outputs using the theme of the gothic novel and British Library Flickr images as inspiration. The response was fantastic, and resulted in a large number of great narrative games being created. I particularly liked As a Glow Brings Out a Haze for the creative reuse of British Library images.

In addition to co-running game jams, I'm a volunteer curator for the UK Web Archive, and as representative for CILIP’s LGBTQ+ Network, I’ve been co-lead on the LGBTQ+ Lives Online project with Steven Dryden from the British Library. This project has focused on identifying UK LGBTQ+ websites, blogs etc. for inclusion in the collection, as a way to preserve them for future generations. To a lesser extent, I’ve also been supporting the curation of the Video Games collection and also Interactive Narratives, which is part of the broader E-publishing trends/Emerging formats collection.

I find it interesting to see where different seemingly unrelated projects overlap, and in this instance, the overlap is an online game called The Tower created by Freya Campbell, which she originally created for Gothic Novel Jam. The game itself is a piece of interactive fiction combining both text and images. For me it was a great example of a narrative that is clearly gothic and dark, but takes a new focus to frame that genre.

This week is Transgender Awareness Week, and as more UK content is published online about transgender issues and experiences, these sites will be added to the UKWA LGBTQ+ Lives collection. The Tower includes subject matter that is particularly high profile in UK media discussions surrounding LGBTQ+ lives at the moment - transgender identities. As the creator of The Tower is based in the UK, this game is now part of the Interactive Narratives and LGBTQ+ Lives collections in the UK Web Archive.

Anyone can suggest UK published websites to be included in the UK Web Archive by filling in this online nominations form: https://www.webarchive.org.uk/en/ukwa/nominate. As part of both International Games Week and Transgender Awareness Week, why not nominate UK websites for inclusion in the Video Games,  Interactive Narratives, and LGBTQ+ Lives Online collections.

Another overlap connected to The Tower, is that Freya exhibited two other games (Perseids, and Super Lunary ep.1) at AdventureX, when it was held at the British Library during International Games Week in 2018 and 2019. Sadly AdventureX is cancelled in 2020 due to Covid-19, but if you make games and interactive fiction, why not consider taking part in AdvXJam, which starts tomorrow.

This post is by Ash Green (@ggnewed) from the CILIP LGBTQ+ Network.