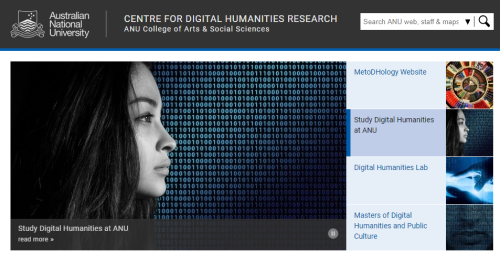 The teaching philosophy and pedagogy of the Centre for Digital Humanities Research (CDHR) at the Australian National University (ANU) focus on research-fuelled, practice-led, object-orientated learning. We value collaboration, experimentation, and individual growth, rather than adhering to standardised evaluation matrix of exams or essays. Instead, students enrolled in jointly-taught undergraduate and postgraduate courses are given a task: to innovate at the intersection of digital technologies and cultural heritage sector institutions. They are given a great degree of autonomy, and are trusted to deliver. Their aim is to create digital prototypes, which open up GLAM sector material to a new audience.

HUMN2001: Digital Humanities Theories and Projects, and its postgraduate equivalent HUMN6001 are core courses for the programs delivered from the CDHR. HUMN2001 is a compulsory course for both the Minor and the Major in Digital Humanities for the Bachelor of Arts; HUMN6001 is a core, compulsory course in the Masters of Digital Humanities and Public Culture. Initially the course structure was quite different: experts would be invited to guest lecture on their Digital Humanities projects, and the students were tasked with carrying out critical evaluations of digital resources of various kinds. What quickly became apparent, was that without experience of digital projects, the students struggled to meaningfully and thoughtfully evaluate the projects they encountered. Many focused exclusively on the user-interface; too often critical factors like funding sources were ignored; the critical evaluative context in which the students operated was greatly skewed by their experiences of tools such as Google and platforms such as Facebook.

The solution to the problem became clear - students would have to experience the process of developing digital projects themselves before they could reasonably be expected to evaluate those of others. This revelation brought on a paradigm shift in the way in which the CDHR engages with students, projects, and their cultural heritage sector collaborators.

In 2018, we reached out to colleagues at the ANU for small-scale projects for the students to complete. The chosen project was the digitisation and the creation of metadata records for a collection of glass slides that form part of the Heritage in the Limelight project. The enthusiasm, diligence, and care that the students applied to working with this external dataset (external only to the course, since this was an ANU-internal project) gave us confidence to pursue collaborations outside of our own institution. In Semester 1 of 2019, Dr Katrina Grant’s course HUMN3001/6003: Digital Humanities Methods and Practices ran in collaboration with the National Museum of Australia (NMA) to almost unforeseeable success: the NMA granted five of the top students a one-off stipend of $1,000 each, and continued working with the students on their projects, which were then added to the NMA’s Defining Moments Digital Classroom, launched in November 2020. This collaboration was featured in a piece in the ANU Reporter, the University’s internal circular.

Encouraged by the success of Dr Grant’s course, and presented with a serendipitous opportunity to meet up at the Australasian Association for Digital Humanities (aaDH) conference in 2018 where he was giving the keynote, I reached out to Mahendra Mahey to propose a similar collaboration. In Semester 2, 2019 (July to November), HUMN2001/6001 ran in collaboration with the British Library.

Our experiences of working with students and cultural heritage institutions in the earlier semester had highlighted some important heuristics. As a result, the delivery of HUMN2001/6001 in 2019 was much more structured than that of HUMN3001/6003 (which had offered the students more freedom and opportunity for independent research). Rather than focus on a theoretical framework per se, HUMN2001/6001 focused on the provision of transferable skills that improved the delivery and reporting of the projects, and could be cited directly in future employment opportunities as a skills-base. These included project planning and time management (such as Gantt charts and SCRUM as a form of agile project management), and each project was to be completed in groups.

The demographic set up of each group had to follow three immutable rules:

Although not all groups strictly implemented these rules, the ones that did benefitted from the diversity and critical lens afforded by this richness of perspective to result in the top projects.

Three examples that best showcase the diversity (and the creative genius!) of these groups and their approach to the British Library’s collection include a virtual reality (VR) concert hall, a Choose-You-Own-Adventure-Game travelling through Medieval manuscripts, and an interactive treasure hunt mobile app. 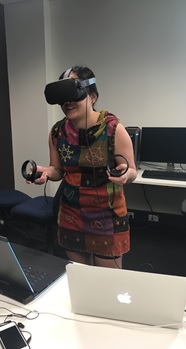 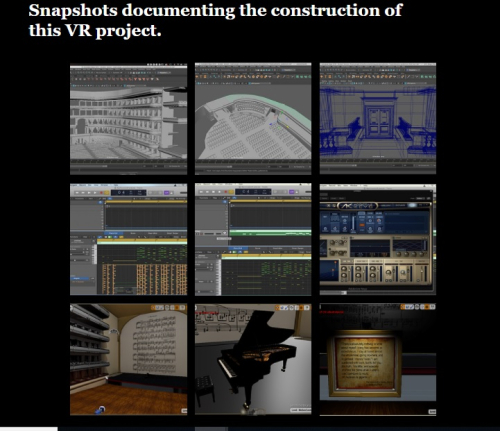 This project is a VR experience of the grand auditorium of the Bolshoi Theatre in Moscow. It has an audio accompaniment of Sergei Rachmaninoff’s Prelude in C# Minor, Op.3, No.2, the score for which forms part of the British Library’s collection. Reflective of the personal experiences of some of the group members, the project was designed to increase awareness of mental health, and throughout the experience the user can encounter notes written by Rachmaninoff during bouts of depression. The sense of isolation is achieved by the melody playing in an empty auditorium.

The project is available through a website with a disclosure, and links to various mental health helplines, accessible at: https://virtuosorachmaninoff.wixsite.com/vrsquared Figure 3:  Homepage of A Fantastic Bestiary

This project is a bilingual Choose-Your-Own-Adventure hypertext game that engages with the Medieval manuscripts (such as Royal MS 12 C. xix. Folios 12v-13, based off the Greek Physiologus and the Etymologiae of St. Isidore of Seville) collection at the British Library, first discovered through the Turning the Pages digital feature. The project workflow included design and background research, resource development, narrative writing, animation, translation, audio recording, and web development. Not only does it open up the Medieval manuscripts to the public in an engaging and innovative way through five fully developed narratives (~2,000-3,000 words each), all the content is also available in Mandarin Chinese.

The team used a plethora of different tools, including Adobe Animate, Photoshop, Illustrator, and Audition and Audacity. The website was developed using HTML, CSS, and JavaScript in the Microsoft Visual Studio Integrated Development Environment.

The project is accessible at: https://thomaslarkin7.github.io/hypertextStory/

Figure 4: (Left) Testing the app at the Australian National Botanical Gardens, (Middle) An example of one of the tasks to complete in ActionBound (Right) Example of sound file from the British Library (a dingo)

This project is a mobile application, designed as a location-based authoring tool inspired by the Pokemon Go! augmented reality mobile game. This educational scavenger-hunt aims to educate players about endangered animals. Using sounds of endangered or extinct animals from the British Library’s collection, but geo-locating the app at the Australian National Botanical Gardens, this project is a perfect manifestation of truly global information sharing and enrichment.

The team used a range of available tools and technologies to build this Serious Game or Game-With-A-Purpose. These include GPS and other geo-locating (and geo-caching), they created QR codes to be scanned during the hunt, locations are mapped using Open Street Map.

The app can be downloaded from: https://en.actionbound.com/bound/BotanicGardensExtinctionHunt.

Such a diverse and dynamic learning environment presents some pedagogical challenges and required a new approach to student evaluation and assessment. The obvious question here is how to fairly, objectively, and comprehensively grade such vastly different projects? Especially since not only do they differ in both methodology and data, but also in the existing level of skills within the group. The approach I took for the grading of these assignments is one that I believe will have longevity and to some extent scalability. Indeed, I have successfully applied the same rubric in the evaluation of similarly diverse projects created for the course in 2020, when run in collaboration with the National Film and Sound Archives of Australia.

The assessment rubric for this course awards students on two axis: ambition and completeness. This means that projects that were not quite completed due to their scale or complexity are awarded for the vision, and the willingness of the students to push boundaries, do new things, and take on a challenge. The grading system allows for four possible outcomes: a High Distinction (for 80% or higher), Distinction (70-79%), Credit (60-69%), and Pass (50-59%). Projects which are ambitious and completed to a significant extent land in the 80s; projects that are either ambitious but not fully developed, or relatively simple but completed receive marks in the 70s; those that very literally engaged with the material, implemented a technologically straightforward solution (such as building a website using WordPress or Wix, or using one of the suite of tools from Northwestern University’s Knightlab) were awarded marks in the 60s. Students were also rewarded for engaging with tools and technologies they had no prior knowledge of. Furthermore, in week 10 of a 12 week course, we ran a Digital Humanities Expo! Event, in which the students showcased their projects and received user-feedback from staff and students at the ANU. Students able to factor these evaluations into their final project exegeses were also rewarded by the marking scheme.

Notably, the vast majority of the students completed the course with marks 70 or higher (in the two top career brackets). Undoubtedly, the unconventional nature of the course is one of its greatest assets. Engaging with a genuine cultural heritage institution acted as motivation for the students. The autonomy and trust placed in them was empowering. The freedom to pursue the projects that they felt best reflected their passions, interests in response to a national collection of international fame resulted, almost invariably, in the students rising to the challenge and even exceeding expectations.

This was a learning experience beyond the rubric. To succeed students had to develop the transferable skills of project-planning, time-management and client interaction that would support a future employment portfolio. The most successful groups were also the most diverse groups. Combining voices from different degree programs, languages, cultures, genders, and interests helped promote internal critical evaluations throughout the design process, and helped the students engage with the materials, the projects, and each other in a more thoughtful way. 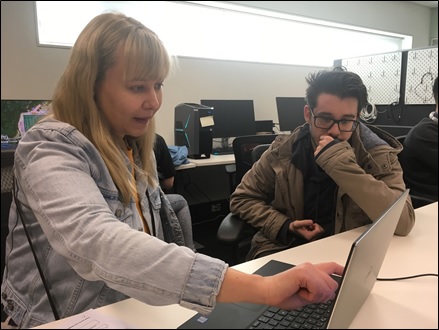 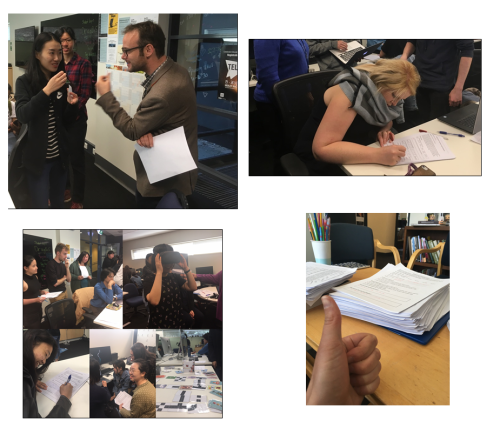 Figure 7: User-testing feedback! Staff and students came to see the projects and support our students in the Digital Humanities Expo in 2019. 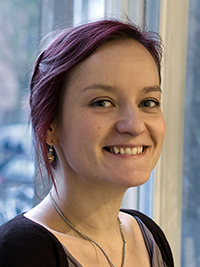 Terhi Nurmikko-Fuller is a Senior Lecturer in Digital Humanities at the Australian National University. She examines the potential of computational tools and digital technologies to support and diversify scholarship in the Humanities. Her publications cover the use of Linked Open Data with musicological information, library metadata, the narrative in ancient Mesopotamian literary compositions, and the role of gamification and informal online environments in education. She has created 3D digital models of cuneiform tables, carved boab nuts, animal skulls, and the Black Rod of the Australian Senate. She is a British Library Labs Researcher in Residence and a Fellow of the Software Sustainability Institute, UK; an eResearch South Australia (eRSA) HASS DEVL (Humanities Arts and Social Sciences Data Enhanced Virtual Laboratory) Champion; an iSchool Research Fellow at the University of Illinois at Urbana-Champaign, USA (2019 - 2021), a member of the Australian Government Linked Data Working Group; and, since September 2020 has been a member of the Territory Records Advisory Council for the Australian Capital Territory Government.

This year's public awards 2020 are open for submission, the deadline for entry is NOON (GMT) Monday 30 November 2020

Whilst we welcome projects on any use of our digital collections and data (especially in research, artistic, educational and community categories), we are particularly interested in entries in our public awards that have focused on anti-racist work, about the pandemic or that are using computational methods such as the use of Jupyter Notebooks.

Work will be showcased at the online BL Labs Annual Symposium between 1400 - 1700 on Tuesday 15 December, for more information and a booking form please visit the BL Labs Symposium 2020 webpage.

Posted by Digital Research Team at 10:20 AM