Today Wikipedia, the world’s collaborative, online, free encyclopedia is marking it's twentieth birthday. Many celebrations are underway for this, including a #WikiLovesCakes online bake off competition organised by Wikimedia UK, which will be judged by Sandi Toksvig and Nick Poole.

Alas I am lacking in baking skills (though I am excellent at cake eating!), so I’m marking #Wikipedia20 with a reflection on how the British Library has collaborated with Wikimedia and contributed to Wikipedia over the last few years. 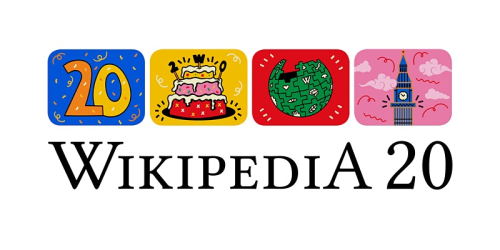 I am also delighted to announce that a memorandum of understanding has been signed this month between the British Library and Wikimedia UK for a new Wikimedian-in-Residence. My colleague Richard Davies who signed this agreement on behalf of the Library said:

“The Library has learnt a great deal both from and since our first Wikipedian-in-Residence in 2012-2013, Andrew Gray. Through this new residency we will be able to build on this hugely successful work with Wikipedia, across all our collection areas. It will also enable the Library to contribute more to the GLAM-Wiki Community in a coordinated and sustainable way, with particular emphasis on increasing the visibility of our digital collections, data and research materials from underrepresented people and marginalised communities through the development of innovative partnership projects.”

We are really looking forward to hosting this new residency, so watch this blog for future updates on this project. Fortunately this residency will be building upon existing experience, as British Library colleagues from many departments have actively engaged with Wikipedia and the Wikimedia family of platforms over several years. I will do my best to give summaries of some of these below:

BL Labs has collaborated with Wikimedia Commons in a number of ways, including:

BL Labs have also supported the excellent Wikipedia project Wiki-Food and (mostly) Women, this is an ongoing partnership with the Oxford Symposium of Food & Cookery (OSFC), which was initiated in 2015 by experienced Wikipedia editor and trainer Roberta Wedge, former OSFC Trustee Bee Wilson, OSFC Director Ursula Heinzelmann and the British Library’s Polly Russell. This project has held regular Wikipedia edit-a-thons at the British Library and in Oxford, providing training and support for Wikipedia editing with the aim of increasing and improving the articles about food, especially ones about women’s contributions to food and cooking culture. When this project started 90% of Wikipedia editors were men and this gender bias was reflected in Wikipedia coverage. There is still a bias, but thanks to the efforts of Wikipedia and many wonderful projects worldwide this gender balance is being addressed. Their plans for edit-a-thon events in 2020 were curtailed by Covid-19, but they did run some online training sessions and surgeries with Roberta Wedge at the OSFC virtual conference in 2020.

Another collaboration addressing gender balance issues was a recent Wikithon: Women in Leeds event, which took place on 22nd November 2020, to create and improve Wikipedia articles about some of the amazing women of Leeds, past and present. This was part of the British Library's cultural programme in Yorkshire, working with other GLAM organisations in the region. It was co-organised by Kenn Taylor from the British Library, in partnership with Rhian Isaac of Leeds Libraries and Lucy Moore of Leeds Museums & Galleries, for the season of events accompanying the British Library’s exhibition, "Unfinished Business: The Fight for Women’s Rights".

Hope Miyoba, Wikimedian in Residence for the Science Museum Group, who is based at the National Science and Media Museum in Bradford, gave an excellent training session on how to edit Wikipedia and the event produced new articles for Catherine Mary Buckton, the first woman elected to public office in Leeds, sharpshooter and circus performer Florence Shufflebottom, and philanthropist Marjorie Ziff who is notable for her contributions to the Jewish community in Leeds, whose article was further improved by the Women in Red editing community. This event also inspired me to create a new Wikipedia article for writer Rosie Garland, who is also a singer in Leeds goth band The March Violets.

Positive feedback was received from participants at this event, with comments such as ‘my 9 year old daughter says she wants to do this forever’, ‘just finished Uni and missing researching things, so this is definitely a good lockdown activity to get into!’ and ‘I’m thinking about how to incorporate women and Wikipedia entries into my teaching!’. 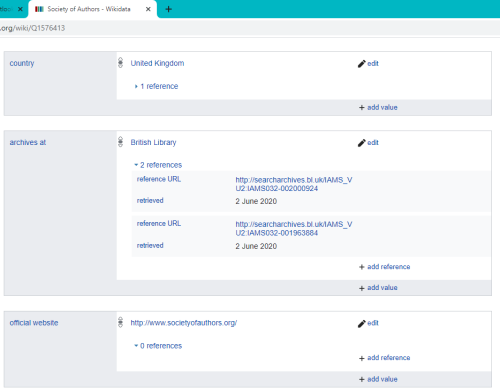 Wikidata page for the Society of Authors

In addition to editing Wikipedia and adding images to Wikimedia Commons, a number of British Library staff have been editing Wikidata. In 2020 Eleanor Casson from the Contemporary Literary and Creative Archives team updated seventy Wikipedia articles and seventy two Wikidata entries with information about their collections, see the entry for the Society of Authors example in the image above, and Graham Jevon from the Endangered Archives Project has been using the Wikidata reconciliation service to validate and create authority records. This work enabled him to create more than three hundred authority records for people identified in a digitised collection of photographs from South America, which will be published online soon. Graham says:

"Wikidata has proved particularly helpful for continued productivity and collaboration while working from home during lockdown. It has enabled a colleague without access to internal cataloguing systems to create and edit authority records in Wikidata, which I can then extract to update the BL’s systems. This is a win-win. It helps us update our own catalogue records while simultaneously enhancing the shared Wikidata resource."

Before I end this post, I also want to flag up the excellent work done by the global GLAM–Wiki community (galleries, libraries, archives, and museums, also including botanic gardens and zoos), which advises and supports cultural institutions to share their resources with the world through collaborative projects with experienced Wikipedia editors.

Also the awesome #1Lib1Ref campaign (abbreviation for one librarian, one reference), which invites librarians around the world, and anyone who has a passion for free knowledge, to add missing references to articles on Wikipedia, with the aim to reduce Wikipedia's backlog of citation needed notices.

Please do add some references and eat some cake to celebrate Wikipedia's 20th birthday this year, I know I will be. You may also like to listen to BBC Radio 4’s The World At One programme from earlier today (15/01/2021), where David Gerard and myself discuss Wikipedia and libraries, you can hear this section from 37 minutes 55 seconds into the recording.