Legacies of Catalogue Descriptions and Curatorial Voice: training materials and next steps

Over the past year British Library staff have contributed to the AHRC-funded project "Legacies of Catalogue Descriptions and Curatorial Voice: Opportunities for Digital Scholarship". Led by James Baker, University of Sussex, the project set out to demonstrate the value of corpus linguistic methods and computational tools to the study of legacies of catalogues and cultural institutions’ identities. In a previous blogpost James explained the historical research that shaped this project and outlined the original work plan which was somewhat disrupted by the pandemic.

As we approach the end of the first phase of this AHRC project, we want to share the news about the completion as part of this project of the training module on Computational Analysis of Catalogue Data. The materials take into account the interests and needs of the community for which it is intended. In July James and I delivered a couple of training sessions over Zoom for a group of GLAM professionals, some of whom had previously shown interest in our approach to catalogue data by attending Baker’s British Academy-funded “Curatorial Voice” project. 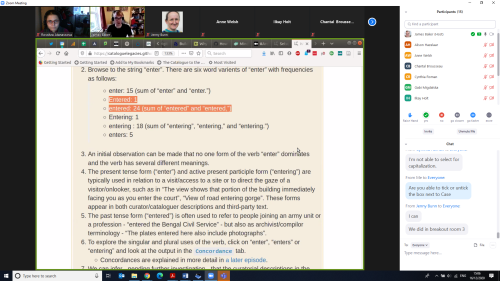 Screenshot from the December session on Zoom showing a task within the training module.

In response to feedback from these sessions we updated the lessons to query data derived from descriptions of photographs held at the British Library. This dataset reflects better the diversity of catalogue records created by different cataloguers and curators over time. British Library staff then took part in a Hack-and-Yack session which demonstrated the use of AntConc and approaches from computational linguistics for the purposes of examining the Library’s catalogue data and how this could enable catalogue related work. This was welcomed by curators, cataloguers and other collections management staff who saw value in trying this out with their own catalogue data for the purpose of improving its quality, identifying patterns and ultimately making it more accessible to users. In December, the near-finished module was presented over Zoom to a wider group of GLAM professionals from the UK, US and Turkey. 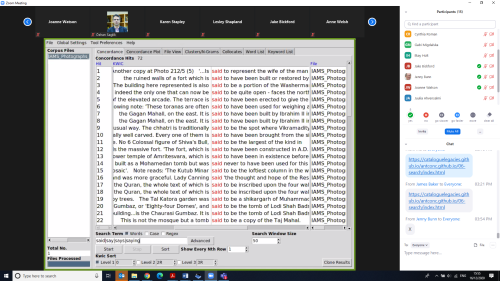 Screenshot from the December session demonstrating how to use the concordance tool in AntConc.

We hope that the training module will be widely used and further developed by the community and are delighted that it has already been referenced in a resource for researchers in the Humanities and Social Sciences at the University of Edinburgh. In terms of next steps, the AHRC has granted an extension for holding some partnership development activities with our partners at Yale University and delivering the end-of-project workshop which will hopefully lead to future collaborations in this space. 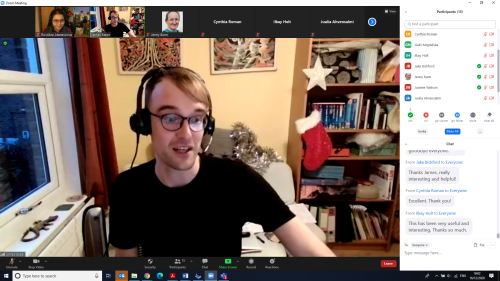 Personally, I gained a lot from this fruitful collaboration with James and Andrew Salway as it gave me a first-hand experience of developing a “Carpentries-style” lesson, understanding how AntConc works, and applying corpus linguistic methods. I want to thank [British Library staff who took part in the training sessions and in particular those colleagues who supplied catalogue data and shared curatorial expertise: Alan Danskin, Victoria Morris, Nicolas Moretto, Malini Roy, Cam Sharp Jones and Adrian Edwards.