The Butcher, the Baker, but not the Candlestick Maker

It’s hard to believe, but it’s almost a year since we took a look at some of the weird and wonderful epithets that have been used to distinguish individuals in the Library’s archives and manuscripts catalogue. Twelve months on, the Western Manuscripts cataloguing team is still working its way through the personal name records – correcting errors, enhancing records, and merging duplicate names.

In doing so, yet more items of epithetical interest have emerged. Who amongst us would not have their curiosity piqued by a man described as a pastry-maker and impersonator of King Ferdinand of Portugal? I’m sure we would all wish to take our hats off to the person labelled advocate for world peace (could there be a more noble calling?). We might be impressed at the range of skills held by the builder and composer and be in awe of the derring-do associated with the British flying ace.

But it’s in the area we today call nominative determinism that I’ve started to see some patterns. You know the kind of thing: the farmer whose surname is Farmer, the miller called Miller, and so on. Those are the obvious ones but with a bit of lateral thinking one can find some slightly less obvious examples in Explore Archives and Manuscripts. Nominative determinism once removed, if you like.

The world of religion is a rich seam. We have clergy of various types called Parsons, Bishop, Deacon, Vicars, and Dean, although I’m not sure being called Demons is the most appropriate name for the former owner of a collection of religious treatises.

Then there are the trades and professions. In the catalogue we have a master mason called Stone and a joiner called Turner. And if there’s one thing a bricklayer needs it’s physical strength so being called Backbone is a good start. A schoolmaster called Read makes sense, and when you think of the materials a jeweller works with then so does being called Dargent. A baker called Assh seems ironic (perhaps he was a graduate of the King Alfred School of Baking).

I don’t think there could be a more appropriate name for a soldier than Danger (although Bullitt comes close), and Haddock and Waters seem apt for seafarers too. Ditto, an explorer called Walker.

But of course there are always those who refuse to play along, those who didn’t get the memo. So we have the carpenter called Butcher, the butcher called Baker, the draper called Cooper, the groom called Chandler, the tailor called Fisher, and the mason called Mercer.

And finally, I am disappointed to report that the individual named Le Cat was not, in fact, a burglar. 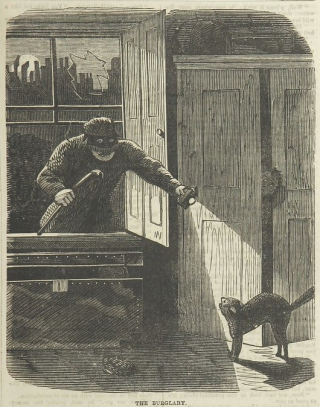 British Library digitised image from page 47 of "The Wild Boys of London; or, the Children of Night. A story of the present day. With numerous illustrations" available on our Flickr collection