At the beginning of this month, I began a work placement with the British Library's Endangered Archives Programme (EAP). The EAP hosted a group of University College London students for several projects, and I was working to further connect EAP collections with Wikimedia. We were able to tailor the project to our interests, which meant that I was able to spend my placement researching and writing about two pioneering women photographers, Marie-Lydie Bonfils (EAP644) and Annemarie Heinrich (EAP755).

I began with Marie-Lydie Bonfils (1837–1918), an early woman photographer and co-owner of the Maison Bonfils studio in Beirut. The Bonfils family archive was digitised in a 2013 project between the EAP and the Jafet Memorial Library, American University of Beirut, and the physical archive is currently preserved at the Sursock Museum.

Perhaps unsurprisingly to those interested in women’s history, while her husband, Félix Bonfils, already had his own Wikipedia article, Marie-Lydie did not. So, I created a new article for her, adding to Félix’s along the way as well. I worked from as many biographical sources as I could possibly access online, including the excellent EAP blog post on Marie-Lydie.

Wikipedia’s notability criteria were a concern for me when publishing. Topics on Wikipedia must be considered “notable” to avoid needless and self-promotional content. This can have the unintended consequence of noteworthy articles being removed if they are not able to demonstrate their significance to other users. Balancing the objective language of Wikipedia with the need to persuade others of Marie-Lydie’s importance was something I had to be careful of when writing the text.

Once published, the article was given a C rating, which shows room for improvement and expansion. As I was waiting in suspense to see if the article would be removed entirely, a C was really quite exciting! Wikipedia articles are ongoing, collaborative projects rather than the completed essays that I am more used to in my studies. This has encouraged me to have a different and more productive mindset about my work more broadly.

Next, I began to look into Annemarie Heinrich (1912–2005). A German photographer who lived most of her life in Argentina, Heinrich was particularly famous for her celebrity portraits, such as those of Carmen Miranda, Pablo Neruda and Eva Perón. Her archive was added to the EAP collections in 2016, in a project with the Institute for Research in Art and Culture, Universidad Nacional de Tres de Febrero, Argentina. I expanded upon Heinrich’s short existing Wikipedia article.

On beginning my research, I discovered that her article on Spanish Wikipedia was much more extensive. This provided a useful starting point for biographical information and tracking down additional citations (thank you GCSE Spanish!). Heinrich’s lack of recognition on the English-speaking web made research difficult, but also highlighted the importance of adding more information about her onto English Wikipedia. 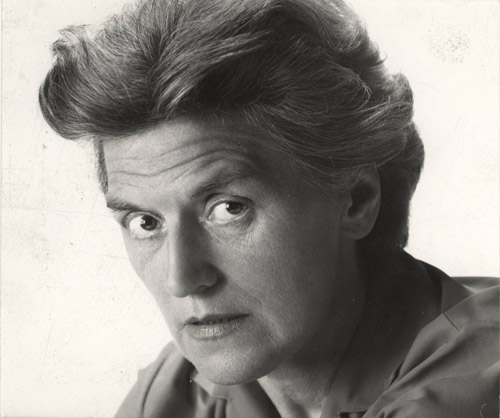 Wrapping my head around Wikidata

I was also introduced to Wikidata on my placement, another of Wikimedia’s projects consisting of open linked data and a completely unknown field to me. On the placement, we were able to attend the IFLA Wikidata and Wikibase Working Group office hour. The thought-provoking whistle-stop tour of the platform that we were given in this meeting had me creating an account immediately after closing the Zoom call tab. 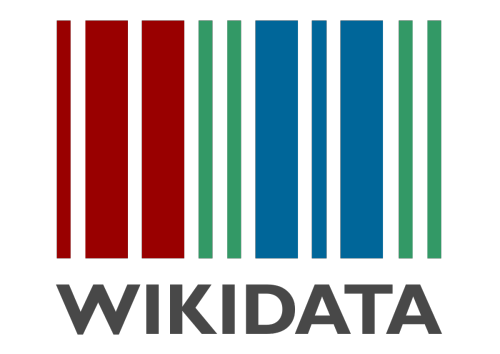 As expected due to their Wikipedia articles, Félix Bonfils and Annemarie Heinrich had Wikidata item entries already, but so did Marie-Lydie, their son, Adrien, and Maison Bonfils. This is likely because of the generally less intensive notability criteria on Wikidata.

I did have a few challenges with Wikidata over my second week. One arose when I tried to add the EAP to the Bonfils’ items. Adrien Bonfils had an existing property for “has works in the collection”, with museums and galleries listed, so I added the EAP to this section. However, on looking at a similar artist’s item entry, I found that there is also a property for “archives at” that might better apply. Wikidata entry for the Bonfils Collection

Seeing this, I not only realised that I might have used the wrong category, but also that there might be others that were more relevant that I just hadn’t seen yet! Being able to search for each qualifier allows for a flexible and tailored user experience but, for a newbie, the amount of choice can be a bit overwhelming! The upside is that Wikidata is quite forgiving, with changes easily made and explanatory symbols popping up when the system recognises a mistake (as can be seen in the image below). 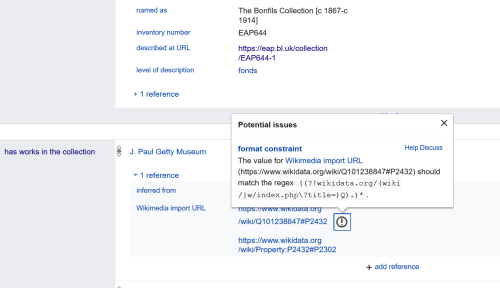 Amended Wikidata entry for the Bonfils Collection on Wikidata

To sum up, researching the lives and careers of these women photographers from the EAP collections has been fascinating. It has been so rewarding to help to increase their online discoverability, and that of the EAP.

Working remotely, this placement was bound to be unusual in some ways, but the BL team was really welcoming and encouraged us all to ask lots of questions (which I absolutely did!). I have learnt a lot about Wikimedia in these few weeks and I will definitely continue exploring and making edits in the future.

This is a guest post by UCL Archives and Records Management MA student and recent Wiki convert, Hope Lowther (@hopelowther)