The New Media Writing Prize is awarded annually to interactive works that use technology and digital tools in exciting and innovative ways. Organised by Bournemouth University, the prize is now in its 12th year and open for entries until 26th November 2021.

The homepage banner on the New Media Writing Prize website

The British Library hosted a Digital Conversations event to celebrate the 10th anniversary of the prize in 2019 and as part of our work on collecting and preserving emerging formats, last year we started building a special collection to archive all shortlisted and winning entries to the prize in the UK Web Archive. Thanks to Joan Francis for her valued support adding targets and metadata into the Annotation and Curation Tool, at the moment of writing, the collection stands at 226 websites, including not only all the works that were web-based and live at the moment of collection, but blog posts, press kits, online reviews and author’s websites as well. This kind of contextual information (like the data recorded on the ELMCIP Knowledge Base website) is especially valuable in those instances where the work itself couldn’t be captured, due to the limitations of web archiving tools, or the fact that it had already disappeared from the Internet. More information on how the collection was conceived and developed is available in the Collection Scoping Document on the British Library Research Repository.

In order to improve access to the collection and assure quality for the websites we captured, a PhD placement project started at the beginning of this June. Tegan Pyke, from Cardiff Metropolitan University, is working on the collection to identify best captures for each of these works and is also developing a creative response to the collection.

From the New Media Writing Prize shortlists, a total of 78 works have been captured, with each work averaging 13 instances to compare and contrast. Each instance represents a web crawl undertaken by the team from the Emerging Formats project. 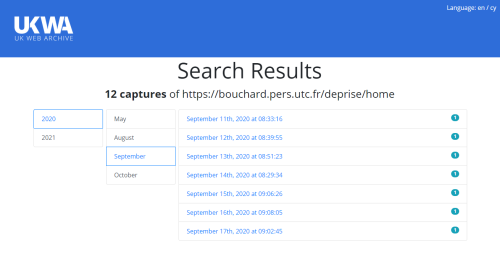 One of the most difficult aspects of this work has been deciding what, exactly, constitutes an ‘acceptable’ capture. By nature digital works are highly complex—featuring audio, visual, and kinetic assets—and using bespoke platforms, formats, and code. These attributes are heightened by the speed at which technology changes; what was acceptable a decade ago may be entirely defunct today, as is the case with Adobe removing their Flash Player support.

After an initial overview of the collection, I came to the conclusion that a strict set of criteria wouldn’t be appropriate. Nor would the capture of all aspects of a work, as many—such as Amira Hanafi’s What I’m Wearing and J R Carpenter’s The Gathering Cloud—make use of external links or externally hosted image and video files. If these lie outside the UK Legal Deposit’s scope, capturing them in their entirety becomes more difficult and sometimes impossible.

Instead, I decided to focus on narrative, asking three questions as I approached each instance:

If an instance fulfils these questions, it’s acceptable, with the most complete of those captures being identified as suitable for display in the archive.

At this point, I’m half-way through comparing instances for the collection. Of the pieces captured, just less than half meet the criteria above. Out of these, most can be improved by additional crawls that capture the missing assets. Those that cannot be improved have, for the most part, been affected by software deprecation or EOL (end-of-life), where support has been completely removed.

I’m aiming to finish my review of the collection over the next couple of months, at which point I hope to provide further insight into the process. I’ve also started a collaboration with the BL's Wikimedian-in-Residence, Lucy Hinnie, to plan a Wikidata project related to the collection aiming to make use of contextual data points collected during its creation—I’m sure you’ll read about this work here soon!

This post is by Giulia Carla Rossi, Curator of Digital Publications on twitter as @giugimonogatari and Tegan Pyke, a PhD student at Cardiff Metropolitan University currently undertaking a placement in Contemporary British Published Collections at the British Library.

Posted by Digital Research Team at 9:10 AM