On Digital Technologies, Our Cultural Heritage and Global Warming. How do they come together in Venice?

Global warming does not affect only the environment, it affects the entire system we live in. We can’t think of it as detached from gender, social and racial inequalities. Neither as something separated from our cultural heritage. For this reason, when we think about actions we shouldn’t focus only on emissions reductions, but also think about how to preserve our cultural and artistic production and learn how this, with the aid of new technologies, can help us find new ways to shape our future.

Last year, during my spare time, with the help of Marco Magini (writer and environmental policy adviser), Paolo Nelli (writer) and Maddalena Vatti (producer) I started investigating what role digital technologies play in a city like Venice, which is notoriously under the threat of rising waters, and even more so with the increased global warming.

On the 13th of November 2019 an exceptional acqua alta (a high tide) hit the city bringing one of the worst devastation of the last century. Various archives, buildings, commercial activities, homes and cultural venues were damaged. This prompted a question: what can we understand from an event like this? Is the case of Venice an isolated one or is it a cautionary tale for humanity? After all Venice is not the only city which is sinking and where rising tides threaten to unravel the urban fabric. We should not simply mourn the devastation and start to repair the damage, we should consider the event as an opportunity to think about the direct impact of global warming on our cultural heritage and what we can do to reduce it.

While conducting interviews with scholars, experts, professionals and citizens with the aim of producing a podcast, we slowly came to understand the role and potential of digital technologies in the study of the evolution of a city in respect to changing climate and urban conditions, as well as the role these play in its preservation.

A fantastic example of digital preservation  is the one carried out  between the 6th and 17th of July 2020 by a team from the Factum Foundation for Digital Technology in Conservation in collaboration with the Cini Foundation, EPFL and Iconem (https://www.factumfoundation.org/pag/1640/recording-the-island-of-san-giorgio-maggiore). They spent twelve days in Venice recording the Island of San Giorgio Maggiore in its entirety. The result was a virtual rendering of the island made using a mix of LID long-range LIDAR scanning to capture the overall shape of the buildings, external and internal views and high resolution photogrammetry to add the surface detail to that. The island was recorded from more than 600 different recording spots, from which a massive 60.000 million-point cloud was generated. The data acquired through photogrammetry is currently being merged with the point-clouds with the aim of creating a 3D model of the whole island. 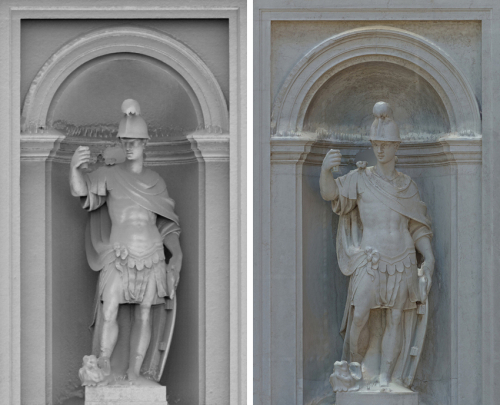 This massive work enabled researchers to study the sculptures and the inscriptions that are high up on the facade of San Giorgio but also to analyse the way that the plaster covering the walls was being affected by salt and peeling off.

Thanks to these data it is now possible to carry out really detailed recording of the breakdown of a surface and also monitor the speed at which the cobalt coverings are being blown off by the salt, the speed of decay, to really look and create data to discuss how best to preserve the material heritage on the island.

Camera obscura, painting and digital image analysis: what can the past tell us about the present and the future

It is also possible to use paintings and buildings to look at the past to learn our present. In fact, these artifacts can unconsciously record events and phenomena that postdate their own creation, carrying them into the future.

The researcher in atmospheric physics and cultural heritage Dario Camuffo has conducted a scientific analysis of the works of Venetian painters, Canaletto in particular, depicting buildings and compared them with the state of the very same buildings today in an attempt to calculate the impact of land subsidence in Venice. 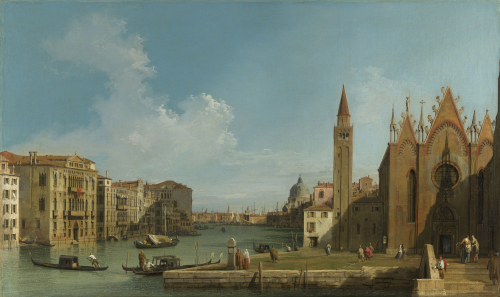 As professor Camuffo has written, “in general paintings provide a qualitative image, but in Venice’s case, a quantitative evaluation of the apparent sea level rise is possible, thanks to accurate paintings by Canaletto and Bellotto, drawn with the aid of the camera obscura. The paintings accurately reproduce all of the details with a high degree of precision, including the algae belt. […] By analysing these paintings, and comparing them with the algae level we see today, we can extend our knowledge of Venice’s submersion, reaching back in time almost as far back as three centuries.”

How many stories and information are buried in the archives? Deep learning image analysis can help to reveal them, we just need to think creatively.

Maps and literature can also reveal more stories about a city than we think.

UCL/Bartlett Institute Professor Sophia Psarra, drawing inspiration from Italo Calvino’s Invisible Cities and Le Corbusier’s discarded project for the Venice Hospital, has studied the urban evolution of Venice computing the distribution and distances between bridges, calli (=tiny alleys), squares and wells over time. The analysis, which is based on the approaches developed within the world of space syntax, has shown that Venice has and still evolves as a system that resembles a highly probabilistic ‘algorithm’.

What seems a chaotic evolution is in fact the result of the interaction between space and social activity. Maps and data analysis can reveal the modularity of a city and the traces of how social activities have interacted and forged the space. These can help see new connections between literary imagination and the evolution of our society but also help us understand how we can imagine a future which is affected by growing uncertainties.

Digital technologies applied to our cultural heritage as these three examples have shown are an aid to study the past and imagine the future. They can help understand how we as a society can evolve, but also how all our cultural productions are sources of incredible information if we know how to look at them. We can measure the impact of global warming on our cultural artifacts and try to imagine a better future.

To know more on the role of Venice as a vantage point from where to look at the growing emergencies surrounding us –– environmental, cultural, social, and technological –– you can listen to the podcast The Fifth Siren (thefifthsiren.com) and join us for a British Library free online event on Monday 8th November with Professor Sophia Psarra and architectural artists Ila Bêka and Louise Lemoine. More info here: https://www.bl.uk/events/venice-tales-of-a-sinking-city.

This post is by Dr Giorgia Tolfo (@giorgiatolfo), Data and Content Manager for the Living with Machines project.

Posted by Digital Research Team at 10:22 AM