A Manuscript Reunited – and a IIIF Viewer Issue

This blog post is by Dr Adi Keinan-Schoonbaert, Digital Curator for Asian and African Collections, British Library. She's on Twitter as @BL_AdiKS.

Last year we saw a meticulous detective work by Arabic Scientific Manuscripts Curator Bink Hallum (British Library Qatar Foundation Partnership) to digitally reunite a thousand-year-old manuscript ending up in two different libraries. This is a Christian Arabic miscellany with texts on herbal remedies, medicine, astrology and other topics. Some of this manuscript’s folios are located at the British Library (on Qatar Digital Library: Or. 8857), others at the Biblioteca Ambrosiana in Milan (X 201 sup) - and some have been lost from the original manuscript.

Luckily, not only that both libraries have digitised their respective folios of this manuscript – they also made the digitised images available in IIIF. Being well aware of the benefits of IIIF, Bink has demonstrated in his blog post how to use the Mirador viewer to view both manuscript shelfmarks side by side. This virtual reunification of manuscript folios held in different collections has the potential to encourage and facilitate further research into Abbasid scientific traditions amongst Christian monastic communities. 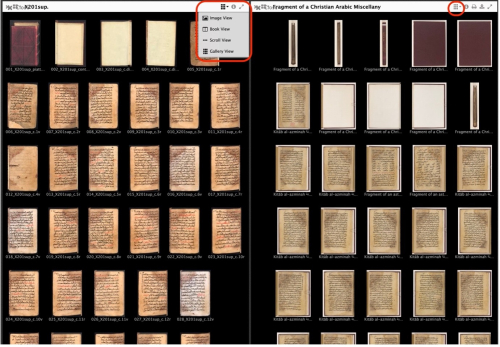 Screenshot from Mirador, showing the two manuscript shelfmarks side by side (taken from Bink’s blog post)

Clearly, I found this to be a very useful example of using IIIF to bring together different instances of the same digital object into one environment. However, I wanted to take this work even further, and create a IIIF manifest which would include all existing folios – and in the right order. Attending Glen Robson’s 5-day IIIF Online Workshop a couple of weeks ago, I could finally give this a go. 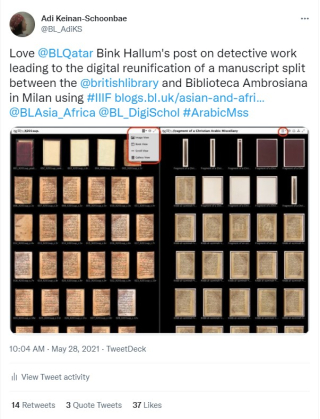 The most straightforward way for me to do that was to grab the QDL manifest and Ambrosiana’s Biblioteca Digitale manifest, and open them in Atom text editor. Editing the JSON files directly, I copied the canvases of one manifest and pasted them into the other, and then removed canvases with images of the book binding and empty folios. The result looked promising – I could now view the united manuscript on the Universal Viewer.

This looks perfect when viewing a single page at a time (‘Single page view’). However, the unified manuscript looks quite strange when selecting the Universal Viewer’s ‘Two page view’, looking at the transition between the last folio of QDL, and the first folio of Ambrosiana. 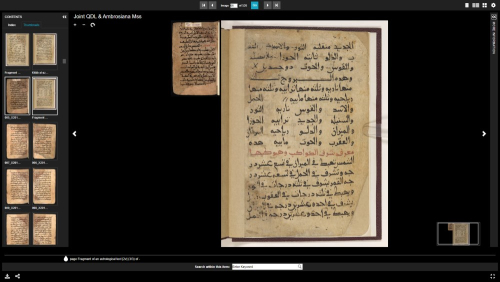 The united manifest, as viewed on the Universal Viewer, using ‘Two page view’

The reason for this visual mismatch is that the images served from Qatar Digital Library are much larger than Ambrosiana’s, and the viewer does not scale them in relation to one another. Trying to tinker with canvas sizes, absolute or relative, within the manifest itself did not help. Apparently, this has been an issue with other use cases – see for example this discussion on GitHub, or Glen’s investigations of this issue when viewing items of different sizes on Mirador and the UV. Hopefully this scaling issue could be addressed, so we can all enjoy the consolidation of IIIF collection items in their full glory.

Posted by Digital Research Team at 10:32 AM