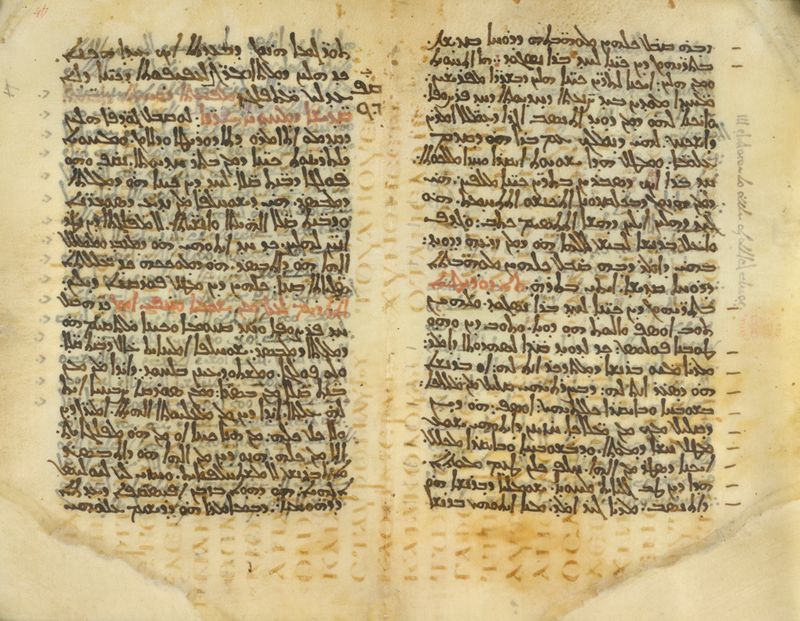 Sometime between the late 8th and early 9th century AD, Simeon, a monk at the convent of Mar Simeon of Kartamin, copied a Syriac text for Daniel, episcopal visitor (periodeutes) of the district of Amid in Mesopotamia (see notes in Add. MS 17211, ff. 53r and 49r). We owe to this event the partial survival of several older copies of Greek works, since Simeon reused parchment sheets from which Greek text had been scraped or washed off to copy the treatise against Joannes Grammaticus of Caesarea by the author Severus of Antioch. Today, Simeon's Syriac copy survives in two manuscripts at the British Library. The Syriac text has been rebound to reconstruct the sequence of the underlying (scriptio inferior), barely visible Greek texts of a 5th century copy of Homer's Iliad (Add. MS 17210) and a 7th century copy of the Gospel of Luke (Add. MS 17211, ff.1-48) as well as a 7th or 8th century copy of Euclid's Elements (Add. MS 17211, ff.49-53).

Add. MS 17211 is, of course, better known as 'Codex Nitriensis', betraying the fact that Simeon's manuscript once belonged to the convent library of St Mary Deipara in the Nitrian Desert of Egypt. Its text, containing parts the Gospel of Luke, is also known in New Testament scholarly circles under its Gregory-Aland 'number' R or 027.

Many ancient texts survive as palimpsests, the faint remains of texts on reused parchment that sometimes reappear over time or are recovered with the help of modern technology. A famous example of a Greek palimpsest and the use of cutting-edge technology used to recover the underlying text is the Archimedes Palimpsest. The Rinascimento Virtuale project (see the official site in Italy or at Hamburg University), a collaboration between 51 partners (including the British Library) from 26 European countries in 2001-4, featured a number of technological approaches to make palimpsest text readable. The image below was produced as part of the Rinascimento Virtuale project and is the result of a processing algorithm used on standard, high-quality digital images of Codex Nitriensis. A lovely image of the Syriac ms. A nice Serto bookhand as well.

The image certainly highlights that it is often easy to spot that parchment has been reused. The UV image is also very nice to see.

The over-text may sound boring to many people -- after all, who has ever heard of Severus of Antioch? He was patriarch of Constantinople under the emperor Anastasius, up to 517 AD. Unusually he was a monophysite -- Anastasius was sympathetic to that faction in the empire -- and so got dethroned when the other side got power in 517.

The work shown here, "Against the impious John the Grammarian" (yes, that is the title) is part of the political infighting, in the guise of theology, that was going on at that time in the empire.

I'm not sure whether the work has ever been translated into English. I think it has been published in the Corpus Scriptorum Christianorum Orientalium series, tho. But it would be nice to have the whole manuscript online.

Severus' works are often important for quotations of biblical and other patristic materials.

How can I get some photos of Codex Psi? I understand Kirsopp Lake took photos of all the gospels and put them in one of the libraries.

Can anyone get hold of these, and post them online while we are waiting for newer ones?