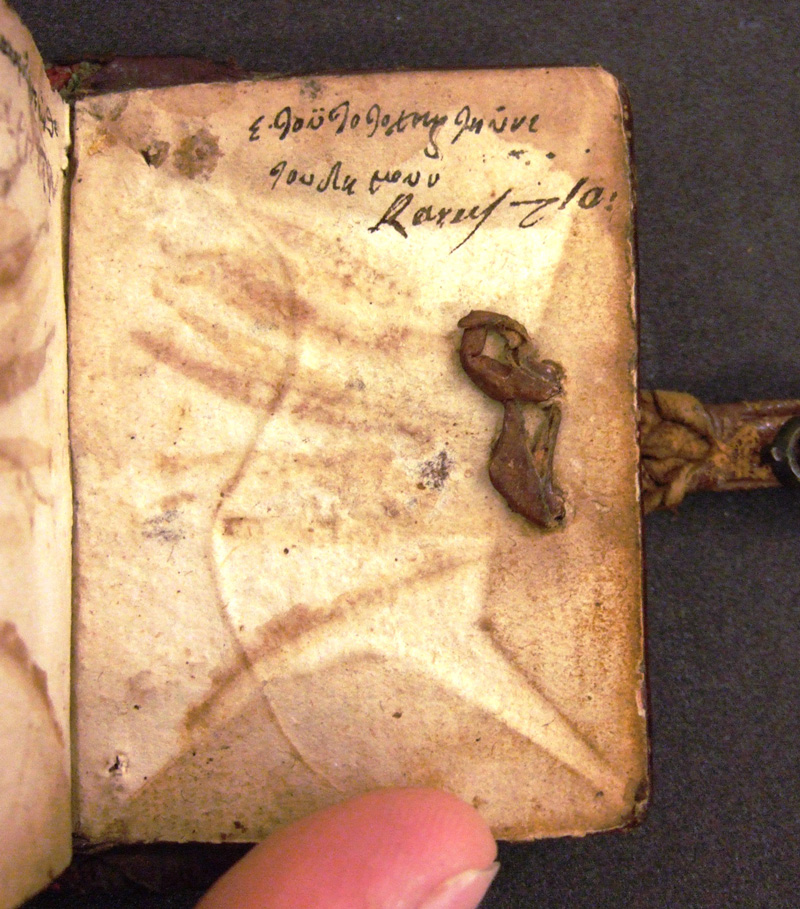 A paste-down backboard from a 13th-century Psalter, showing a mark from the manuscript's original leather strap, Add MS 11835.

This very interesting little book, containing the Psalms and most of the Divine Office, might be one of my favourite Greek manuscripts. While there are many ways of looking at such a manuscript, as an experienced conservator, the reason why I have chosen this manuscript is because of its physical features which are closely related to its history. 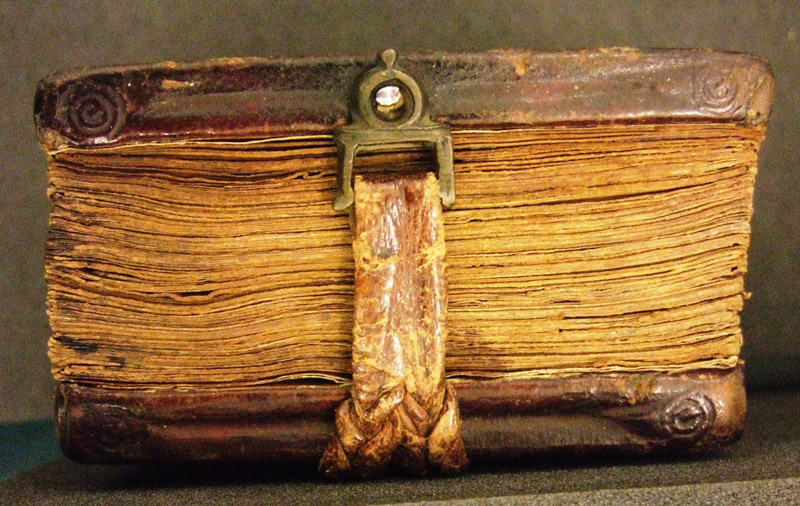 The fore-edge of a 13th-century Psalter, with a metal (brass) pin and clasp with leather strap, Add MS 11835.

One obvious striking feature of this manuscript is its size: it measures a mere 93mm in length, 74mm in width, and 34mm in thickness – ideal to be carried around by a monk in his daily prayers. Today, the book is housed in a beautiful 20th century box manufactured in the shape of a western-style book, at the British Library. The manuscript itself, however, is still bound in its original Byzantine binding, displaying typical characteristics of this style – 'link-stitch' sewing, a back with no visible supports, wooden boards with the distinguishing V-shaped edges etc.

We know by looking at the writing that it was probably copied in the 13th century. A note on f.21v tells us that it must have belonged to the library of St. Catherine's Monastery in Sinai, Egypt, during the 17th and 18th centuries. The front and the back boards of the box bear the emblem of the Bibliotheca Butleriana, an important collection of which the manuscript was part of, before coming to the British Library. 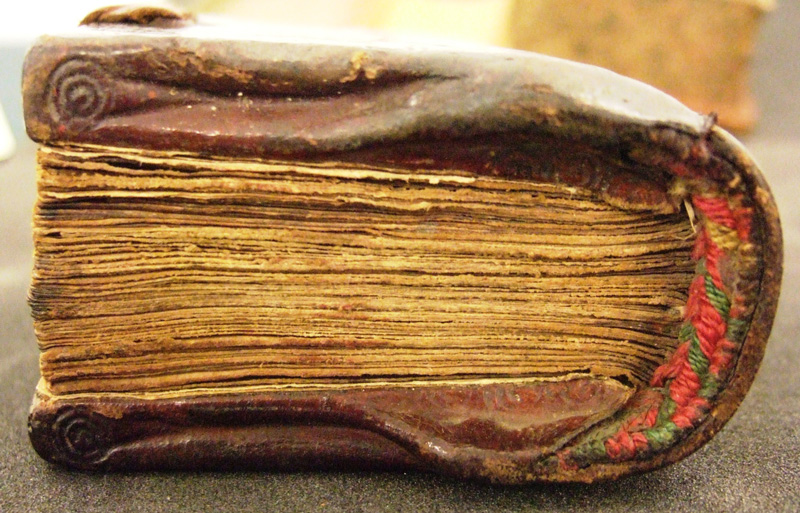 Head-edge of the manuscript, showing “V” shaped edges of the boards and head-end band, Add MS 11835.

It is, however, the small physical details that disclose many more information about its rich history. A simple stain on the inside back board, for example, is the mark left by a previous leather strap. The original leather strap broke and was replaced by another, the latter made of one double strip of leather, is split in two instead been split in three as it was originally and so one of the lacing holes in the front cover was therefore left empty after the repair. I am particularly excited by the potential for new discoveries and observations to be made once images of this manuscript and many others like it are made available online. Are there, for example, other surviving manuscripts that bear the marks of the same tools, used to decorate the leather cover and could therefore lead us to the workshop that produced this manuscript? Similar comparisons on the threads used for the end bands or the style of decoration of the brass clasp might help us to better understand the origins of this wonderful book. 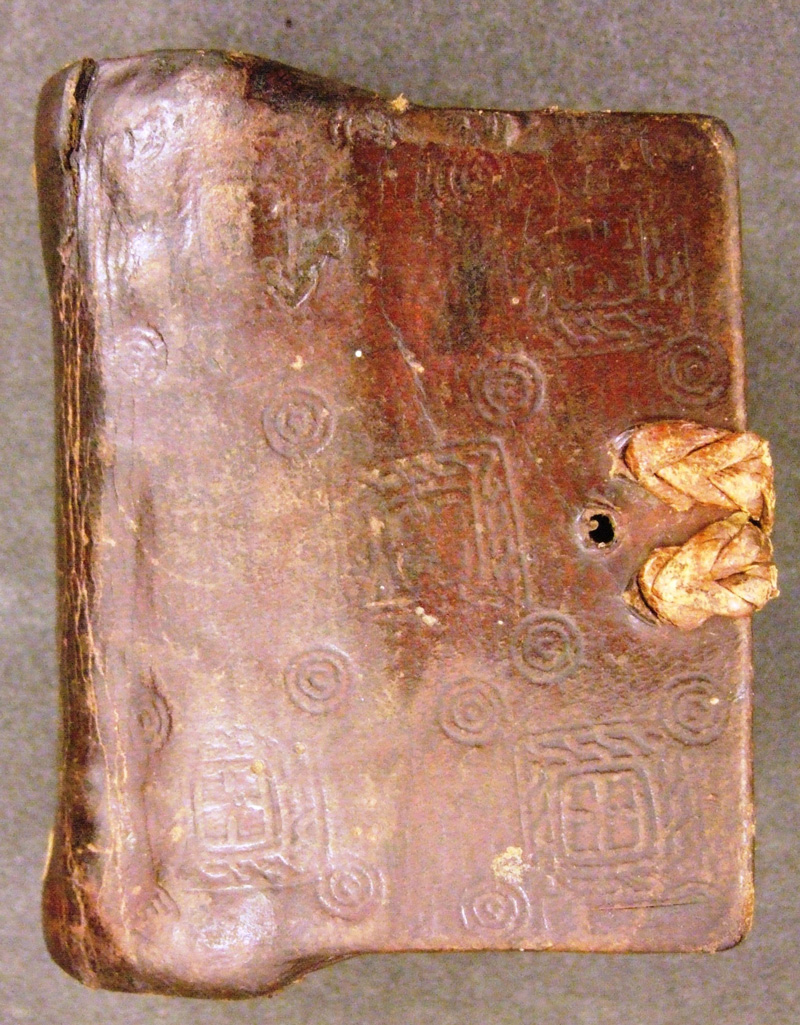 The back-board of a 13th-century Psalter, with lacing of the leather straps with unused hole, Add MS 11835.

Building a digital resource requires a great deal of team work and collaboration. The frontline teams contributing to the Greek Manuscripts Digitisation Project, for example, include experts in the preservation and conservation of manuscripts, digital photography, digital preservation, development of information systems, website design, development and usability, project management and, of course, Greek manuscripts. Each of these teams make a critical contribution to the final output. From a Project Manager's point of view, I find it most inspiring how conversations with colleagues and friends, both inside the British Library, help me to see a different perspective on the many issues relating to the resource we are about to create.

I have asked a number of people to guest blog in the Digitised Manuscripts Blog and hope that readers find their contribution as interesting as I do. The next blog entry was written by Flavio Marzo, who has been working as  Conservator for the Greek Manuscripts Digitisaton Project since March 2009.