The British Library recently hosted a visit by a team from the University of Southampton, who specialise in polynomial texture mapping. In simple terms, the team takes multiple images of a single object, to gather the reflectance properties of its surface. The images can then be meshed together, allowing you to illuminate the object as if a torch was being shone upon it.

This technique has multiple applications. The Southampton team has already used it to capture images of cuneiform tablets, and of graffiti from Pompeii. At the British Library, we experimented by taking images of collection items which can be notoriously difficult to photograph, and are often hard to decipher, such as medieval wax seals and early modern bookbindings.

In this video clip, Hembo Pagi demonstrates how the technology can be used to view a seal of David II, king of Scots (1329-1371). The seal in question formed part of the library of Sir Robert Cotton (d. 1631), one of the foundation collections of the British Museum (and hence the British Library).

This technology is currently being showcased at the British Library's Growing Knowledge exhibition. More information on polynomial texture mapping is available on the University of Southampton's website.

Posted by Ancient, Medieval, and Early Modern Manuscripts at 4:48 PM

Cartularies are one of our best sources for life in the Middle Ages. Typically compiled by religious communities, secular corporations or wealthy families, the books in question contain copies of charters and related documents, supplying evidence of landholding, legal transactions and day-to-day business. Approximately 2,000 medieval cartularies have survived from England, Ireland, Scotland and Wales, dating from the eleventh to the sixteenth centuries. A full listing is provided in the recently-published Medieval Cartularies of Great Britain and Ireland, recording for each volume its current and previous ownership, editions, calendars and copies, and other bibliographical information. 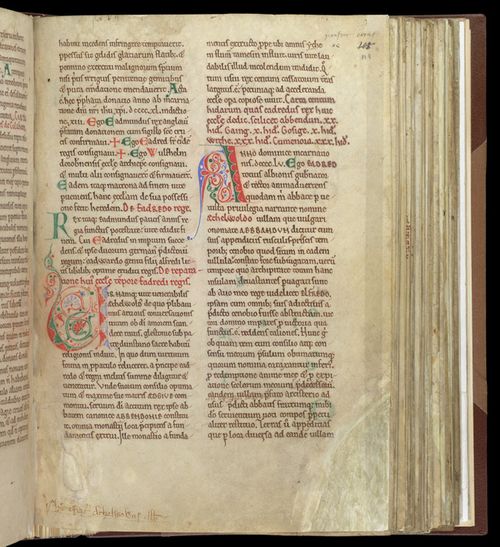 Some of these cartularies have been acquired in recent years by the British Library. The so-called “Liber de Hyda”, from Hyde Abbey, was purchased in 2007 (Add MS 82931), and includes copies of twenty-three Anglo-Saxon charters and seven wills. Among these are the only two known wills of Anglo-Saxon kings, namely Alfred the Great (871–899) and Eadred (946–955); that for King Eadred survives uniquely in this manuscript. 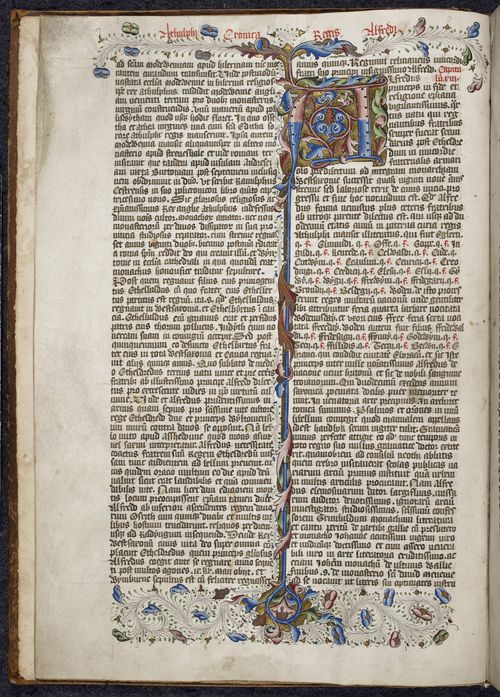 It’s often fascinating to learn how certain cartularies were preserved until the present-day. From the Augustinian priory of St Mary Overy, Southwark, we have four leaves (BL Add. MS. 6040) recovered from a group of children in the 18th century, who were using them to cover their drums. The cartulary of Buckfast Abbey, meanwhile, came into the possession of James Pearse, a waste-paper merchant from Exeter, who fortunately didn’t treat it as “waste”. One would also be intrigued to know more about Christopher Wells, who in 1559 wrote a note with his foot in a register from the abbey of Bury St Edmunds (BL Add. MS. 14850)!

The new edition of Medieval Cartularies can be purchased online from the British Library shop. 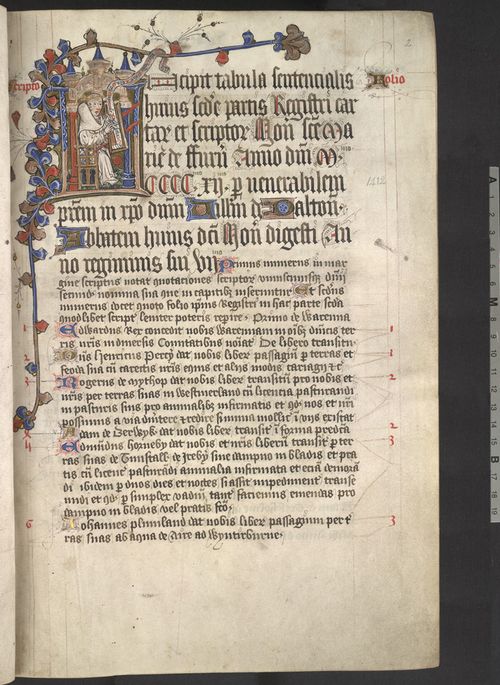 Posted by Ancient, Medieval, and Early Modern Manuscripts at 11:51 AM

The Catalogue of Illuminated Manuscripts contains descriptions and images of the most lavishly illustrated and decorated manuscripts in the British Library's collections.  But for the purposes of our catalogue 'illuminated' is applied in its widest sense, so that not only manuscripts with gold and silver decoration, or those containing exquisite miniatures, are included.  In addition, manuscripts with lesser decoration, some with initials in colours, but which contain interesting texts or script, are in the catalogue and in some cases images will be added later as they become available.

Here are two examples from the Royal collection: 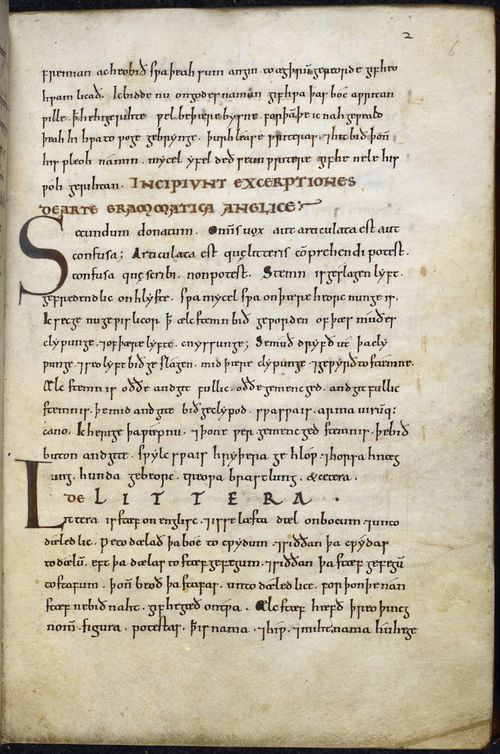 Text page with large initials and Latin and Anglo-Saxon script, from Ælfric's Grammar, England, second half of the 11th century, Royal MS 15 B XXII, f. 2

This manuscript of Ælfric's Grammar dates from the second half of the 11th century, the late Old English period, and is copied in a clear, concise script, which clearly distinguishes the two languages.  The Old English text is written in Anglo-Saxon round minuscule and has insular letter forms like þ and ð while the Latin is copied in English Caroline minuscule with horizontal feet on the minims, characteristic of English style.  Metallic red initials and red rustic capital titles are the only decoration.

Ælfric of Eynsham, born in 950, was educated at the monastery of Winchester, where it is believed that a standardized written form of Old English was developed.  This manual, based on Priscian, was written circa 998, and is an introduction to Latin grammar for English students.  It is the first Latin grammar written in the English language and Ælfric used considerable skill to adapt the vernacular, in some cases coining new linguistic terminology for the purpose.  Latin terms, when used, are accompanied by their English equivalents; for example, 'tempus tid, modus gemet... numerus getel,' and the aim is to give simple, clear explanations of complex Latin grammatical concepts.

Royal 15 B xxii is believed to have been owned by Matthew Parker, Vice-Chancellor of Cambridge University and Archbishop of Canterbury in the 16th century, as it contains notes and markings in red pencil probably in his handwriting.  The 11th century text is incomplete, and the missing portions were supplied from another manuscript while in Parker's possession.

There are 6 manuscripts of Ælfric's grammar in the British Library, and they provide an insight into how medieval scholars viewed languages, particularly the English vernacular, in a period of linguistic upheaval brought about by the Norman Conquest. 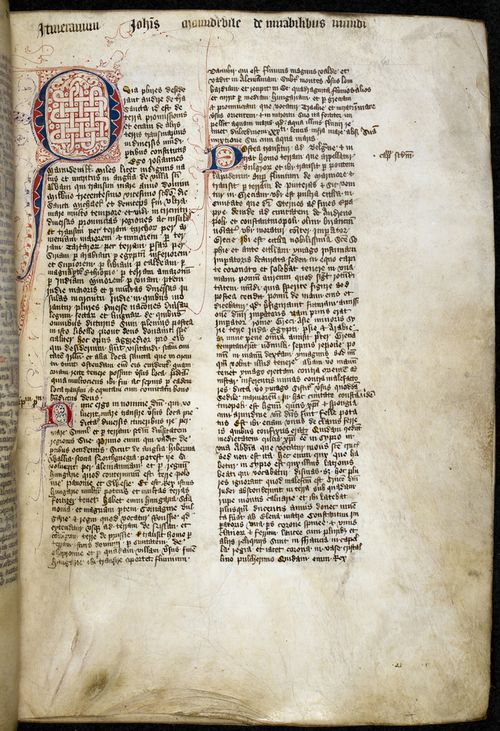 Puzzle initial 'Q' with lattice-work in-filling and decoration in the form of leaves, from a book of historical and geographical works, S. E. England, last decade of the 14th century to the first decade of the 15th century, Royal MS 13 E IX, f. 40

This manuscript contains an English collection of historical and geographical works in Latin and French compiled circa 1400.  I will focus on three texts, the first two of which are in Latin.

The 'Chronica Maiora' is a contemporary account of the reign of Richard II and the influence of John of Gaunt by Thomas Walsingham, who, as chronicler at St Albans Abbey, had unique access to the records kept there and was acquainted with the key players. The text in this manuscript is believed to have been copied by him or under his supervision in the late 1390s and provides a 'breaking news' version of events, including the Peasants' Revolt, from the perspective of the monks at St Albans.

Sir John Mandeville's Travels describes the travels of an English knight who left England around 1322 and journeyed throughout Egypt, Ethiopia, India, Persia and Turkey.  Though many of the geographical details are accurate, there are fantastical accounts of people with the bodies of humans but the heads of dogs, and of a tribe whose only means of sustenance was the smell of apples. The existence of a person by the name Mandeville, who claims in the preface to be from St Albans, is doubtful.

'Des Grantz Geanz', a short version of the verse history of early Britain from Albina to the reign of Brutus Greenshield, is in Anglo-Norman, the French dialect spoken and written in England after the Norman Conquest.  Albina and her sisters, set adrift by their father, the king of Greece, for the attempted murder of their husbands, land on an uninhabited island, which is then named Albion after the leading sister.  The sisters founded the giant race of Albion which is conquered by Brutus, who renames the land Britain.  The rest is history!

The hybrid gothic script combines the rounded loops and long 'r' of English cursive handwriting of the period with a more formal gothic aspect.  The puzzle initial at the head of the page contains lattice-work and foliate decoration in the English style and there are numerous smaller decorated initials in red or blue.  Copied at St Albans, this large volume entered the Royal library during the reign of Henry VIII, along with numerous works expropriated in the Dissolution of the monasteries.

In 1757 King George II presented the approximately 2,000 manuscripts of the royal library to the recently founded British Museum.  These manuscripts, collected by the kings and queens of England from the 9th to the 16th centuries, form the unique collection held by the British Library, known simply as 'Royal.'  The Royal Collection preserves the medieval and Renaissance libraries of the kings and queens of England, and includes within these illuminated manuscripts most of the surviving medieval paintings owned by them.

From 11 November to 11 March 2012, approximately 150 Royal manuscripts will be featured in a major exhibition at the British Library.  The research for this exhibition has been funded by a grant from the Arts and Humanities Research Council.  The research team is headed by Dr Scot McKendrick, Head of History and Classics, the British Library, and Professor John Lowden, Courtauld Institute of Art, University of London.

As part of this project the British Library will hold an international conference in December 2011 to encourage collaboration on these manuscripts and discussion of contextual issues of power, stylistic influence, political motivations and rivalries with Europe, public and private devotion, education and knowledge, and artistic production in a variety of media.

Scholars from all disciplines are invited to submit proposals for twenty-minute papers.  We hope to have sessions on the historical context and formation of the Royal collection, conservation and preservation issues, buildings and royal palaces, and inventories and medieval libraries, in addition to papers devoted to illuminated manuscripts in the Royal collection.  Papers that treat renowned Royal manuscripts and those focusing on lesser-known manuscripts are equally welcome.  The conference proceedings will be published by British Library Publications.

If you would like to take part, please send a short abstract and a concise CV by 31 May 2011 to Dr Kathleen Doyle, Curator of Illuminated Manuscripts, kathleen.doyle@bl.uk, or The British Library, 96 Euston Road, London, NW1 2DB.

Posted by Ancient, Medieval, and Early Modern Manuscripts at 4:37 PM

A Calendar Page for March

For a further discussion of medieval calendars, as well as the Isabella Breviary itself, please see the post for January. 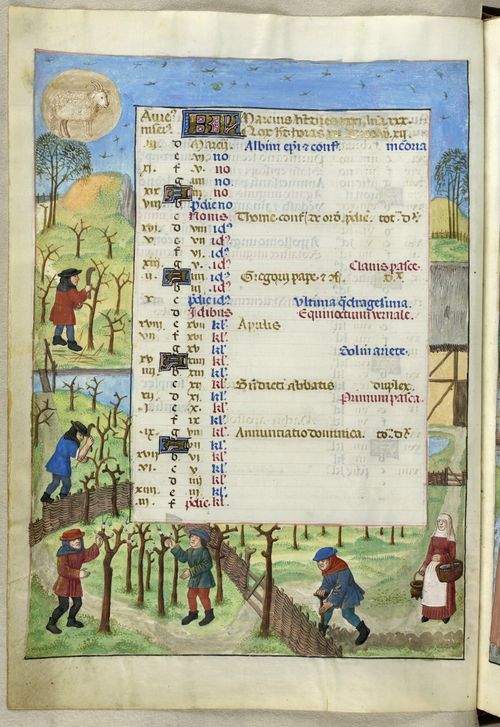 The calendar page for March, from the Breviary of Queen Isabella of Castile, Add MS 18851, f. 2v

This page is from the calendar for March, and depicts the zodiac sign for Aries as a ram with curled horns, in the upper left of the folio.  Below is a landscape at the beginning of spring, with trees sprouting new leaves, and grass beginning to grow.  Among the new greenery can be seen a group of men at work trimming and preparing vines, and beginning to dig for the year's first crops.