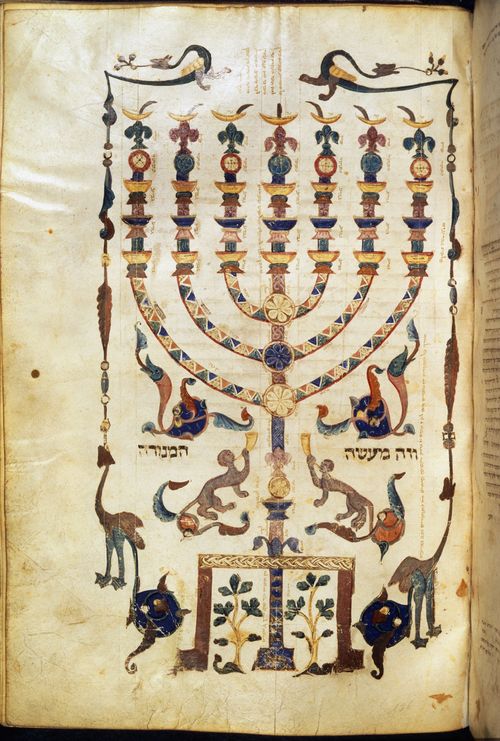 Full-page miniature of the Menorah, surrounded by foliate scrolls inhabited by hybrids, at the end of the Pentateuch, from a Bible with masorah and parva, Italy (Rome?), first half of the 13th century, Harley MS 5710, f. 136

You can now read more about this project in our post Hebrew Illuminated Manuscripts Online.

A significant nine-month externally-funded project involving the cataloguing and partial digitisation of 109 beautifully illuminated and decorated manuscripts from the British Library's Hebrew collection is nearing completion, and will soon be incorporated in the Library's Catalogue of Illuminated Manuscripts.  The majority of these splendid medieval Hebrew manuscripts were created in Europe (in such countries as France, Germany, Italy, Spain, and Portugal) before 1500.  Also included in the project are twelve medieval manuscripts originating from Islamic lands, such as Iraq and Yemen, as well as two 18th century finely illustrated Passover liturgies.

The online catalogue entries for these Hebrew illuminated manuscripts will include detailed bibliographic records and will be accompanied by hundreds of digital images.  This update will go live on the Catalogue of Illuminated Manuscripts on June 28th of this year.

It is anticipated that three very important medieval Passover liturgies - the Sister Haggadot, Brother Haggodot, and Hispano-Moresque Haggadot - may be fully digitised as well. 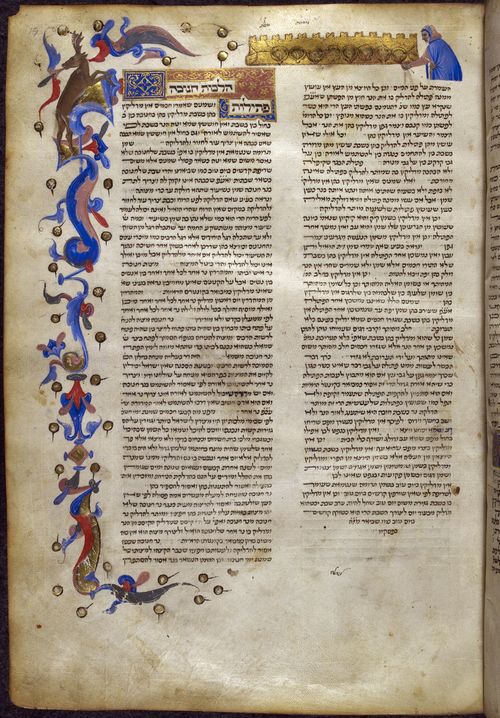 Decorated initial-word panel with a marginal illumination of a man lighting the Hanukkah lamp, from the Decisions of Isaiah of Trani the Younger (Pisqei Rabbi Yesha'yah Aharon), Italy (Perugia), 1374, Or 5024, f. 19

It may seem strange but I would like to say Thank You..

I am happy to see this.