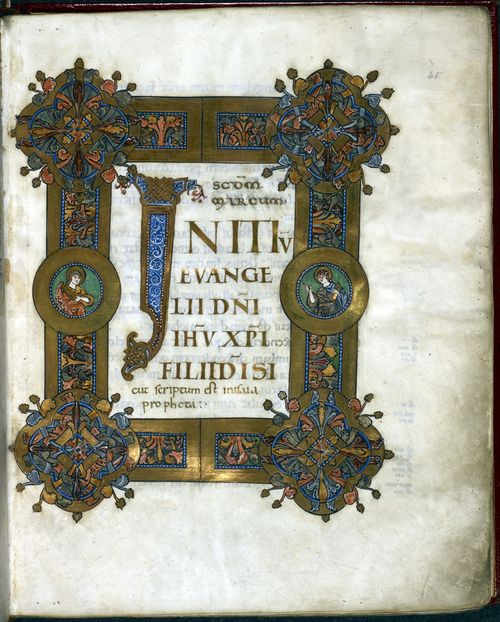 From an early period, books containing only the Four Gospels were among the most common of biblical texts.  Many deluxe copies feature elaborate full-page decoration at the beginning of each Gospel, often, as here, illuminated with gold.  This elegant copy also has gold initials at the beginning of each biblical verse.  The border surrounding the beginning of Mark features lush stylized leaves characteristic of late Anglo-Saxon decoration (compare Cotton MS Vespasian A VIII), with embedded roundels of saints.  The saint on the right holds a golden book, perhaps analagous to the type of jewelled or precious cover that might originally have been affixed to this copy of the Gospels.

This manuscript belonged to Christ Church, Canterbury from an early date, and may have been created there.  It is now known as the Cnut Gospels because of an added text in Old English that names Cnut, King of England (r. 1016-1035) and his brother Harold as ‘brothers’ of the monastery. On the page opposite the beginning of Mark’s Gospel another inscription confirmed the religious community’s liberties, also naming the King.  Perhaps Cnut paid for this deluxe copy of the Gospels and presented it to the community: the first inscription is written as if Cnut was speaking: ‘I myself took the charters... and laid them on Christ’s own altar’.  However, there is no mention of a donation of this book, which might be expected if it was a gift from the King.

Despite its strong royal associations, this book entered the Old Royal Library only at the beginning of the seventeenth century, when Henry Frederick, Prince of Wales (d. 1612), the eldest son of James I, acquired the library of John, 1st Baron Lumley (b. c. 1533, d. 1609).