As we look forward to our Royal exhibition, which opens on 11 November 2011, we are going to showcase highlights of the British Library's spectacular collections.  This week we take a peek at a lavish Anglo-Saxon charter. 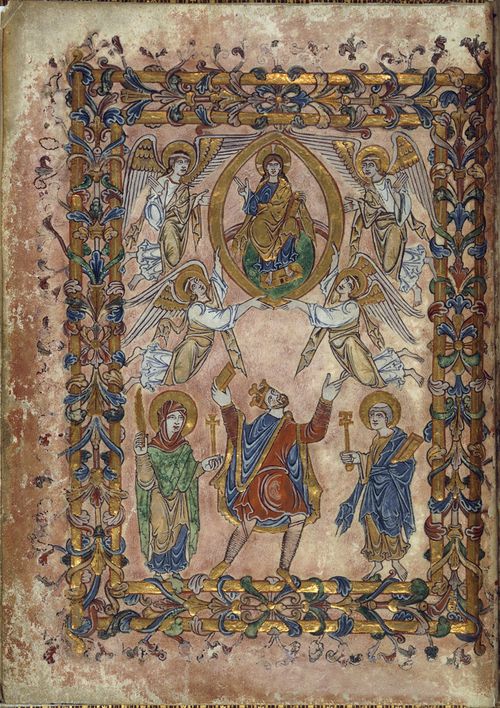 King Edgar (d. 975), king of all of England from 959, was an ecclesiastical reformer, appointing bishops who imposed the Benedictine rule on monastic communities such as the one at New Minster, Winchester.  This charter (Cotton MS Vespasian A VIII), in the unusual format of a book rather than a single sheet of parchment, commemorates the introduction of Benedict's Rule at New Minster in 964.  The manuscript was completed two years later, and is written entirely in gold — the only known such example from the late Anglo-Saxon era.  Its importance is further indicated by the large full-page miniature of the King at the beginning of the book.

In the miniature, surrounded by a typically lavish Anglo-Saxon border, Edgar holds a book, presumably this very charter. He offers it to Christ above, who is seated on a rainbow in glory, being held aloft by angels.  Flanking Edgar are the two patron saints of the abbey, the Virgin Mary and St Peter (who are also pictured with King Cnut and Queen Emma in the Winchester Liber vitae (Stowe 944).  The King’s relationship to Christ is made explicit by an inscription on the page facing the image: ‘Thus he who established the stars sits on a lofty throne. King Edgar, prostrate and venerating, adores him.’ Through its text, decoration and imagery, this manuscript illustrates the importance of the King’s patronage, but also the limitations of his power.

Posted by Ancient, Medieval, and Early Modern Manuscripts at 10:56 AM