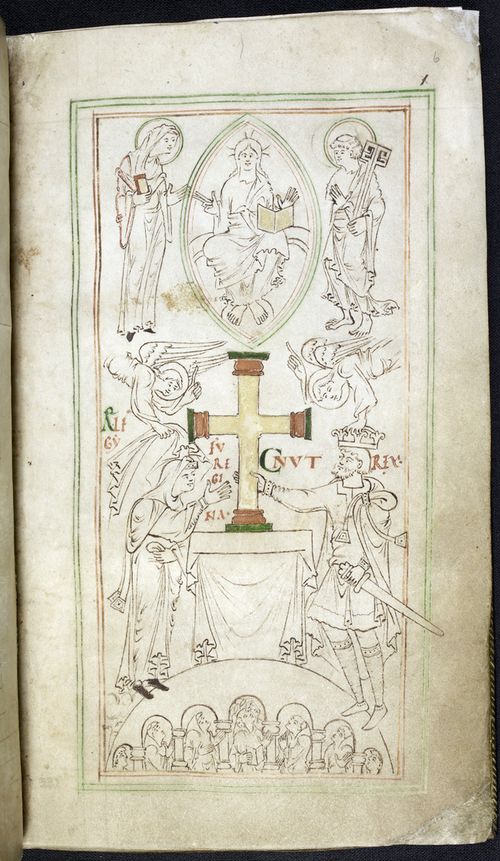 King Cnut and Queen Emma presenting a cross to the altar of the New Minster, Winchester, Stowe MS 944, f. 6

The image at the beginning of this book is a record of a real event:  King Cnut (d. 1035) and his queen Emma of Normandy (Ælfgifu) (d. 1052), the widow of Ethelred the Unready (Æthelræd Unræd), presenting a cross to the church of New Minster, Winchester. The cross itself was lost in the 12th century, but this near-contemporary account of its gift remains. However, the image is meant to be more than just a simple record of these royal donors making a royal donation — Cnut and Emma are also shown occupying a place of particular importance in the spiritual realm. Above the King and Queen are the patron saints of New Minster, the Virgin Mary and St Peter, with his ident. Between them angels present Emma with a veil and Cnut with a crown. The central figure of the image is the risen Christ, directly above the cross, holding an open book, presumably the book of life.

The earthy hierarchy is also depicted: below the King and Queen are the monks of New Minster. The central monk holds an open book, probably this book itself, also a book of life (Liber vitae), so-called because it includes within it a list of monks of the community, so that ‘by making a record on earth in written form, [those named] may be inscribed into the pages of the heavenly’. The first names in the book, however, are not the monks, but King and Queen themselves. Their identities are also made clear by the inscription of their names next to their portraits: ‘Ælfgifu regina’ (Queen Emma) and ‘Cnut rex’ (King Cnut).

Why is the queen identified as "Emma" when her name is clearly written as Aelfgyfu, Cnut's furst wife?

Thanks for your comment. Emma went by the name Ælfgifu while she was in England. You can see this in contemporary documents, such as Stowe Ch 38. Oddly enough, her first husband Æthelred’s first wife was also called Ælfgifu.
Best wishes, BLMedieval