One of the British Library's medieval literary treasures is the 14th century manuscript which contains the unique copies of the poems Pearl, Cleanness, Patience, and Sir Gawain and the Green Knight. Tune in to BBC Radio 4 this Sunday, 10 July, at 16.30, for a documentary focusing on Pearl, presented by Julian May, and featuring the original manuscript.

Pearl is the tale of the poet's recently-deceased daughter, who appears to him in a dream, and offers him comfort in his time of mourning. The poem is preceded by a number of full-page miniatures, depicting the poet and Pearl standing on opposite sides of a river. The identity of the poet remains open to question, but he was a contemporary of his more famous counterpart, Geoffrey Chaucer (d. 1400). 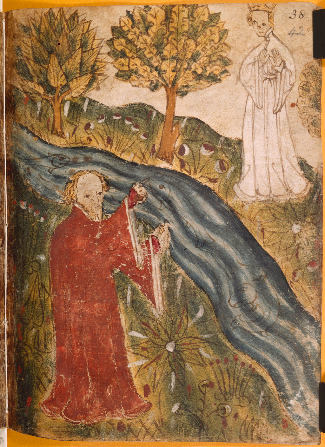 The manuscript forms part of the Cotton collection at the British Library, having belonged to the Parliamentarian and antiquarian scholar Sir Robert Cotton (d. 1631), who kept his books in presses named after the Roman emperors. The Pearl-manuscript is consequently known as Cotton MS Nero A X, after the arrangement devised by its 17th century owner. All four poems have been copied into the manuscript by a single scribe, with the illustrations having been added one or more decades later.

If you miss the programme, you can listen again on the BBC iPlayer.

Posted by Ancient, Medieval, and Early Modern Manuscripts at 2:08 PM

If you enjoy this, how much more will you enjoy hearing it read aloud by Marie Borroff, Sterling Professor of English Emerita at Yale, who has translated the poem. Visit:
http://www.borroffreadinggawain.com/