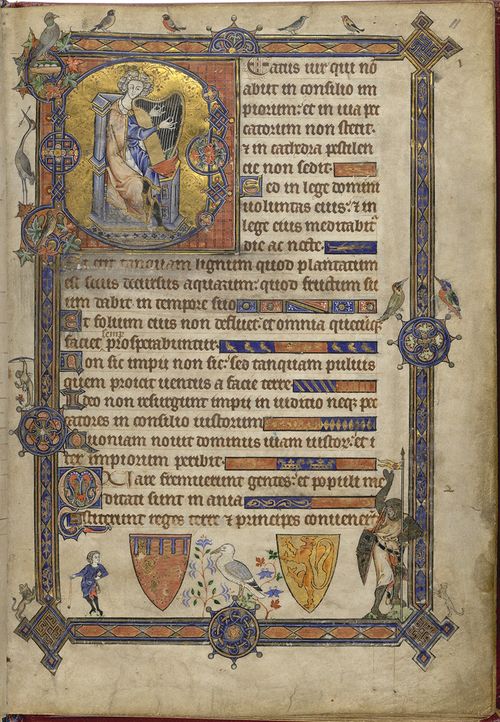 Historiated initial 'B'(eatus) of King David playing the harp, with a bas-de-page scene of David and Goliath, and a full bar border, Add MS 24686, f. 11

Like the Westminster Psalter, the beginning of Psalms in the Alphonso Psalter is illustrated by an image of a crowned King David harping.  Here, however, the image has been placed inside the first letter of the text ‘B’(eatus) (blessed).  This type of ‘historiated initial’ is characteristic of English illuminated manuscripts of the twelfth and thirteenth centuries.  Also characteristic of the later thirteenth century is the solid ‘bar’ border enclosing the text, which is inhabited by interesting scenes and creatures.  On this page birds perch around the edges, while in the lower margin David prepares to launch his slingshot against a heavily armed and giant Goliath.

The arms in the centre of the lower margin identify the intended recipient of this copy of the Psalms as Prince Alphonso (b. 1273, d. 1284), the second son and heir apparent of Edward I (1272-1307) and Eleanor of Castile, named after his grandfather Alfonso X of Castile and León.  The arms of England, on the left, are coupled with those of Holland and Zeeland representing Margaret, daughter of Florent V, Count of Holland and Zeeland, to whom Alphonso was betrothed in 1284.  Unfortunately, the young Prince died a few months before the wedding was scheduled to take place; the decoration of this opulent Psalter was left unfinished as a result.  It was completed a decade later in 1297, when Alphonso’s sister Elizabeth married John I of Holland and Zeeland, the brother of Alphonso’s intended bride, making the pairing of arms and the Psalter again appropriate for a royal wedding.

Posted by Ancient, Medieval, and Early Modern Manuscripts at 9:00 PM