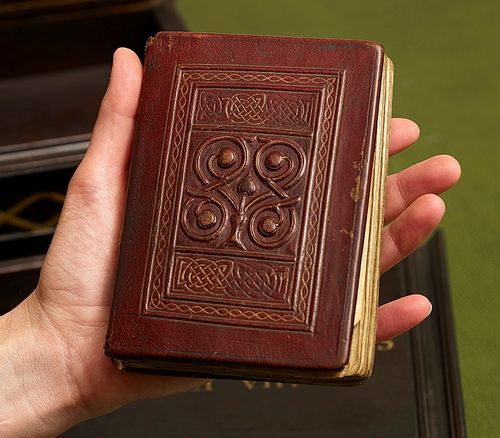 The British Library has today announced an ambitious fundraising campaign to acquire the St Cuthbert Gospel for the nation. Created in the 7th century and intimately associated with one of Britain’s foremost saints, the Gospel is the earliest surviving intact European book and one of the world’s most significant books.

A manuscript copy of the Gospel of St John, the St Cuthbert Gospel was produced in the North of England in the late 7th century and was buried alongside St Cuthbert on Lindisfarne, apparently in 698, and later found in the saint’s coffin at Durham Cathedral in 1104.  It has a beautifully-worked, original, red leather binding in excellent condition, and is the only surviving high-status manuscript from this crucial period in British history to retain its original appearance, both inside and out.

The National Heritage Memorial Fund has made a major grant of £4.5 million towards the fundraising campaign, the largest single grant for a heritage acquisition in the British Library’s history and a huge boost to the campaign to acquire the Gospel. The Art Fund has also generously pledged £250,000 and a similar sum was donated by The Garfield Weston Foundation in recognition of the importance of the book to Britain. The Library is now in discussion with a range of other major donors with a view to securing the remainder of the funding required, by the deadline of 31 March 2012. Read the full press release here.

UPDATE (17 April 2012): The St Cuthbert Gospel has now been acquired by the British Library, following a successful fundraising appeal. Thank you to all our supporters for making this possible.

Posted by Ancient, Medieval, and Early Modern Manuscripts at 1:32 PM

I think the people who pay for the upkeep of Bamburgh Castle might be interested too? Given the historical link between St. Cuthbert and Henry - was it I?

I cannot find in the available information whether the pages are parchment or some other material?

I am overwhelmed to sit and read this on the internet. What an utterly magical experience. I could sit all night but I will come and come again. Thank you for this transcending opportunity.

I keep reading that the manuscript has been digitalized and is avilable, online. Yet, can not find where that is. Any help would be greatly appreciated. Thank you.