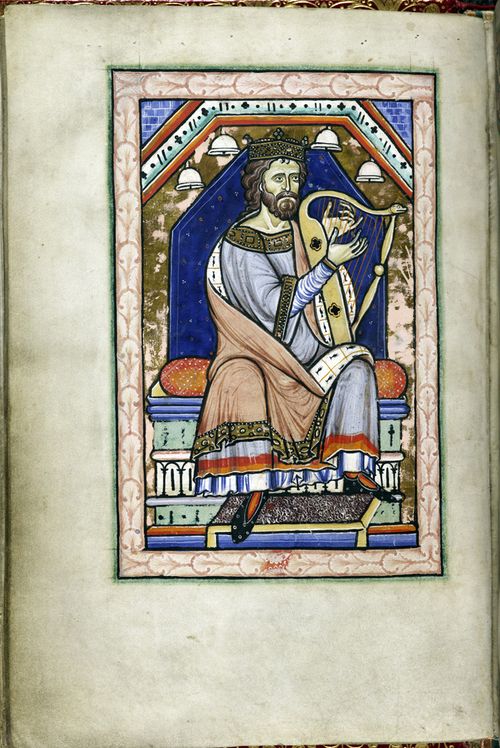 Miniature of King David playing the harp at the beginning of the Psalms, Royal MS 2 A XXII, f. 14v

From an early period the book of the Psalms formed the basis for monastic services as well as private devotion.  Copies of the book were often circulated separately from other books of the Bible, accompanied by calendars with saints’ days and other devotional material, collectively known as Psalters.  In the medieval period David was believed to be the author of the Psalms, and as a result decorated Psalters typically include images of significant events in his life.  The usual illustration to the beginning of the Psalms is an image of David as king and musician holding a harp, indicating both his authorship and the nature of Psalms as songs.

This is seen in the famous Westminster Psalter (so-called because it is associated with Westminster abbey). It may have been commissioned by one of its abbots at the beginning of the thirteenth century, to judge by the style of its decoration, which constitutes some of the most elegant and refined painting of the period.  The name of the artist who created these images is not known, but he was probably an itinerant layman rather than a monk.  Prayers added in the fourteenth and fifteenth centuries and a reference to the Psalter in a fourteenth-century inventory attest to its continued use at the abbey.