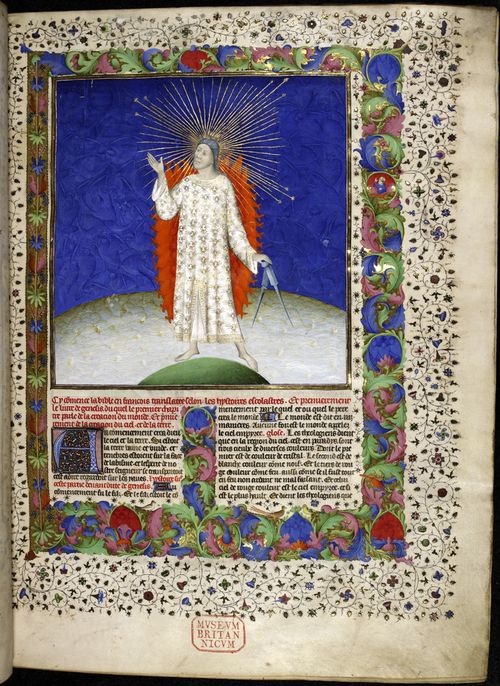 More than one hundred copies of the Bible historiale survive, many of which were illuminated by the finest artists of the period, befitting their status as deluxe, often royal, books.  Indeed, some scholars translate the title of the work as a ‘historiated’ (illustrated) Bible, rather than as a history Bible.  The text itself was somewhat mutable.  Originally only the historical books of the Bible, abridged versions of Job and Proverbs, and a combined Gospels were included.  However, in the fourteenth century other biblical texts were added to make the Bible historiale closer to a French version of the Vulgate.  The present manuscript is unique in that it includes several apocryphal stories such as a Life of Judas and of Pilate apparently translated by Guyart des Moulins, but not included in any other known copy of the text.

This volume was copied by an Augustinian friar, Thomas du Val, of Clairfontaine Abbey, in the diocese of Chartres, who records that he finished the work in 1411, although he did not indicate its intended recipient.  Given the extraordinary richness of its illumination, it would not be surprising if this was a royal book.  At the beginning of Genesis is a stunning image of God as Creator with a pair of dividers to measure the world.  Behind him the background in red and blue is revealed, on closer inspection to be made up entirely of angels.  This unusual image perhaps illustrates the commentary to the beginning of Genesis, which notes that there are three heavens of different colours: crystal, white and red.