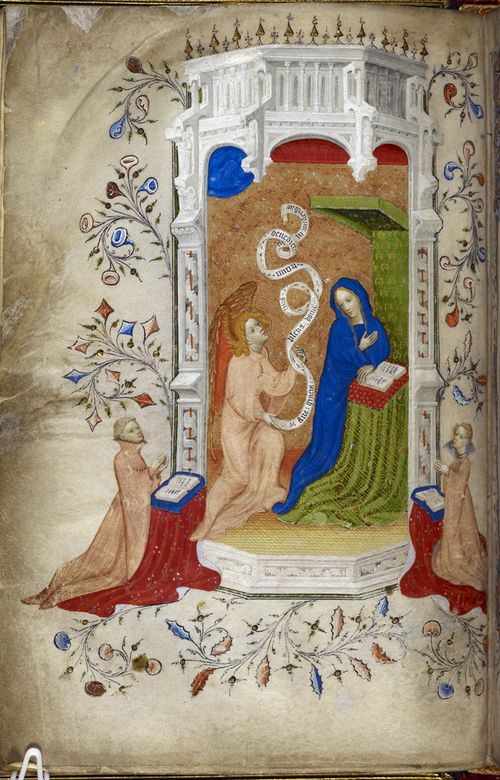 In the later Middle Ages the most popular type of devotional book was the Book of Hours, which contained a series of prayers to be recited at different hours of the day.  These hours or times corresponded to the hours for monastic services (Matins, Lauds, Prime, Terce, Sext, None, Vespers and Compline) and like those services included readings from the Psalms.  As in Psalters, the lay devotional book from the earlier period, Books of Hours also included calendars listing saints days and other holidays.  And like luxury copies of the Psalms, elaborate Books of Hours contained painted devotional images at each of the major divisions of the text, typically events in the life of Mary, as in the Annunciation pictured here at the beginning of Matins.

Additions of births and deaths of family members in the calendar of this Book of Hours allow it to be identified as the prayer book of the grandmother and mother of Henry VII, Margaret Beauchamp (b. 1405/6, d. 1482), and Lady Margaret Beaufort (b. 1443, d. 1509).  Margaret Beauchamp recorded the birth of her daughter Margaret, and the death of her second husband, John Beaufort, Duke of Somerset (d. 1444).  In turn, Margaret Beaufort noted the birth of her son Henry, the future Henry VII, together with other significant events in his life.  The images in the manuscript, including the Annunciation pictured, were recycled from another family prayerbook; it seems likely that the couple praying before the Virgin are John Beaufort, Earl of Somerset (d. 1410) and Margaret Holland (d. 1439), the great-grandparents of Henry VII.