The Hours of Elizabeth the Queen 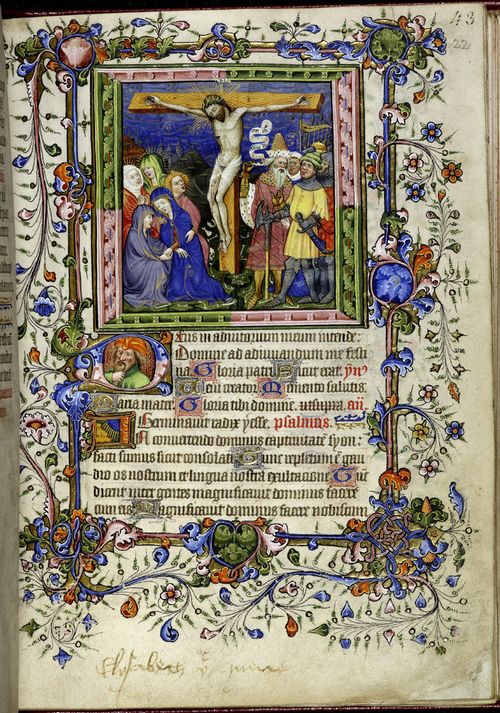 Miniature of the Crucifixion, with an inscription below reading 'Elisabeth the quene', Add MS 50001, f. 22

The Hours of Elizabeth the Queen has been described as the most lavish Book of Hours produced in fifteenth-century England. The text itself contains three sequences of Hours: the Hours of the Virgin and also the Hours of the Cross and of the Passion together with a number of other devotional texts.  The illustration is particularly lavish.  In addition to the full-page images before important textual divisions the book includes an astonishing 423 painted initials with narrative or decorative scenes.

The manuscript is known as the Hours of the Queen because of an inscription at the bottom of the pictured miniature of the Crucifixion: ‘Elisabeth the quene’.  This appears to be a signature of Elizabeth of York (d. 1503), daughter of Edward IV (1461-83) and wife of Henry VII (1485-1509).  However, the manuscript was not originally made for her.  Later in the volume (f. 152) is a prayer for the soul of Cecily or Cicely (d. 1450), Duchess of Warwick, and it is likely that the book was made for a member of her family, possibly her father, the powerful Richard Neville (b. 1400, d. 1460), 5th Earl of Salisbury, the nephew of Henry IV (1399-1413).  Thus this magnificent book was deemed important enough to have been passed to important members of English aristocracy, in this case, ultimately the daughter, wife, and mother of successive kings of England.