Don't miss this opportunity to buy the British Library's Royal App, on special offer until 11 November. 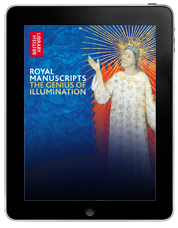 The App features 58 stunning medieval and Renaissance manuscripts from our exhibition Royal Manuscripts: The Genius of Illumination (11 November 2011-13 March 2012). It contains 500 high-resolution images of some of the best surviving examples of medieval painting in England. Six expert videos explain the history of items such as the Psalter of Henry VIII, commissioned and annotated by the king himself, and the Shrewsbury Book, presented to Margaret of Anjou on her marriage to Henry VI in 1445. You can see images of the Psalter of Henry VIII and the Shrewsbury Book in a previous post.

You can read more here about the British Library's Apps.

Posted by Ancient, Medieval, and Early Modern Manuscripts at 8:15 AM