Countdown to the Royal Opening 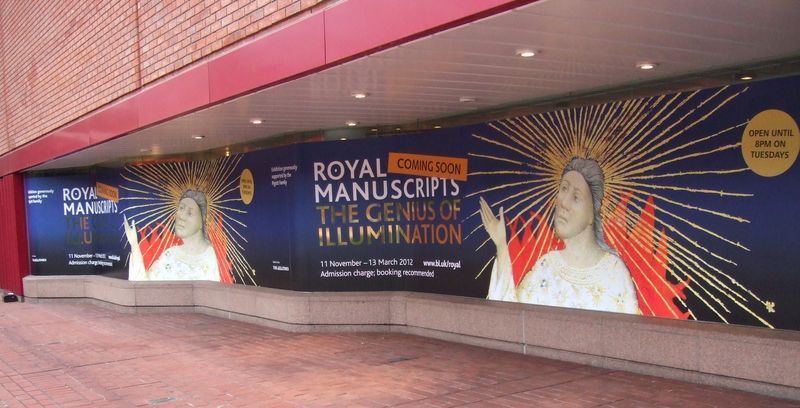 The opening of Royal Manuscripts: The Genius of Illumination is just days away! Her Majesty the Queen, accompanied by the Duke of Edinburgh, will officially open the exhibition next week; and visitors will be able to see this unprecedented display of Royal manuscripts from Friday, 11 November 2011, until Tuesday, 13 March 2012.

Tickets for the exhibition go on sale soon. You can find details here regarding ticket prices and exhibition opening hours. We encourage you to book your tickets in advance of your visit! A catalogue and guide to the manuscripts will be available from the British Library shop.

Don't forget that the Royal App can be purchased at a special discount until 11 November! You can read more about the App in Wired.

The installation of the exhibits is already underway. Alongside the British Library's sumptuous manuscripts will be exceptional loans from other institutions, all waiting to be unveiled to the public.

Several newspapers have recently published features on certain manuscripts that will be on display. The Daily Telegraph examined a fascinating medieval encyclopaedia known as Omne Bonum (All good things), focusing on its frank entries relating to the deadly sins of adultery and gluttony. The entry on Anglia (England), shown below, depicts a much more dignified personage, the king of England. The king of England sitting enthroned with a sword at the beginning of the entry on England, Royal 6 E. vi, f. 107.

Meanwhile, the Sunday Telegraph elaborated on two manuscripts containing ‘mirrors for princes’, texts providing guidance to kings (and future kings) on how they might rule both themselves and their kingdoms (‘Middle Ages illuminated as Royal manuscripts shine in new exhibition'). The first of these stunning books was commissioned for the young Edward III, shortly before he became king, and contains the Secretum secretorum (Secret of secrets), a text attributed in the Middle Ages to Aristotle, tutor of Alexander the Great. This story has since been picked up by the Daily Mail ('Might be worth a look, Wills: The medieval manuscripts that told England's monarchs how to be a king'). The second book contains an English ‘mirror for princes’, Thomas Hoccleve’s Regement of Princes, which he dedicated to the future Henry V. Evidently, it was common practice to provide guidance to young princes in medieval England, in anticipation of their ascending to the throne. Miniature of Prince Henry presenting the book to John Mowbray, 2nd duke of Norfolk, who kneels before him, Arundel 38, f. 37.

﻿Royal Manuscripts celebrates these and other manuscripts, some of the greatest surviving works of art from the Middle Ages.

Posted by Ancient, Medieval, and Early Modern Manuscripts at 10:27 AM