Some of you may have watched last night's Illuminations: The Private Lives of Medieval Kings on BBC Four. For those of you who missed the broadcast, fear not. The programme is available to UK users only on the BBC iPlayer, and will hopefully also be shown in other countries. 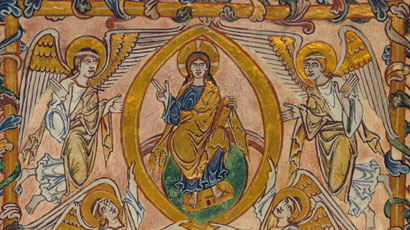 Yesterday's episode was entitled Ruling by the Book, and has been reviewed by Christopher Howse for The Daily Telegraph (Sins and secrets of the medieval kings, 10 January). Episode 2, What a King Should Know, will be broadcast first on Monday, 16 January, at 21.00 on BBC Four.

Posted by Ancient, Medieval, and Early Modern Manuscripts at 2:39 PM

Janina - that was excellent - I watched all three.
Brian
(Age 77)

Thank you for your really excellent 'Illuminations' series.It was what all documentaries should be - interesting, clear, well illustrated with relevant descriptions and information, and not filled with the usual confusion of images or art world gobbldigook!
Please come back soon with another series
It was also good to not have shots of,however attractive they may, your shoes, which did become a main element of your previous programmes! (sorry)

Keep up the good work