One That Got Away 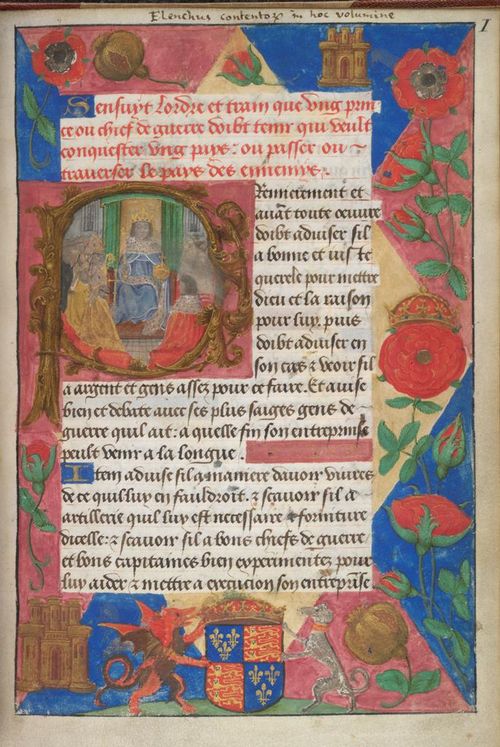 Our major exhibition, Royal Manuscripts: The Genius of Illumination (11 November 2011-13 March 2012), features many of the medieval and early modern manuscripts which entered the libraries of the kings and queens of England. Some of those books subsequently passed into the Royal collection at the British Library, but others went astray; and here is one such, a treatise on warfare made for King Henry VIII.

Henry's manuscript entered the British Library by a different route, since it ultimately passed into the collection of Sir Robert Cotton (d. 1631), and from his grandson Sir John Cotton (d. 1702) to the nation. It is a smallish volume, comprising just 23 leaves, and was decorated by a Flemish artist. The text itself is a curiosity. The manual on warfare was composed in the 1490s by Robert de Balsac, a French nobleman, for the express instruction of the king of France; but Henry VIII's copy was clearly made for the English monarch, most probably at a time when England was at war with France (c. 1511-1513). None of the French king's military tactics -- how to besiege a castle, how to engage in battle -- should have come as a complete surprise to Henry. 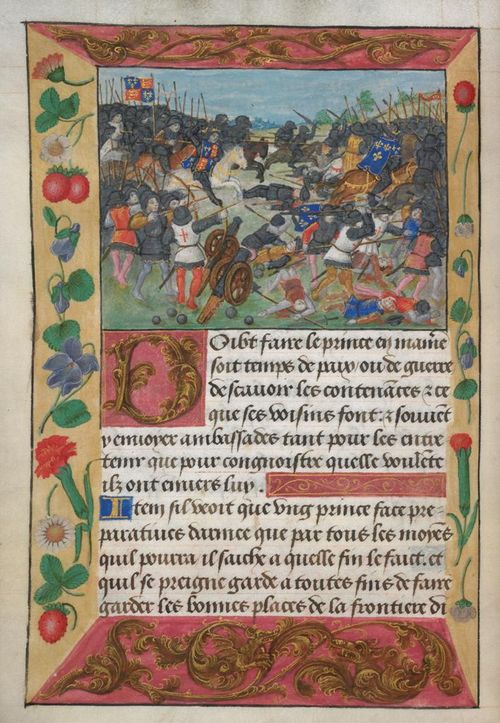 How do we know that this manuscript was made for the English king? On its opening page (f. 1r) are found the arms of England flanked by the Tudor supporters of a dragon and greyhound, and with the red Tudor rose and Queen Katherine of Aragon's pomegranate motif in the borders. Moreover, its final page has a rose bush, from which pomegranates also sprout (f. 23v). But perhaps this book's most distinctive feature is its miniatures depicting combat between English and French troops, with the English always having the upper hand. On f. 13v, for instance, is an illustration of a pitched battle, with what must be intended to be King Henry VIII mounted on a white charger, chasing the king of France accompanied by his fleeing army. In this and the other miniatures it is only French soldiers who are portrayed as being killed, a tacit nod to the desire for English supremacy on the battlefield. 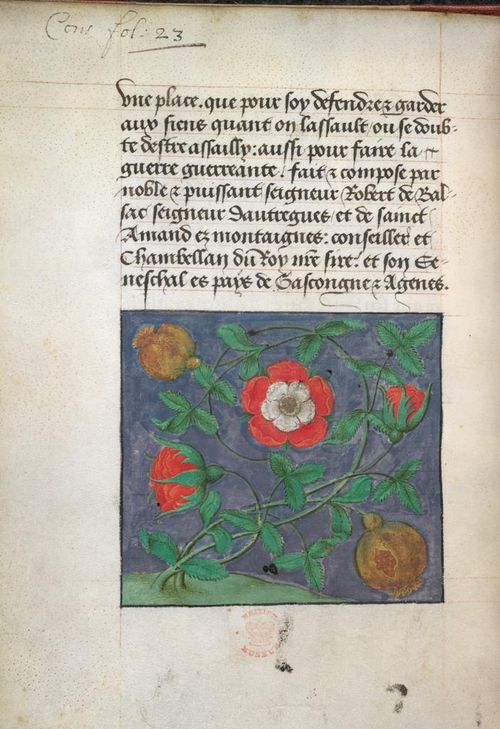 Just two manuscript-copies of this treatise are in existence, one at the Biblioteca Nacional in Madrid (lacking the epilogue, which declares the manual to be the work of Robert de Balsac) and the other at the British Library. It's possible that Henry VIII's manuscript was copied from the printed edition published at Lyons in 1502. From 15th-century France to 21st-century London, via the English royal court -- one of Henry VIII's prized possessions now at the British Library.