Regular users of the British Library will know that two online manuscripts catalogues are currently in operation. The new system has the catchy title SOCAM (Search Our Catalogue: Archives and Manuscripts), and now contains all the catalogue descriptions previously available online, plus those for manuscripts catalogued since 2009. We'd like to encourage you to start using SOCAM as soon as possible, because the old system, MOLCAT (Manuscripts Online Catalogue), will be switched off in autumn 2012.

SOCAM has many advantages over the old system, for both users and cataloguers. In particular, it has an enhanced search facility, hopefully making it easier for users to locate what they're looking for -- no mean feat when you consider that most medieval manuscripts lack title-pages and sometimes any indication of date or place of origin. From the cataloguers' perspective, there are now clear guidelines across the British Library as to which information should be recorded. Historically, different departments -- the India Office, Asian and African Studies, Photographs and so forth -- had different cataloguing standards, which have now been amalgamated for the benefit of our users. 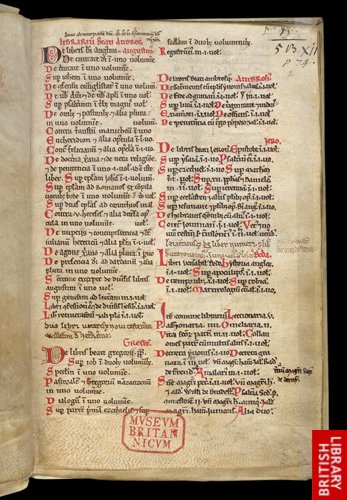 Followers of this blog may recall that cataloguing manuscripts isn't a modern phenomenon. In a post published in October 2011 (Beauty in the eye of the beholder), we drew your attention to a late 12th or early 13th century catalogue compiled for the Benedictine monks of Rochester Cathedral. Then as now, the need to know what was to be found in a given library, and what each manuscript contains, is paramount.

Posted by Ancient, Medieval, and Early Modern Manuscripts at 8:41 AM