What's Unique About the British Library?

Sitting on the train to work this morning, I started to ponder what makes the British Library unique. What do we have in our collections that can't be found elsewhere? Here's what I came up with (forgive the rotten poem, it is a Friday after all).

Shakespeare's only playscript, The Book of Thomas More,

And here, for good measure, is an image of King Henry VIII, just possibly singing Greensleeves to his court jester (who may be thinking to himself, "It goes from bad to verse"). 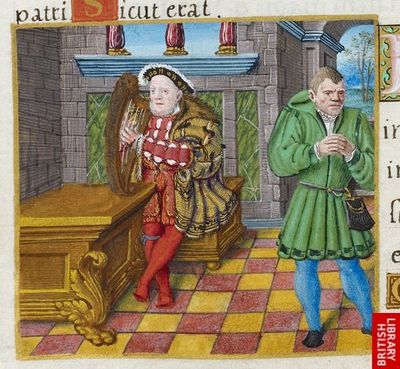 Detail of a miniature of Henry VIII as David and his court jester, William Somer, at the beginning of Psalm 52 (London, British Library, MS Royal 2 A. XVI, f. 63v).

The British Library is unique in so many ways.

I would be fascinated to see a list of items which only exist within our walls.