The British Library has acquired the St Cuthbert Gospel after the most successful fundraising campaign in the Library's history. Following a detailed conservation assessment, the manuscript has recently been fully digitised and you can now see it here on our Digitised Manuscripts site. The manuscript has been added to the Library's collections as Additional MS 89000. 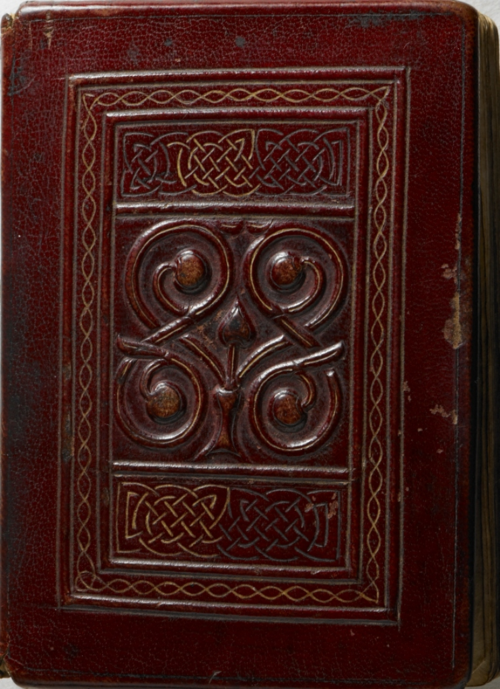 The front cover of the St Cuthbert Gospel, covered in leather dyed a deep crimson, and with a central motif containing a chalice from which stems project, terminating in a leaf or bud and four fruits (London, British Library, MS Additional 89000).

The Gospel, which is a manuscript copy of the Gospel of St John, is the earliest intact European book and is intimately associated with Cuthbert, one of Britain's foremost saints. It was created in the late 7th century in the north-east of England and placed in St Cuthbert's coffin, apparently in 698. It was discovered when the coffin was opened in Durham Cathedral in 1104 on the occasion of the removal of Cuthbert's body to a new shrine. The Gospel has a beautifully-worked, original, red leather binding in excellent condition, and is the only surviving high-status manuscript from this crucial period in British history to retain its original appearance, both inside and out. 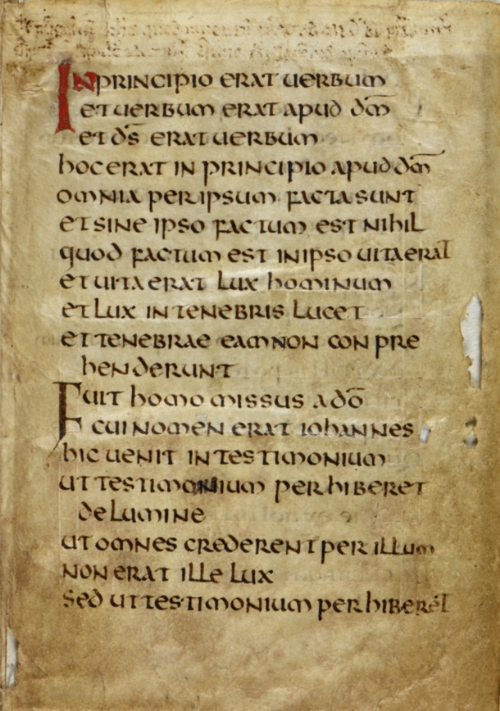 The opening page of the St Cuthbert Gospel, beginning with the text of the Gospel of St John, and with an erased 12th-century inscription in the upper margin recording the manuscript's discovery in 1104 (London, British Library, MS Additional 89000, f. 1r).

We are now taking the first steps to increase public awareness and understanding of the Gospel. Today a new display opens in the front hall of the British Library which runs until 17 June 2012. This display explores both the significance of the Gospel as a book and its association with St Cuthbert, as well as charting the many journeys that the book has made. The Gospel itself is on display in the Sir John Ritblat Treasures of the British Library Gallery, along with a 9th-century copy of Bede's Ecclesiastical History of the English People and a beautifully illuminated 12th-century copy of Bede's prose Life of St Cuthbert. In recent years the Gospel has been displayed closed to show the outstanding decorated cover. Following the recent conservation assessment, is now on display open for the first time in the Library's St Pancras building. Two pages of the text of St John's Gospel will be shown until the display in the Entrance Hall closes on 17 June. 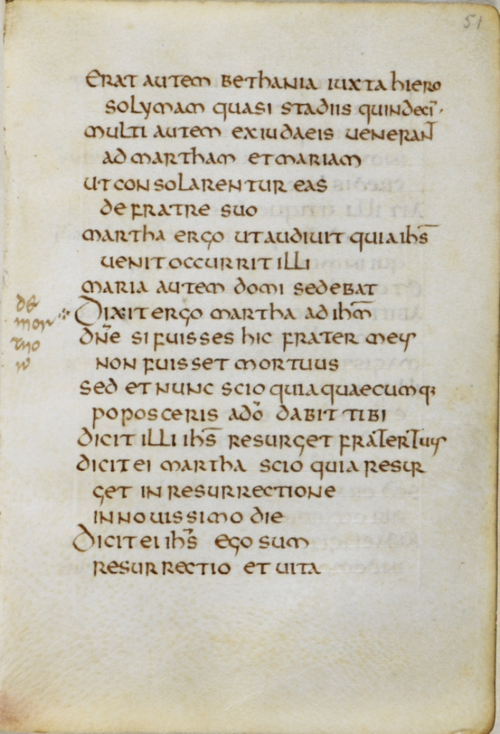 A page from the St Cuthbert Gospel relating part of the story of Lazarus, with a contemporary marginal note reading "de mortuorum", marking out a page to be read at masses for the dead (London, British Library, MS Additional 89000, f. 51r).

The fundraising campaign to acquire the St Cuthbert Gospel was the biggest that the Library has ever run. The single largest donation to the fundraising campaign was a £4.5m grant from the National Heritage Memorial Fund. Other major donors included the Art Fund, the Garfield Weston Foundation and the Foyle Foundation. There were many other donations from charitable trusts, foundations and hundreds of individuals and we are extremely grateful for every single donation which has enabled us to save this wonderful manuscript for the nation.

You can read the press release here.

An inscription added to the St Cuthbert Gospel in the 13th century, recording that the manuscript was discovered in 1104 "at the head of our blessed father Cuthbert lying in his tomb" (London, British Library, MS Additional 89000, f. ii verso).

As I don't know Latin Language. It would be most grateful if you can send me the content of St Cuthbert Gospel in English translation.
Thanks

Is there an English translation of the St Cuthbert Gospel ? If so, where can I find it ?

I to would appreciate a translation as Latin is not now day a typically learned language.

Just to let you know that the manuscript contains the Gospel of St John, so you'll be able to find a translation in any copy of the New Testament.

Good day I was wondering if you could tell me what is the oldest copy of St. John in the world and if you held that copy to the St. Cuthbert gospel would there be little or no difference, barring any :minor word variances? Thank you for any information you are able to provide!