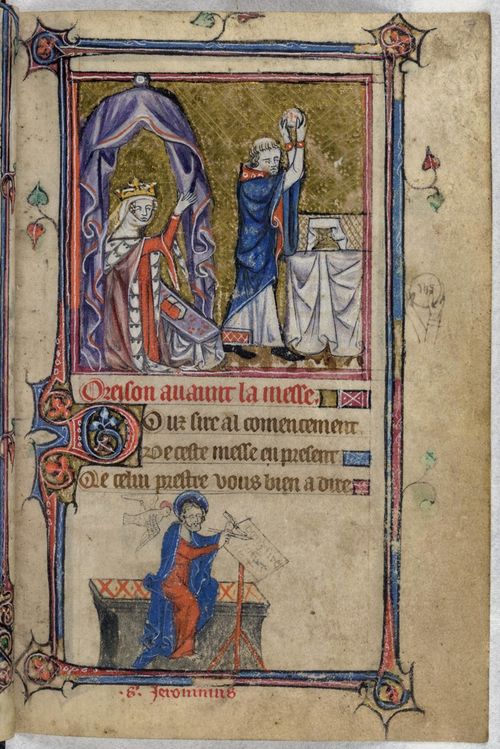 Miniature prefacing the prayers to be said at Mass, with a crowned woman (probably the first owner of the manuscript) kneeling underneath a canopy while a priest raises the host, and a bas-de-page scene of Jerome writing, inspired by the dove of the Holy Spirit; on his book is scribbled 'Douz sire (al) comencement,' the beginning of the text above.  From the Taymouth Hours, England (London?), 2nd quarter of the 14th century, Yates Thompson 13, f. 7.

Several sharp-eyed readers have noticed a number of suspicious visual similarities between the recently-discovered Unicorn Cookbook and another well-known manuscript in the British Library, the Taymouth Hours (Yates Thompson 13; see especially folios 85, 86, 107v and 188).

Given that, it seems like an opportune time to highlight the Taymouth Hours here, particularly since the manuscript is the subject of a soon-to-be-released monograph from British Library Publishing. 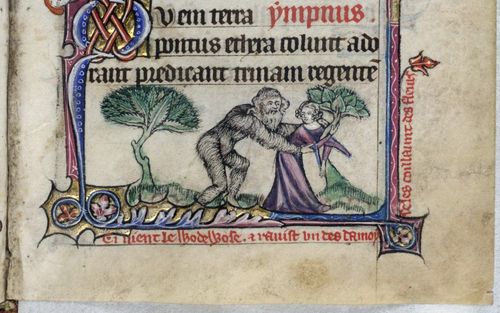 The Taymouth Hours was created in England (probably in London) in the 2nd quarter of the 14th century, and is one of the most famous manuscripts of its period.  Its renown is due in large part to its extensive programme of illumination; it contains an illustrated calendar and nearly 400 miniatures and bas-de-page paintings.  Many of these illuminations take their inspiration from the Bible, but there are also images drawn from bestiaries, lives of the saints, legendaries, romances, and tales of chivalry - with a number of grotesques thrown into the mix, of course.  Included as well are some scenes of daily life for the aristocracy.  For example, the section of prayers to the Virgin at Lauds (one of the canonical hours) is decorated with a remarkable group of 30 images showing noble ladies engaged in  hunting - with bows, with hounds, and even with spears. 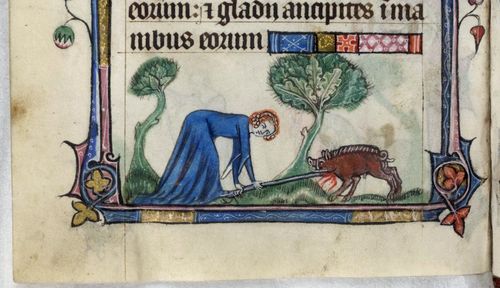 Detail of a bas-de-page scene of a lady killing a boar with a spear, from the Taymouth Hours, England (London?), 2nd quarter of the 14th century, Yates Thompson 13, f. 77v Detail of a bas-de-page scene of four ladies slaughtering a stage they have hunted, from the Taymouth Hours, England (London?), 2nd quarter of the 14th century, Yates Thompson 13, f. 83v

Part of the allure of the Taymouth Hours is the mystery surrounding its creation.  It seems likely that it was produced for a royal patron, and the prevalence of images of royal (or crowned) women in its illuminations indicates that it may have been commissioned by or for a queen (see the first image above, and below).  Scholars of the manuscript have variously argued that the original owner may have been Joan, the daughter of Edward II (who married David II of Scotland in 1328), Isabelle of France, or Philippa of Hainault, the queen of Edward III. 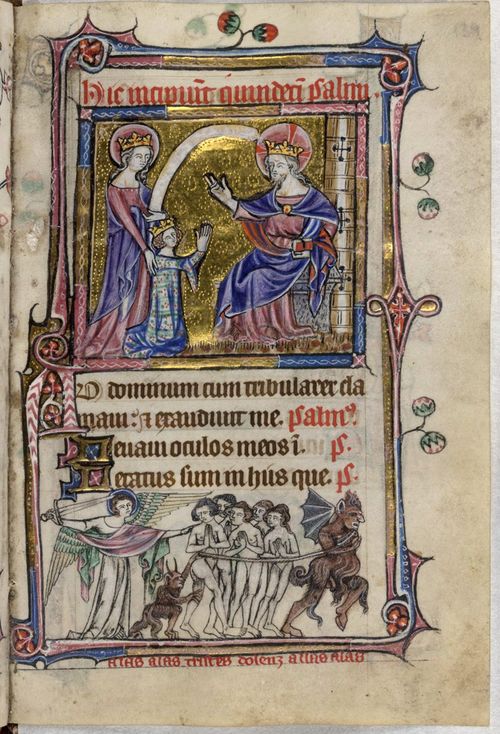 Miniature of a crowned royal woman (probably the first owner of the manuscript) being presented to an enthroned Christ by the Virgin Mary, and a bas-de-page scene of the Devil carrying souls off towards Hell, from the Taymouth Hours, England (London?), 2nd quarter of the 14th century, Yates Thompson 13, f. 139

An upcoming monograph on the Hours will seek to resolve this debate, among others.  In her book The Taymouth Hours: Stories and the Construction of the Self in Late Medieval England, Kathryn A Smith (Department of Art History, New York University) will argue that the Taymouth Hours was indeed commissioned by Philippa of Hainault, and was intended as a gift for Edward III's 13-year-old sister Eleanor of Woodstock, on the occasion of her betrothal to Reinald II of Guelders in 1331.  Dr Smith's book, which is the first comprehensive study of the manuscript, will also focus on the complicated relationship between the text of the Hours and the illuminations that accompany it.  The Taymouth Hours monograph will be available for purchase in May.  A DVD containing images of the entire manuscript is included; if you can't wait until you have the book in your hands, please see the fully-digitised version online here.

UPDATE (May 2012): Kathryn Smith's book has now been published, and can be purchased from the British Library shop

I don't want to spoil a consensus, but if this manuscript was commissioned by a woman for a woman, why on *earth* would there be a rape scene in it? Because that is what "tient le wodewose & rauist un des damoyseles" says... The audience does indeed seem plausibly female but I wonder very much about the commissioning interest. Someone there is urging that women stay in their group. Is this a complication that Dr Smith addresses?

@Jonathan Jarrett: Many medieval stories in various genres (romance, saint’s life, chronicle et cetera) included actual or threatened sexual violations. Many romances and hagiographies use such an episode as a catalyst (Chaucer’s ‘Wife of Bath’s Tale’ and ‘Physician’s Tale’, the romances of Chrétien de Troyes, and so on), and the heroes of some romances, such as ‘Sir Degaré’, were conceived in rape. Stories featuring such violations often had a broad audience, but might well have a specifically female one. Classical stories, such as that of Philomela and Lucretia (both retold by Chaucer _Legend of Good Women_) were popular. Medieval storytelling was often exemplary and didactic: audiences might be encouraged to emulate the ‘patience’ of their virtuous predecessors. Many stories offered templates of women suffering violence and sexual threats and authors might retell stories containing graphical violence as examples of patience. Often a saint’s martyrdom is rooted in the protagonist (often female, sometimes male) refusing to marry (e.g. Saint Philomena), or resisting sexual seduction, and being threatened or punished in various ways. Saint Agatha had her breasts cut off; this story was popular in the Middle Ages and frequently illustrated.
Sexual violation remains a staple of storytelling in our own time, often found in the hugely popular genre of detective fiction; much of this is written by women and, it is frequently shown (see this search http://bit.ly/1vpB3Kp, for instance; and cf. historical fiction), its audience is largely female.
Corinne Saunders’s book (http://www.boydellandbrewer.com/store/viewItem.asp?idProduct=11268) remains a very useful starting point for understanding the topic in relation to medieval storytelling.